Naval Radar Market to Grow at a Steady Clip, Geopolitical Tensions to Ramp up Demand

Today, most of the naval vessels are used for frontline combat in order to cater to maritime disputes and geopolitical threats thus heightening the adoption of powerful radar systems.

This has led to deployment and routine upgrades of existing naval fleets and offshore naval vessels thus augmenting the demand for naval radars.

Radar systems enhance detection capabilities, surveillance resolution and duration. Governments in major countries such as the U.S., Russia, China, India, France and Germany, have been investing significantly in R&D activities to enhance the capabilities of naval vessels.

This has resulted in the development of groundbreaking radar systems. Increasing military operations and coastal surveillance will propel the global naval radar market to grow more than two-fold during the forecast period (2019 – 2029).

Attributed to the optimistic demand for naval security, surveillance radars with improved technology are increasingly deployed to enhance detection capabilities and are anticipated to gain traction in the global naval radar market during the forecast period.

The proliferating defense economy with the introduction of advance technologies such as automated multi-role and multi-band radar systems are multiplying the demand for dedicated surveillance radar.

Navigation radars account for over 1/4th of the total market value. Navigational radars are used to identify, track and position vessels and also to safely navigate the ship from one point to another.

With the help of navigational radars, accidents can be prevented at sea. These benefits have further pushed the market towards a profitable future. 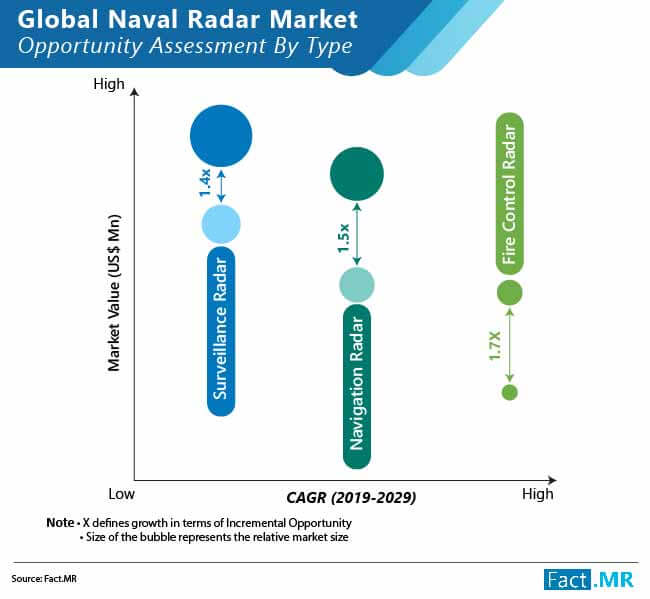 Market share of the region is estimated to rise further during the forecast period due to the increasing threats from terrorist outfits.

Matching with the global trend of naval fleet expansion, the Canadian government is also investing significantly in new vessel commissioning.

Within Asia Pacific, Southeast Asia & Oceania (SEAO) offer the most gainful opportunities with an astounding 5% CAGR from 2019 to 2029.

Increasing demand for surveillance radars for border surveillance, intelligence, and reconnaissance, and modern air defense systems, among others, are expected to drive the demand in the region during the forecast period.

Growing initiatives and political intent to rehabilitate the growth of shipbuilding industry in countries like China, South Korea and Japan are anticipated to be an important factor influencing the market growth.

Competitive rivalry is projected to be high among key players to acquire a higher share of the market.

Leading players such as

Market shares keep varying, as governments award contracts to companies and price value of one contracts differ from that of the other.

The strategy of focusing on high growth sectors and increasing the demand for enhanced radar solutions enables enterprises to enhance their product portfolio through up-gradation and new launches. Recently 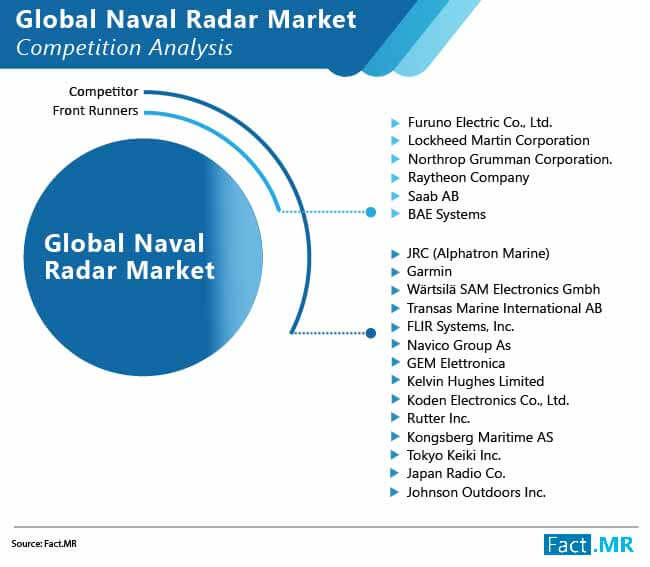 The global naval radar market is segmented on the basis of type and region.

This taxonomy and the detailed TOC prepared are confidential and intended exclusively for the individual or entity with whom it is being shared.

Reading, disseminating, distributing, or copying this to any party other than addressee(s) is unauthorized and prohibited.

Country-specific assessment on demand for naval radar has been provided for each regional market, along with the market size valuation and forecast price point assessment, price index and impact analysis of key regional and country-wise dynamics, which were obtained through quotes from numerous naval radar manufacturers, experts, and suppliers.

Y-o-Y growth projections have also been offered on all regional markets incorporated in the report.

Moreover, future trends, growth prospects, and other possibilities related to the market have been answered in the report.

The report provides company-level market share analysis, which has been derived on the basis of the company’s annual sales and segmental revenue in all the target end-use industries. The market has been forecasted based on constant currency rates.

Which are the major countries driving demand for Naval Radar?

Who are the prominent manufacturers of Naval Radar in the global market?