The global all-electric satellite market is estimated to grow at a dexterous CAGR of over 11% during the forecast period (2019-2029) and reach a value pool of over US$ 18 Bn.

The slowdown in global economic growth has had a certain effect on the global market for all-electric satellites.

Despite this, it is expected to retain a fairly optimistic growth through 2029. All-electric satellites are increasingly becoming the solution of choice for propulsion systems on board many types of satellite platforms over the last few years.

The most notable indication of this phenomenon is the ever-growing inclusion of all-electric satellites for telecommunication systems, which is fueling both increased demand for existing electric propulsion systems and the production of new components.

The industry is expected to see many more operators choosing all-electric satellite solutions as part of their future and current missions, with the prospect of low weight and longer mission lives attracting the operator’s attention.

The commercial communication application segment holds a notable share of more than 30% in the global all-electric satellite market.

With the increasing demand for satellite oriented services such as inflight connectivity, seafaring broadband services along with growth in the telecommunications sector, the demand for all-electric satellites in the commercial communication segment is anticipated to be the highest. 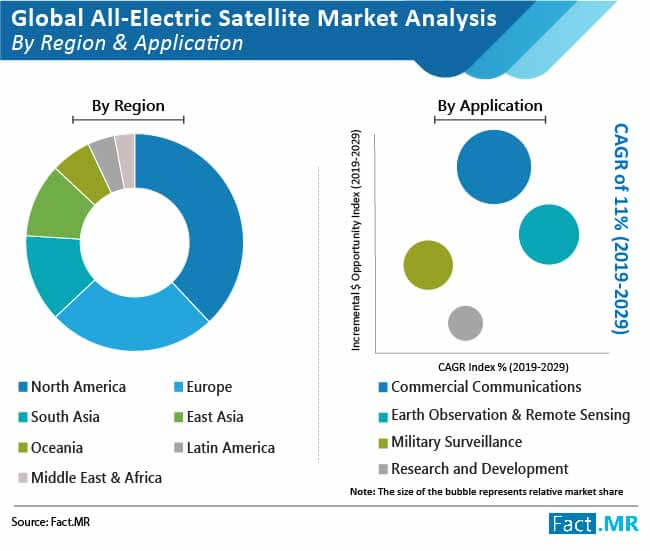 APAC to Lead with Burgeoning Demand from Communication Services

Presently, North America holds the most significant share in the global all-electric satellite market in 2018 (~35%). The presence of notable space organizations such as National Aeronautics and Space Administration (NASA) is attributing to such growth.

However, with the burgeoning demand for communication services in the APAC, it is anticipated that the region will increase investments in communication satellites during the forecast period and will exhibit a growth rate of over 14%.

Countries such as India, China and Japan, among others, account for the majority of the demand for sectors such as military and commercial communication.

This is due to government promotional policies to make their aeronautical, maritime and military industries healthier.

The global all-electric satellite market is consolidated in nature with a few industry giants such as Airbus SE, The Boeing Company and Ariane Group acquiring the top shares. 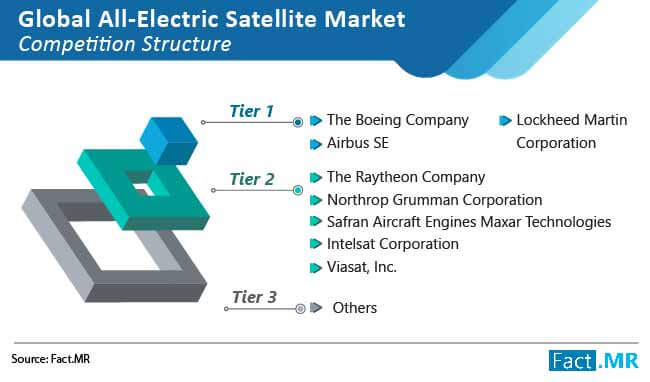 All-electric satellite manufacturers are now trying to figure out how to maximize their share of the electric propulsion market, while not ignoring more conventional customers.

Nevertheless, the allure of economies of scale and less reliance on foreign suppliers in the all-electric satellite industry makes vertical integration difficult to bear.

The global all-electric satellites market is segmented on the basis of propulsion type, satellite type, application and region.

This taxonomy and the detailed TOC prepared are confidential and intended exclusively for the individual or entity with whom it is being shared. Reading, disseminating, distributing, or copying this to any party other than addressee(s) is unauthorized and prohibited

Y-o-Y growth projections have also been offered on all regional markets incorporated in the report. Moreover, future trends, growth prospects, and other possibilities related to the market have been answered in the report.

The report provides company-level market share analysis, which has been derived on the basis of the company’s annual sales and segmental revenue in all the target end-use industries.

The market has been forecasted based on constant currency rates. The report provides detailed competitive and company profiles of key participants operating in the global all-electric satellites market.

Which segment has the largest share in the All-Electric Satellites market?

The largest segment in the All-Electric Satellites market is Application.

What is the CAGR for All-Electric Satellites market?

The CAGR of over 11% All-Electric Satellites market

Satellite Internet Market is anticipated to grow at an impressive CAGR of more than 8% and is poised...

Rich communication services market expects to grow at a CAGR of 14% by 2031. Rising media sharing, v...

Massive MIMO Market is expected to reach a valuation of US$ 71 Billion with TDD spectrum type massiv...