The global hydroxychloroquine market shall expand at a CAGR of ~4% during the forecast period (2020-2030). Hydroxychloroquine is a derivative of chloroquine and was primarily used to suppress and treat acute attacks of malaria. Eventually, hydroxychloroquine emerged as an ideal medicine for treating rheumatoid arthritis and systemic lupus erythematosus.

Rheumatoid arthritis is a highly prevalent disease requiring high-cost treatment in countries like the United States, France, and Germany. Due to its fewer side effects, it has become the most preferred drug over chloroquine. The current COVID-19 pandemic has given an upswing to demand for hydroxychloroquine drugs to be used as a viable treatment modality.

Hydroxycloroquine Production in India to Surge

COVID-19 has infected over three million people and resulted in over two hundred thousand deaths. Owing to the American government’s claim that hydroxychloroquine can act against the novel coronavirus, its demand has skyrocketed. Currently accounting for over one-third of the global confirmed cases, the United States is the worst affected country in the world.

To counter the deadly wave of infections, the United States government has sought assistance from the Indian government to help it procure 20 million pills of hydroxychloroquine by the end of June. Hydroxychloroquine market share of India is slated to be substantial in near term.

Similarly, other countries like Nepal, Sri Lanka and Bhutan have created significant demand for this drug. Attributed to above-mentioned facts the global hydroxychloroquine market is estimated to experience year on year growth of over 100% in 2020.

Due to the increasing prevalence of rheumatoid arthritis and a growing number of systemic lupus erythematosus patients in the region, North America is projected to maintain its dominance in the global HCQ market throughout the forecast period. In 2019, the United States accounted for over 30% of the global systemic lupus erythematosus, thereby increasing the consumption of hydroxychloroquine during the historical period.

With the United States being a leading consumer of hydroxychloroquine, North America accounted for nearly one-third of the global hydroxychloroquine market in 2019. This demand is poised to skyrocket by the end of 2020. 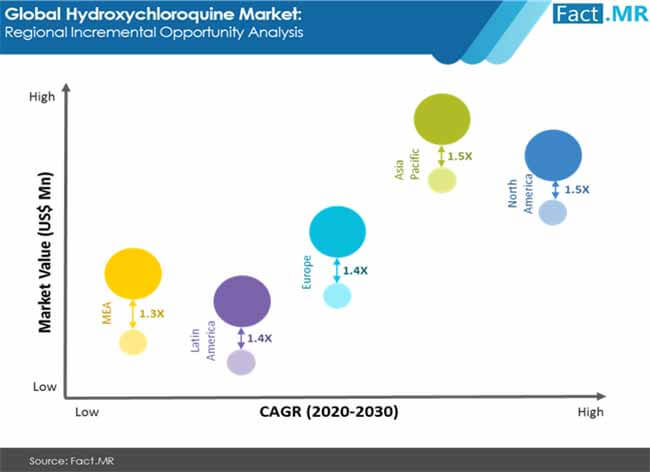 The global hydroxychloroquine market is highly consolidated in nature, in which the top five players accounted for over half of the global sales in 2019. Alone, Sino-Western Pharmaceutical, currently accounts for over three fourth of the Chinese market share. Dr. Reddy's Laboratories, Zydus Cadila, IPCA Labs and Mylan are the other key stakeholders in the global hydroxychloroquine market.

Similarly, Ipca Laboratories Ltd. has increased its production by 20 tons per month. Further, numerous companies like Bayer, Laurus Labs, Sun Pharma, etc. have pledged to donate millions of hydroxychloroquine tablets in their respective regions. However, due to skyrocketed demand hydroxychloroquine market price has doubled in recent weeks.

“Burgeoning demand for hydroxychloroquine due to coronavirus outbreak is set to witness two-fold growth by the end of 2020”, says the Fact.MR analyst.

Fact.MR has segmented the hydroxychloroquine market on the basis of drug type, and region.

Hydroxychloroquine Market - Scope of the Report

This newly published report sheds light on vital dynamics, such as drivers, restraints, and opportunities for key market players as well as emerging players associated with the production and supply of hydroxychloroquine. The report primarily conveys a summary of the market, considering the present and upcoming global rheumatoid arthritis and lupus erythematosus treatment market developments to reveal striking sides relating to the adoption of hydroxychloroquine across prominent regional markets.

A detailed assessment of the market supply chain analysis, business execution, and value chain analysis across the regional markets have been provided in the report. A list of prominent companies operating in the hydroxychloroquine market, enhance the reliability of this comprehensive research study.

The study offers an inclusive analysis on diverse features including demand, revenue generation, and sales by key players in the hydroxychloroquine market across the globe. A comprehensive study on the market has been done through optimistic and conservative scenarios. The analysis and estimation of price point comparison by region with the global average price has been included in this study.

Existing predictions of the hydroxychloroquine market, encompassing current as well as forthcoming values estimates, analysis on region-wise demand trends, and price index have been assimilated in the report.

The weighted sections have been elaborated in the report of the hydroxychloroquine market, which deliver projection on regional markets. These chapters highlight regional macros (political economic and business environment outlook), which are expected to have a momentous influence on the growth of the hydroxychloroquine market during the forecast period.

Country-specific valuation on the demand for hydroxychloroquine has been offered for each regional market, along with market scope estimates and forecast, price index, price point assessment, and impact analysis of dynamics in regions and countries. For all regional markets, Y-o-Y growth estimates have also been incorporated in the report.

The report offers the competitive scenario of the hydroxychloroquine market, along with profiles of prominent companies contributing to market expansion. Essential and up-to-date data as well as information correlated to market performers, who are principally engaged in the production and supply of hydroxychloroquine, have been presented with the help of a detailed dashboard view. The market share analysis and comparison of prominent players provided in the report permits readers to take preemptive steps in advancing their businesses.

Yes, the report on the radiation proctitis treatment industry has been compiled by expert analysts of Fact.MR, through a combination of primary and secondary research. To know more about how the research was conducted, you can speak to a research analyst.