Global dibenzyl toluene market to progress at a CAGR of 3.3% and reach a valuation of US$ 77 Mn by 2031. Currently, dibenzyl toluene captures 3.6% consumption share amongst all heat transfer fluids.

Overall, dibenzyl toluene consumption is set to reach 13 KT by the end of 2031, at a forecast volume CAGR of 2.8%. Moreover, dibenzyl toluene production in 2021 is estimated to surpass 9.8 KT, with approximately 33% of its total production being consumed in the European region, states Fact.MR, a market research and competitive intelligence provider.

Moreover, availability of various dibenzyl toluene grades (<98%, >98%) in the market upsurges its product range, accounted for by the fact that DBT <98% generates revenue 9X times of what is engendered by the >98% grade type.

According to Fact.MR, over the past half-decade, global volume consumption of dibenzyl toluene increased at a CAGR of around 2.4% and reached around 10 KT, of which, DBT as a heat transfer fluid accounted for around 4/7 of total consumption. Advanced properties of dibenzyl toluene such as its efficient cooling and high temperature-resistant properties allowed it to play a notable role in LOHC (Liquid Organic Hydrogen Carrier) systems.

Moreover, use of DBT used in the plastics and rubber industry is expected to cover significant volume of global consumption, standing at around 1.7 KT.

However, the COVID-19 pandemic had an impact on revenue generation capability of companies as production facilities were shut down and the demand-supply chain was affected. As such, a dip in value of DBT consumption and production was witnessed across the market landscape.

What are the Opportunities Awaiting Dibenzyl Toluene Producers in Germany?

The European dibenzyl toluene business accounts for a significant market share in the global DBT market as compared to other prominent regions. Germany holds the most possibilities for growth in futuristic demand in the region. Therefore, it will remain the main target market, specifically for the petrochemical industry.

Germany accounts for around 1/4 of total European revenue share, and the market is anticipated to progress at a CAGR of over 2.5%. This is due to the presence petrochemical and automobile industries fostered by favourable government stance for use of high-temperature-resistant DBT fluid in hydrogen transportation.

Attributed to the above-discussed factors, it is projected that Germany consumption of dibenzyl toluene will be around 4.1 KT in terms of volume, increasing at a CAGR of around 2% over the decade.

What is the Scenario for Dibenzyl Toluene in the U.S. Market?

Dibenzyl toluene sales in the U.S. are mainly driven by increased demand for dibenzyl toluene as a dielectric and heat transfer fluid. Moreover, the U.S. has an ambitious plan to make dielectric fluid suitable for transistors, capacitors, high-voltage cables, transformers, and switch gears.

Rise of the electrical industry in the U.S. is poised to provide lucrative opportunities for dibenzyl toluene suppliers to penetrate this particular end-use application. Attributed, to these factors, the U.S. is projected to provide an absolute $ opportunity worth US$ 2.2 Mn over the forecast period.

The U.S. is an emerging manufacturer of DBT by accounting for around 23% revenue share in 2020, and DBT demand in the U.S. is anticipated to increase at a CAGR of 2.3% through 2031.

Which End Use of Dibenzyl Toluene is Being Targeted by Manufacturers?

Research & development on DBT has proven it to be a promising material for hydrogen transportation. A single molecule of DBT can absorb 9 molecules of hydrogen. Moreover, it also offers increasing safety owing to its high-flame resistance, and non-toxic & non-explosive properties.

Furthermore, DBT works as a multiphase flow to release hydrogen back to the desired location, which portrays a clear picture of safe hydrogen transfer through the DBT LOHC method.

Hydrogenious has put up an experimental site Stuttgart, Germany, as a display to demonstrate DBT and its exhaustive list of abilities and safety provisions while transferring hydrogen at longer distances. European countries are looking for feasibility on the adoption of LOHC for the transportation of hydrogen to plants.

Mandating the use of the LOHC technique for the supply of hydrogen in the near future is set to drive demand for DBT.

DBT is projected to provide a notable absolute $ opportunity of US$ 4.7 Mn in the petrochemicals industry while expanding at a CAGR of around 3.4% over the decade.

Which Application of Dibenzyl Toluene is Anticipated to Dominate Global Revenue Share?

More than 15 metric tons, on an average, is charged into industries as heat transfer fluids. Moreover, its properties such as limited product decomposition, high flash point, low cold viscosity during shutdowns, ease of oil handling, and a bunch of other properties makes DBT a promising material for usage in chemical manufacturing plants.

Majority of users have shifted the demand curve of DBT. Moreover, increase in supply is also observed in the production of Arkema, Sasol (Eastman) and other companies, owing to increases demand for dibenzyl toluene. 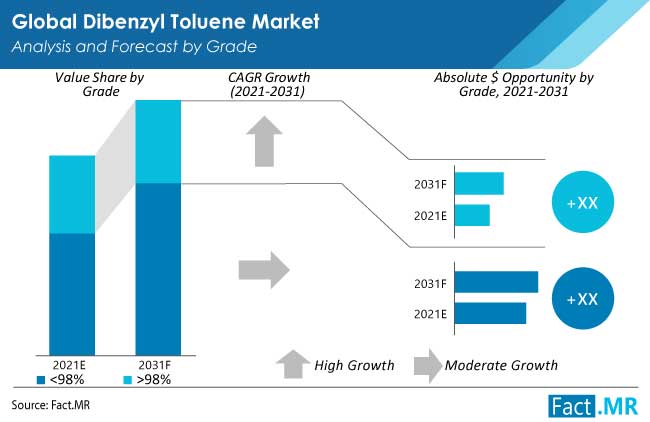 The COVID 19 pandemic left no industry unturned, and impacted sales of dibenzyl toluene too. Y-O-Y revenue growth saw a dip of 0.8% in 2020 when compared to 2019. This contraction can be attributed to decrease in DBT demand from the industrial sector along with reduced demand from the petrochemical industry.

Market players in the dibenzyl toluene business have mainly opted for organic growth strategies such as capacity expansion, product development, and innovation. These strategies are helping dibenzyl toluene key players expand their regional footprint and garner market share, thus providing them with a competitive advantage.

What is the expected worth of the market for dibenzyl toluene in 2021?

The global dibenzyl toluene market value in 2021 is set to be around US$ 55 Mn.

At what rate is the market poised to grow through 2031?

How has the performance of dibenzyl toluene been over the past half-decade?

Dibenzyl toluene sales rose at a CAGR of around 2.5% over the past half-decade.

What is a key trend identified propelling dibenzyl toluene sale?

Increased use of dibenzyl toluene in the oil & gas industry is a key trend being observed in the market.

What is the share of top 5 manufacturers of dibenzyl toluene?

Top-5 suppliers of dibenzyl toluene hold around 78% of the market share.

Which are the major countries driving demand for dibenzyl toluene?

China, Germany, and the U.S. are the main countries driving demand for dibenzyl toluene.

What outlook is being seen for the European DBT market?

Europe is projected to hold around 33% of global dibenzyl toluene revenue share.

Which countries are major producers of dibenzyl toluene?

At what rate is Germany dibenzyl toluene sales slated to increase?

Dibenzyl toluene sales is Germany are projected to increase at a CAGR of around 3.5% over the decade.

Crystal Growth Modifier Market to witness steady growth during 2020-2030. Demand from the electronic...

The cooling tower chemicals market is likely to witness healthy growth through 2028. The growing che...