Sales of performance coatings accounted for nearly 60% of the global coatings market at the end of 2021. Construction and defense are two dominant end-users that account for major revenue generation opportunities.

The Aerospace & Marine industries are changed as the primary consumers due to innovations in coating mechanisms. Traditional painted items are prevented from corrosion by performance coatings that helps to increase the life cycle and aesthetic nature.

Protection for materials including steel, aluminium, wood, galvanized and Non-ferrous metals for various industrial applications increases their life-cycle by performance coatings. Such measures fuel the demand for the market and bolster sales.

Over the 2017-2021 historical period, the global performance coatings market registered a CAGR of 4.7%, and according to the Fact.MR, a market research and competitive intelligence provider, the market is projected to exhibit growth at 5.3% CAGR between 2022 and 2032. 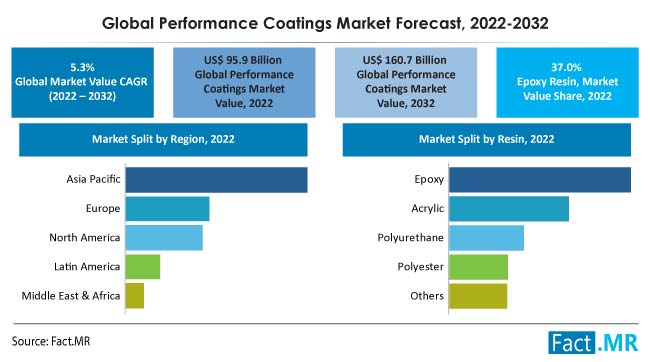 Market share analysis of performance coatings based on resin and region is provided in a nutshell in the above image. Under the resin segment, the epoxy sub-segment dominates with a 37.0% market share in 2022.

“Evolving Regulations Driving Innovation in the Field of Performance Coatings”

The amount of VOC content in coating goods is limited by strict environmental regulations in major markets such as North America and Europe. This has pushed producers of coatings to be green and sustainable.

Manufacturers invest extensively in research to produce new and creative goods at a reduced cost while complying with regulatory guidelines. Green technology is expected to evolve shortly as a leading technology. For instance, Nippon has developed coatings, which reduce the concrete spalling and also reduce the risk of fire and hazardous chemicals generation.

Moreover, environmental deterioration, along with changing customer tastes for buildings and the use of eco-friendly construction materials, would add to the consumption of powder coating. The adoption of powder coatings worldwide has been driven by strict regulations by the government and other recognized regulatory bodies to regulate VOC levels.

These materials deliver a range of environmental advantages compared to competition goods like anodizing or liquid PVDF paints. Such goods are easily approved by low levels of VOC emissions.

The world's major suppliers are expanding into new markets, while the emerging trend shows supplier consolidation, and global and regional coatings manufacturers are consolidating with world suppliers, leading to improved profitability for various market players.

Such targeted acquisition by key players has resulted in a moderately consolidated market and given impulse toward the growth of the performance coatings market.

As a result of high VOC emissions, the growth of coating market is uncertain. VOCs are environmentally harmful because they react with ozone-producing nitrogen, which depletes ozone.

This led to the establishment of VOC content limits on different market coatings by many environmental regulatory bodies such as the European Environment Agency (EEA).

This rule mandates limiting the amount of volatile organic compounds (VOC) in coatings products. This restricts the growth of the performance coatings segment, especially those companies whose emissions have crossed the limit of allowed emissions.

Three major components of conventional solvent-borne paints are pigment, binder, and solvent. Tiny additives are also used to boost the properties and consistency of the paint in different ways.

Even a slight fluctuation in raw material prices has a huge effect on paint producers' profitability and operations. For instance, India entirely dependent on the import of crude oil and its derivatives has suffered significantly due to growing prices and instability due to political reasons in the Middle East and imports nearly 90% of its requirements in the painting and coating industry.

Rising raw material prices create problems for the coating industry and resulted in squeezing profit margins. Consolidation can be a realistic solution to the current crisis, as key players in Europe embrace it more broadly. In addition to rising raw material costs, the pricing sensitivity in the supply chain has also troubled manufacturers in the recent past.

In the United States and Europe, the demand spurt for some raw materials has sent whole supply chains into a tizzy and without sufficient supply left for many manufacturers. During the forecast period, the availability of raw materials and high costs will probably remain the key problems for producers of efficient coating. Such instability has resulted in restricting the growth of the performance coatings market.

Which Factors Drive High Demand for Performance Coatings in India?

Why Europe Tops the Regional Chart for the Market?

Europe has always been a prominent investor in its military power. Statistically, France, Russia, and the United Kingdom have been investing a big amount of money in developing advanced weapons to strengthen their military power to conquer their enemies from miles away.

In addition, it is witnessed that the expenditure of Russia on weapon development and military expansion was high. Hence, it is estimated that Russia has a high demand for performance coatings over the period.

Hence, the invasion surpassed the weapons requirement for both countries and forced other economies to focus on their military advancements. This gives an impetus towards the requirement of premium high-performance coatings, which are supplied by numerous manufacturers.

Seeing the ever-rising defense spending by countries, manufacturers have started to develop products catering to the requirements of the defense industry.

For instance, Sherwin-Williams has come out with a new lineup of military coatings offering superior gloss preservation and weather resistance. Moreover, Akzo Nobel completed the acquisition of Mapaero, specialized in the structural and cabin coatings of aerospace segments, and later launched polyurethane topcoats under performance coatings in Aerospace in 2020.

These targeted product launches and acquisitions result in giving impetus to the growth of the overall performance coatings market.

The prompt shift in global production activities is anticipated to fuel the demand for coatings used in the production of motor vehicles, construction, and other durable goods, coupled with industrial maintenance applications. Such factors supplement the sub-segment growth over the projection period.

What Supplements the Growth of Water-based Formulations?

Strict environmental regulations developed by government agencies throughout the world have contributed to the adoption of traditional solvent-based coatings, especially water-based coatings.

Vital players are improving their supply network and establishing long-term relationships with goliaths such as Boeing, GM, and other end-users in the transportation sector in the market. For instance, BASF has strong supply bond with General Motors for the past two decades. Furthermore, AkzoNobel has created a strong relationship with the aerospace giants such as Airbus, Boeing, Lockheed Martin, Rolls Royce, and others. This, in turn, enhances revenue generation.

Worldwide demand for performance coatings is anticipated to value at US$ 160.7 billion by 2032-end.

Under formulation types- solvent-borne accounts for the major market share of about 75.2% in 2022.

The global performance coatings market is valued at US$ 95.9 billion in 2022.