Tunnel Lighting Market: About the Report

Tunnel lights have come a long way over the years, with energy-efficient, high-performance lighting that lasts long. LED lights have made their mark in this industry, as visibility is one of the most important features needed in tunnels.

Fact.MR’s report goes further and explains how advancements in data collecting techniques such as using sensors and state-of-the-art cameras have opened up many opportunities for various stakeholders in the tunnel lighting market.

Market players will be looking to Europe, which is the largest market for tunnels lights, and also to the Asia Pacific region, which is expected to boom over the next ten years.

Tunnel lighting has a wide range of advantages such as improving road conditions in a tunnel, reducing driver fatigue, improving tunnel capacity in order to ensure traffic safety, and improving visual enjoyment in a tunnel, among others.

Tunnel lighting allows safe entrance and exit of traffic, illuminating the tunnel interior in a way that enables drivers to adjust quickly to the light. This helps in avoiding any mishap and maintaining the drive through the enclosed area without obstacles and the need to reduce speed.

The global tunnel lighting market is expected to exhibit a growth rate hovering around 5% over the forecast period of 2020-2030, according to a recent report published by Fact.MR. The market is projected to reach a valuation of nearly US$ 3 Bn by the end of 2030, says Fact.MR.

Rising population, increased investments in infrastructure by governments and rise in global transport are expected to drive the global tunnel lighting market in the next decade. Moreover, increasing focus on road construction, reconstruction, and redevelopment of major road projects is expected to contribute significantly to the expansion of the tunnel lighting market size over the coming years.

Rising population is forcing nations to invest more in transportation infrastructure. Owing to this, the number of tunnel construction projects are on the rise, globally. This surge in construction of tunnels is fueling demand for tunnel lighting, which is expected to remain consistent in the near future.

Countries in the Asia Pacific region are investing more in infrastructure as part of their development strategies. This is expected to pick pace in the future. Countries such as India and China are leading the market in the region, as they are accelerating infrastructural development in both, road and rail transportation. These factors are expected to boost the tunnel lighting market in the next decade.

Growing demand for energy efficiency and sustainability owing to environmental concerns is projected to propel market growth in the near future. Stringent guidelines vary across geographical regions in the tunnel lighting market, which has made manufacturers focus on rolling out energy-efficient products. Countries across the world are focusing on improving transportation infrastructure, due to which, the tunnel lighting industry is moving aggressively in the forward direction.

Advancements in data collecting techniques such as using sensors and cutting-edge cameras are expected to enhance efficiency further. These low emission lighting systems have a definite role in the growth of the tunnel lighting market. 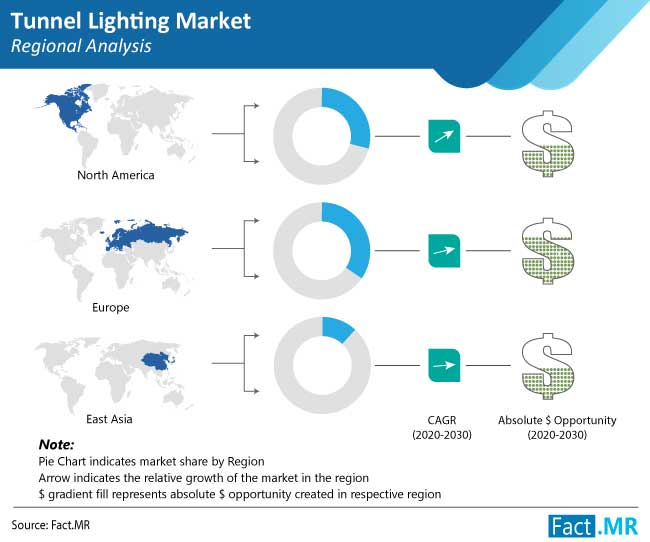 Europe, North America, and Asia pacific are key regions contributing most to the growth of the global tunnel lighting market. Europe is projected to emerge as the most lucrative market for tunnel lighting over the forecast period. Rising government initiatives and support along with investments towards the adoption of energy-efficient lighting solutions are key driving factors for the growth of the market in the region.

LED lighting in Europe is anticipated to account for more than 90% of the entire luminaire market, as per the Global lighting Association in 2020. North America is another major market for tunnel lighting. This regional market is expected to experience prominent growth over the forecast period as well. Meanwhile, Asia Pacific is projected to witness the highest growth during the forecast period.

The region is expected to experience the highest growth rate of LEDs in the tunnel lighting market by the end of 2030. However, the Middle East and Africa and South America are expected to witness slow growth in the next decade.

Tunnel lighting is segmented based on shape as linear, round, square, rectangular, and others. Linear-shaped lighting is the most lucrative segment among all the shapes, followed by rectangular lighting. This dominance is expected to continue over the forecast period as well.

Segmentation based on installation is done as surface mounted, hanging, and recessed/side wall mounted. Out of these types, surface mounted tunnel lighting is expected to be the most lucrative segment over the forecast period.

Presence of several international as well as regional players makes the global tunnel lighting market highly competitive. Key players in the market are focusing on collaborations and partnerships to expand their reach across the world. Furthermore, companies are investing in research & development to find new applications of tunnel lighting in order to stay ahead of the competition in the market.

This comes in the wake of the industry's rapidly growing need for high-performance lighting for longer duration.

The actual impact of the COVID-19 pandemic over the tunnel lighting industry was overrated initially, and a while later, the industry was in a dilemma as global shutdown of commercial establishments began. As this industry mostly deals in megaprojects, the long-term impact will be minimal. Thus, the industry came to terms with the situation presented by the pandemic in a short period. Currently, this industry is performing at the same pace as it was before the onset of the pandemic.

However, the workforce in the industry had a definite impact for a short period of time, as production was halted due to social distancing norms. As of now, the tunnel lighting market has gathered momentum and is moving forward steadily, as governments are refocusing on mega infrastructure plans and investments. Furthermore, the industry has utilized this period to plug loopholes and enforce a concrete future plan.

What is the expected market growth of Tunnel Lighting Market?

The global tunnel lighting market is expected to exhibit a growth rate hovering around 5% over the forecast period of 2020-2030.

What is the estimated market value of Tunnel Lighting by 2030?

Fact.MR predicts the global tunnel lighting market to cross a valuation of US$ 3 Bn by the year 2030.

Which regions are expected to dominate the Tunnel Lighting Market during 2020-2030?

Europe is the most lucrative market for tunnel lighting followed by Asia Pacific.