However, automotive LED light industry has witnessed significant growth in the last half-decade due to increased demand for luxury automotive vehicles consumption globally. The rising human population may drive the demand in the coming years.

The automotive LED light industry vale has witnessed a significant increase of nearly 5.6% CAGR during 2017 & 2021. The global automotive LED light market has created an absolute $ opportunity of around USD 1.4 Billion in the last half-decade. It is considered to offer an absolute $ opportunity of almost USD 3.5 Billion and USD 5.8 Billion amidst short-term (2022-27) and long-term (2022-2032) respectively.

Further, the Chinese automotive LED light market has acquired nearly 1/3rd market share in the East Asian market. It is projected to move ahead at a CAGR of 7.1% and generate an absolute $ opportunity during the assessment period.

In addition, South Asia & Oceania automotive LED light market has grown significantly in the half-decade. It has gained nearly 1/4th market share in the global automotive LED light market at a CAGR of 8.8%. Besides, South Asia & Oceania is projected to gain 291 BPS and generate an absolute $ opportunity of around USD 1.7 Billion during the forecast years.

As per segmental analysis, the applications of automotive LED light in Headlamp grew 1.4X in the last five years and it is anticipated to expand by 2.1X in forecast years. Moreover, the sidelights are likely to mount at 9.5% CAGR and offer an absolute $ opportunity of nearly USD 1.2 Billion during the forecast period.

What is Global Automotive Scenario?

The global sector is currently in a period of stabilization, with sustained sales sustaining growth for suppliers and OEMs. However, in an industry undergoing one of the most profound transformations, the future appears to be bleak. The auto industry has always been intensely competitive, with OEMs in the United States, Germany, and Japan relying on incremental updates to maintain their position.

There have been numerous criticisms regarding inadequate visibility along the roads particularly in the nighttime when it becomes challenging to view other vehicles approaching from the distance. Nearly half of the fatal vehicle accidents take place at the night.

Further, LED lightings in automotive has facilitated the users to endure a safer motor journey providing significant visibility that can be derived from the automotive LED lighting in the headlights. The Automotive LED lighting market is anticipated to showcase robust growth over the forecast period owing to their better power efficiency and longer life cycles as compared to the conventional HID lights.

This study assesses trends, promoting the growth of each market sector on a global scale, and provides inherent takeaways that will be extremely beneficial to other potential market participants in the automotive LED lighting market.

The automotive LED lighting market is anticipated to grow significantly due to the increasing utilization of LEDs in the vehicle ranging from energy-efficient solutions to creative and fancy installations. An enormous potential has been observed in the market for automotive LED lighting which is most likely to expand its horizons with the introduction of new technologies such as OLEDs (organic LEDs).

Organic LEDs produce homogeneous light gravelling a new pathway for market growth. Moreover, the penetration of LED lighting into the interior automotive lights segments such as indicator lights in the car body, backlighting LED displays, etc. provide ample opportunities for the product in the global market.

What is the North American Automotive LED Light Market Scenario?

North America is the 4th largest market shareholder which has generated tremendous growth opportunities with the growth of 6.5% CAGR in the last half-decade. It is likely to grow at the CAGR of 7.6% and offer absolute dollar opportunities of nearly USD 1.6 Billion by the end of 2032.

The Asia Pacific markets have been bifurcated into two key markets such as East Asian LED light market and South Asia & Oceania LED light market. South Asia and Oceania automotive LED light market is the most lucrative market from the growth as well as profit perception. India has captured more than 1/3rd market share of the regional market and is likely to grow at the CAGR of 9.3% and generate substantial absolute dollar opportunity. 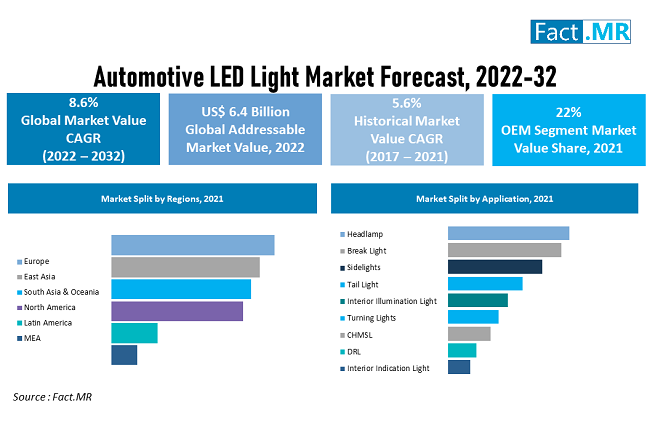 Which Application of Automotive LED Light is expected to be the significant Contributor through the Assessment Period?

Two leading segments of the global automotive LED light market i.e. Headlamp and Break Light which collectively holds for over 40% of the market share in terms of value, is likely to imitate steady CAGR of 10.3% and 9.5% respectively throughout the forecast period and continue its dominance in application segment for automotive LED light.

Further, aftermarket sales channel is projected to grow at 8.2% CAGR during the forecast period. This is estimated to lose 52 BPS amid 2022 & 2032.

The spread of LEDs in the general lighting sector has ushered in a new era of severe competition, shrinking net profitability, increasingly homogeneous goods, and business models. The industry's innovation has stalled. To deal with such market constraints, several companies have shifted their focus to specialist lighting sectors, such as automotive lighting, which has a higher entry barrier and higher earnings.

For instance: On 1st October 2021, General Electric Company has partnered with True Value. True Value is the only hardware channel distributor of GE.

What is the global Automotive LED Light Market scenario?

The global value of automotive LED light market is estimated to be worth over USD 6.4 Billion in 2022.

What was the last 5-year CAGR for the demand in the automotive LED light market?

Who are the prominent players in the global automotive LED light market?

Which is the most leading region in the automotive LED light market?

Reactor Thermoplastic Polyolefin Elastomer (TPO) Market to grow at a CAGR of over 4% during, 2021-20...