The market is expected to garner absolute dollar growth of US$ 117.8 Billion by 2032. Expansion of the market can be attributed to the growing adoption of modern technologies like the Internet of Things (IoT) and machine-to-machine (M2M). Also, increasing application of millimeter-wave technology for 5G fixed wireless access is anticipated to augment the 5G fixed wireless access market size in the forecast period.

Moreover, the rising demand for high-speed internet and broad network connectivity with less latency is another salient factor that can bolster the market in the forthcoming years. Furthermore, favorable initiatives of the various government are anticipated to support the market growth.

In May 2022, the U.S government launched its US$ 45 Billion “Internet for All” initiative to offer affordable and high-speed internet to Americans. Such factors are expected to benefit the market in the assessment period.

By the end of the 2019-2021 period of assessment, the global fixed wireless access market garnered US$ 1.5 Billion, while expanding at a CAGR of 128.8%. The robust growth of the market can be attributed to the growing demand for low latency and the emergence of M2M and IoT connections.

As per Ericsson, the 400 Million IoT devices with cellular connections in 2016 are likely to reach 1.5 Billion in 2022. This massive growth is expected to have benefitted the market during the aforementioned timeframe. Also, the advent of the Industrial Revolution 4.0 is assisting cellular connectivity rise, expansion of IoT, and machine to machine connections. This is projected to be another factor that aided the market expansion from 2015 to 2021.

The global 5G Fixed Wireless Access (FWA) market, during the timeframe of 2022 to 2032, is anticipated to expand at a CAGR of 43.6%, while amassing a revenue worth US$ 121 Billion. Expansion of the market during the given timeframe can be attributed to various benefits offered by the 5G as a transformational technology.

Also, the growing demand for connected devices for long-range connectivity is projected to boost the growth of the market for M2M/IoT communication equipment, such as; livestock monitoring, smart streetlights, and smart parking systems. The rapid rise in demand for M2M technology is expected to favor the adoption of connected devices, thereby, augmenting the market size in the forecast period.

Evolving economies such as; India, and China, have recognized the importance of M2M and are taking initiatives to enhance the penetration of M2M, which will benefit the market in the forthcoming years. For instance, the Indian government commenced the Digital India campaign to highlight the importance of digitization.

The movement propelled the demand for smart technologies. As per FICCI, India is expected to have 5 Billion devices by 2022. Also, growing favorable initiatives by players can benefit the market. For instance, in May 2022, Wireless Tech and Semiconductor, Qualcomm India, announced a vacancy for 100 techies for the job role that would support the development of 5G WLAN, and 5G Fixed Wireless Access.

Such initiatives, taken by developing countries are expected to benefit the industry in the forecast period.

Growing awareness about the benefits offered by M2M connected is likely to play an important role in strengthening the market in the coming time. Also, its benefits have been recognized by various sectors such as; automotive, fleet management, traffic control, and security, among others. Owing to the aforementioned factors, the market for the 5G fixed wireless access market is expected to flourish in the coming time.

Increasing demand for 5G FWA in various sectors owing to its benefit is expected to provide significant opportunities for expansion in the coming period. Also, there has been an increased demand for wireless sensors in smart cities that are useful in regulating environmental and pollution, traffic management, smart parking, and security surveillance. Such factors are expected to benefit the market in the coming years.

For instance, in May 2022, UScellular, a U.S-based Cellular Corporation, launched mmWave-based FWA in 10 cities. UScellular offers home broadband service using LTE in all of its markets, however, the new service introduced uses 5G and mmWave spectrum. Such initiatives are expected to favor market growth in the coming time.

Additionally, deployment of 5G in various other sectors such as; healthcare, automobile, telemedicine, and various business segments can develop the market size in the assessment period.

High costs associated with 5G FWA are expected to hinder the market growth in the forecast period. Also, delayed decisions announced with respect to standardization of spectrum allocation are also likely to hamper the industry growth during the assessment period. In addition, adverse impacts on the environment can further limit the market expansion in the coming time.

The millimeter-wave spectrum faces several challenges, such as; high costs associated with components, high precision in manufacturing of small components, and various others.

Such disadvantages are anticipated to block the market growth in the coming time. However, with rising opportunities in the market and the growing application of smartphones, and other smart technologies, the industry is expected to witness expansion opportunities and also act as a significant counter to impeding factors, thereby, pushing the industry to grow in the assessment period. 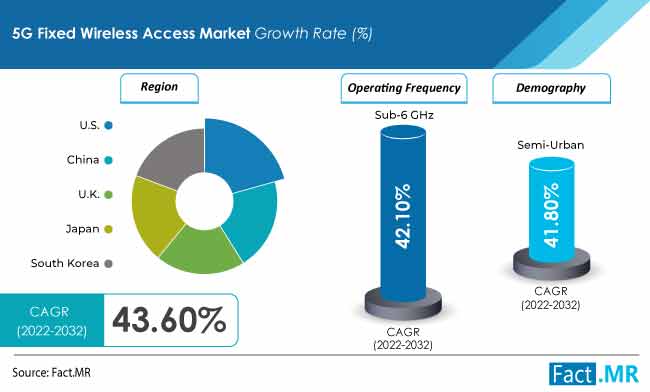 The analysis reveals that the global 5G fixed wireless access market is anticipated to be dominated by North America. In the region, the U.S is projected to lead the market in the forecast period. The estimated market value of the country is US$ 43.2 Billion while recording a CAGR of 43.3% during the forecast period. The growth of the market can be attributed to the presence of established players in the region.

Increasing favorable initiatives taken by players and the government to reduce the digital divide in the region are expected to strengthen the market growth in the forecast period. In February 2021, Qualcomm Technologies announced the new updated features to the Qualcomm Fixed Wireless Access Platform Gen 2. The new features will help in proliferating the adoption and deployment of FWA, which will benefit the market in the long run.

Also, with the presence of sufficient funds, rapid digitization, participation of players, and growing awareness, the market in North America is expected to flourish significantly in the forecast period.

Why is APAC Projected to be the Most Lucrative Market During the Assessment Period?

As per the analysis, in APAC, China is expected to take the lead. The country is anticipated to garner a market value of US$ 8.7 Billion while expanding at a CAGR of 42.7%. Other lucrative regions such as; Japan and South Korea are projected at US$ 7 Billion and US$ 4.4 Billion, respectively. The growth of the market can be attributed to the presence of the fastest-evolving countries such as; India, China, Japan, and South Korea.

Smart city initiatives in India, China, and other developing nations are likely to contribute to the growing demand for 5G FWA, which is expected to benefit the market in the assessment period. The region is witnessing a transformation in terms of adopting modern technologies and development across various sectors. Also, with the advent of the Industrial Revolution 4.0, the regional market is likely to flourish in the forecast period.

What is the Contribution of the Sub-6 GHz Segment in Driving the Global 5G Fixed Wireless Access Market?

According to the analysis, the sub-6 GHz segment is expected to dominate the market during the forecast period. The anticipated growth rate is 41.8% during the time period from 2022- to 2032.

The growth of the segment can be attributed to the growing deployment of 5G networks by telecommunication operators in their sub-6 GHz frequency spectrums. The number of companies that invested in 5G networks has surpassed 140, and the number will increase significantly in the coming time, which will benefit the market.

The semi-urban segment is expected to record a CAGR of 41.8% during the forecast period from 2022- to 2032. Expansion of the segment can be accredited to the fact that in semi-urban areas, there is a sparse population. Therefore, these areas demand higher investments to connect with a network through wireline infrastructure.

Players in the global 5G Fixed-Wireless Access market are taking various initiatives to strengthen their position in the market. Continuous efforts are taken by players to offer unique services. With such efforts, the global market for 5G Fixed Wireless Access is anticipated to be highly competitive. Some recent developments in the region are:

The global 5G fixed wireless access market is estimated to expand at a CAGR of 43.6% during the forecast period

The Sub-6 GHz segment is expected to dominate the market while recording a CAGR of 42.1% during the forecast period

The semi-urban segment is projected to dominate the market while expanding at a CAGR of 41.8% during the forecast period.