As per Fact.MR – market research and competitive intelligence provider, during the historic period of 2017 to 2021, the market expanded at a CAGR of around 4%. Mounting instances of appetite loss among the aging population has led them to spend more on fortified and functional food.

The growing requirements for nutrition-rich food among health-conscious consumers have led manufacturers to incorporate health-benefiting ingredients such as vitamin premixes.

Food manufacturers are utilizing various ingredients to enhance the appeal, flavor, and functionality of food products. Nearly 735,000 tons of food premix is estimated to be sold globally by 2032-end.  Considering the aforementioned factors, the market for food premix is projected to touch US$ 2.73 Bn by the end of the forecast period (2022-2032).

Will the Rising Demand for Food Fortification Impact Growth?

Demand for food fortification is on a significant rise, driven high prevalence rate of the micronutrient deficiency diseases among the population worldwide, which in turn has propelled the cases of malnutrition. Food products such as sugar, flour, maize, vegetable oils, and wheat are generally fortified with minerals and vitamins for ensuring better health, which in turn has been driving demand for food premix over the past few years.

Consumption of nutrient premix, such as amino acid-based infant formula, is also showcasing a surge, driven by the growing preference of consumers for nutritional fortification of baby food products and infant formula.

In addition, Ingredients such as arachidonic acid (ARA) and docosahexaenoic acid (DHA) are also being added to food premix along with vitamins and iron, which in turn has proliferated the adoption of food premixes.

Will the Children’s Consumption Propel the Market Growth?

A large number of pre-school and school-going children between the age group 2 and 12 years old are affected with anemia, with a majority among them suffering from iron deficiency. Point-of-use food fortification with micronutrient powders has been recommended for trimming the prevalence of pediatric anemia.

In order to assess its effectiveness, researchers as Micronutrient initiative in Canada, WHO, and Centers for Disease Control and Prevention (CDC) in the U.S., have conducted a review of quasi-RCT and RCT trials. According to the research, point-of-use food fortification with micronutrient powders that comprise iron has the potential to alleviate iron deficiency and anemia in children.

The focus of future research regarding the same is being directed toward increasing the evidence on adverse effects, developmental outcomes, morbidity, and mortality. Developments such as these are likely to significantly influence the growth of the global food premix market in the upcoming years.

Why is the U.S a Highly Lucrative Market for Food Premix?

The United States food premix industry is projected to hold the maximum share and is predicted to remain the most lucrative across North America. Increasing population is one of the key factors behind the rising consumption of food premixes.

Considering this, the manufacturers of food premix are using this opportunity to strategically attain growth. In addition to this, the prevalence of large-scale food processing factories in the region is propelling the demand for food premix.

Furthermore, consumer demand for convenience products, offering taste good and health benefits. Furthermore, the cost-effectiveness of food premix is likely to drive the evolution of food premixes in the food and beverage industry. As per Fact.MR, the U.S is forecast to register a CAGR worth 6% until 2032.

What’s Bolstering the Growth of Players in India?

According to Fact.MR’s analysis, the Indian market for food premix is projected to show a significant growth rate, at a CAGR of 5.5%. In India, the food sector has emerged as a high-growth and high-profit sector due to its immense potential for value addition, particularly within the food processing industry. The growth of the market is attributed to the increasing urbanization, the introduction of various HoReCa chains, and changing lifestyles.

In addition to this, the rising middle-class income and an increasing number of working women have led to increased meat consumption. This boosts the demand for feed premixes since poultry is the most preferred segment for meat consumption in India.

The companies across Europe are entering into partnerships and mergers to hold a greater market share. They are spending more on R&D projects and offering products with the latest technology and maximum efficiency. The per capita spending on healthy and nutritious food is increasing across the European region and people’s desire to remain fit has brought about an incremental shift in food expenditure.

These factors have generated significant opportunities for players to invest in the regional markets over the forecast period. According to Fact.MR, revenues from sales of food premix in North America and Europe will collectively account for over 3/5th revenue over the period of forecast. 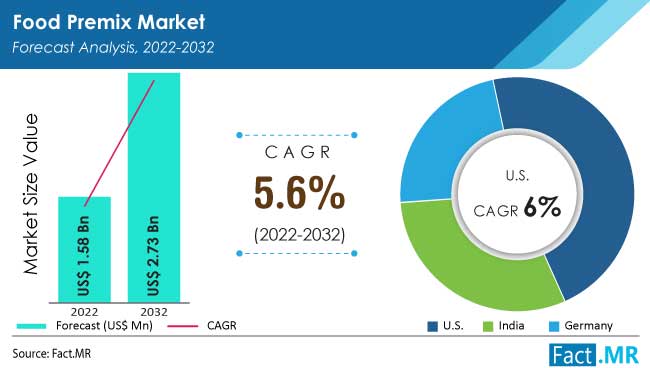 Why Form of Food Premix is Turning Out to Be the Most Lucrative One?

According to Fact.MR’s analysis, the powder form of food premix is expected to be sought-after among consumers worldwide in the upcoming years, on account of their ease of use and storage convenience. Revenues from sales of powdered food premixes will remain considerably larger than those procured from liquid food premixes.

What Share does Amino Acids Hold as an Ingredient Type?

Amino acids will endure as the preferred ingredient type in food premix, with an envisaged market revenue share of over 33% from 2022 to 2032. Revenue shares of vitamins and minerals in the market will also remain significant. Sales of nucleotides will record the fastest sales expansion in the market, in terms of value, through 2032.

Which is the Most Prominent Function of Food Premix?

Weight management and energy will continue to be preferred functions in food premix among consumers, so as to curtail challenges related to obesity and overweight, highly prevalent pandemic ailments.

What Kind of Application is significantly contributing to Growth?

The competitive landscape of the food premix market is shaped by product innovation and strategic mergers & acquisitions. Front Runners are emphasizing capacity enhancements and global footprint expansion to leverage lucrative prospects in developing economies. Some notable developments are as follows:

The global market for food premix is envisaged to account for over US$ 2.73 Bn by 2032.

Rapid urbanization & a rise in middle-class population with higher GHDI are projected to offer significant growth opportunities for sales in the market.

The U.S is expected to register a CAGR of 6% with respect to food premix sales