For example, National Fire Protection Association (NFPA) has developed the NFPA 2112 standard, which imparts minimum requirements for design, development, evaluation, and certification of the flame resistant and retardant garments used by industry personnel.

According to this standard, the flame resistant and retardant garments must not contribute to burn injuries of the wearer, provide high-degree of protection, and reduce severity of burn injuries that result from short-term thermal exposure or accidental exposures to flash fires. 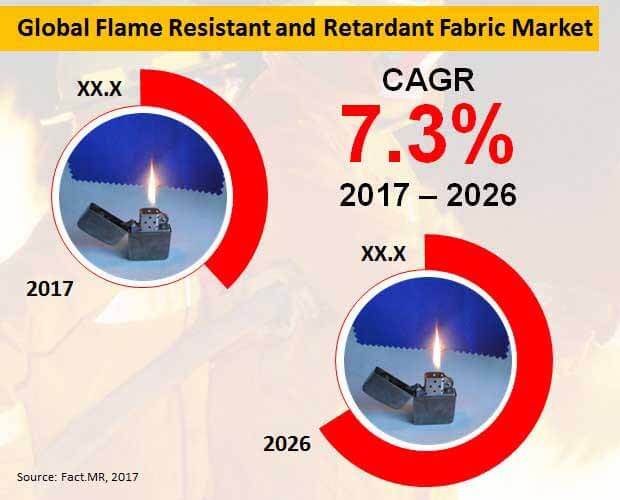 Robust demand for flame resistant and retardant fabric for application in the production of protective clothing for fire fighters, naval & armed forces, and miners, is a key growth determinant for the market.

For example - anti-flash gloves and hoods derived from Kevlar are currently being used by Royal New Zealand Navy (RNZN), and a flame retardant jute-based fabric has been developed by the IJIRA – Indian Jute Industries Research Association, for use as brattice clothing by coal miners.

There is a growing requirement of flame retardant materials that have textured surfaces in engineering and industrial applications.

Recognizing the need, a group of researchers at Defense Institute of Advanced Technology (DIAT) have developed a nano-engineered polymer-based fabric particularly for applications in the space industry and armed forces personnel.

This fabric developed by DIAT is highly flame resistant and retardant to hyper-saline solutions, and is also capable of withstanding ultraviolet radiation and low temperatures.

This nano-engineered polymer fabric exhibits excellent integrity when exposed to chemical attacks as well as low and high temperature.

Apart from space exploration and military applications, this fabric can also be effectively used in other security forces including air force and the navy.

Post-high uncertainty in oil & gas industry over the past few years, which was influenced by a plethora of factors including the advent of shale oil production, oil cost-cutting measures, and falling oil prices, offshore production has experience a downward trend.

However, with stabilizing oil prices the offshore oil & gas exploration industry’s outlook for the future seems promising, with several large projects impending to be deployed such as Bonga Southwest, ACG and Mad Dog Phase 2.

Alarming number of fatalities and injuries have been associated with workers in the oil & gas industries, according to the Occupational Safety and Health Administration (OSHA).

Recognizing the concern of these workers, OSHA rolled out an official memo, which compels oilfield companies to provide workers with flame retardant clothing, to the entire oil & gas industry.

This resulted into a dramatic decline in the number of fatalities in the industry with respect to fire to and explosion, according to a comparative analysis carried by Bureau of Labor Statistics in 2016.

Increasing oil & gas exploration activities coupled with innate requirement for fire retardant and resistant clothing in the industry will drive the market growth in the near future.

This report also offers a scrutinized study on the global market for flame resistant and retardant fabric in terms of a segmentation analysis.

The market has been divided into 5 key segments, namely, by weight, thickness type, end-user, application type, and region.

These segments have been analyzed in detail, engulfing market forecasts and estimates at a country and regional level.

The segmentation analysis offered can be useful for the report readers in understanding probable opportunities and potential markets for the target product – flame resistant and retardant fabric.

A taxonomy table incorporated in the report illustrates all the market segments in a systematic manner as depicted below.

The global military rifle market is projected to be a multi-billion dollar market by the end of the ...

The woodpecker tools market is set to witness steady growth during 2021-2031. Furniture manufacturin...