Demand for glyoxal in oil & gas sector will continue to thrive, with a documented CAGR of 4.7% during the 2015-2021 historical period of assessment, while demand for Glyoxal in the textile industry proliferated at a rate of 5% during the same period. China will dominate the global market, registering a growth opportunity worth US$ 455 Million from 2022 to 2032.

Fact.MR has predicted the glyoxal market to incline at a 4.4% CAGR between 2022 and 2032 in comparison to 5.3% CAGR throughout the historic period. The rising trend of electric vehicles and the robust strength of black glyoxal are considered the prominent glyoxal market drivers across the globe.

Manufacturers are making specific innovations in improving the quality of materials and are adopting SiCa as a vital alternative for making semiconductors. This will increase the demand for glyoxal in electrical and other end-use industries. From 2022 to 2032, the market is poised to expand 1.5x.

Also, one of the industry titans, BASF SE, is engaged in formulating a co-biocide using a blend of glyoxal and glutaraldehyde in disinfectants used in veterinary hygiene and the health industry. Identification of glyoxal as a potential substitute for formaldehyde and glutaraldehyde is likely to generate lucrative opportunities for the glyoxal market in the future.

Governments globally are concentrating on reducing carbon footprint by daunting numerous regulations and norms. As per the OECD guidelines 301C-E & 303A, owing to its decomposable existence, glyoxal is considered environmentally friendly, displaying a decrease in organic carbon content by more than 90%. Owing to this, glyoxal is espoused in numerous applications oscillating from textile to oil & gas.

Prices of the raw material needed to produce glyoxal are volatile and are constantly changing, however impacting its application in various industries. Also, the availability of raw materials may impact the overall glyoxal production which will further hinder the continuous supply of glyoxal.

How Opportunistic are Growth Prospects across the U.S Market?

A Burgeoning Packaging Industry to Aid Expansion in North America

Glyoxal Market in North America is anticipated to record a significant revenue growth rate during the forecast period. Augmented consumption of textile chemicals for application throughout various stages of fabric processing pushes market growth as demand for apparel upsurges in North America.

The demand for technical textiles is projected to cultivate rapidly as a result of their usage in an extensive range of applications, including chemical, manufacturing, and medical. As a result, the demand for glyoxal is likely to upsurge, backed by the mushrooming oil and gas sector in the region. Furthermore, increasing glyoxal applications in end-use industries such as cosmetics, pharmaceuticals, and agrochemicals, will propel the growth of the glyoxal market in the U.S region

Fact.MR’s analytical report summarizes that the North American Glyoxal Market is forecasted to reach US$ 350 Million by 2032-end, reaching nearly US$ 215 Million in 2022. The aforesaid market in the region is likely to expand at a CAGR of nearly 5% during the forecast period.

Why are Glyoxal Providers Venturing into China?

Soaring Investment in the Industrial Infrastructure to Push the Glyoxal Demand

China is projected to be the largest glyoxal market, accounting for nearly 65% market share in 2021. This growth is primarily driven by the high-scale investment by the government for the advancement of industrial infrastructure in the region. Additionally, collective domestic demand for textiles and chemicals due to the increasing population is also stimulating the market towards positive growth.

Besides, mounting exports, growing middle-class population, government initiatives to support industrial growth, and accessibility of raw materials act as critical factors for the growth of chemical, textile, and paper industries, which in turn are accountable for the stellar growth of this region in the glyoxal market.

Fact.MR’s recent analysis depicts that the foresaid market is estimated at nearly US$ 265 Million in 2022, likely to expand to US$ 455 Million by 2032 end. Throughout the forecast period, the market is prospective to witness a 5.5% CAGR. 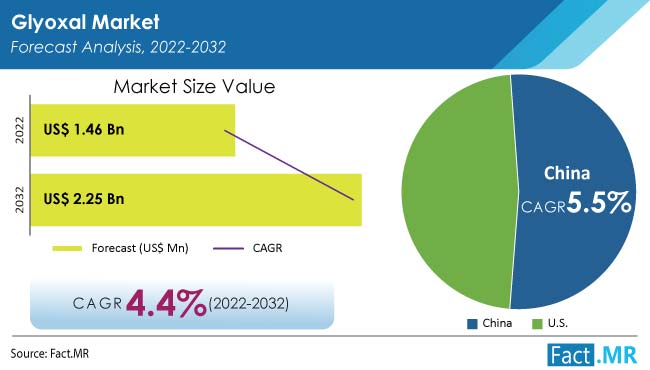 How Oil & Gas Sector Boosts the Demand for Glyoxal Market?

Oil & gas is the major application sector and accounted for 30.4% of the overall volume in 2021, registering a 4.3% CAGR. Glyoxal is widely used as a cross-linker for oil recovery, and sulfur scavenger in gas sweetening processes. The oil and gas industry is realigning after witnessing the last few years of weak prices.

With increased production efficiency, U.S. oil production has increased and is likely to observe an upward growth trend in the future. The scenario is similar in developing economies as well, thereby driving the demand for enhanced oil recovery owing to increased oil wells development.

By Application, which Glyoxal is expected to Dominate?

As a product of choice for several applications, glyoxal finds extensive application in the textile industry. In textile manufacturing, the efficient crosslinking property of glyoxal leads to decreased water uptake during cellulose crosslinking. As glyoxal can efficiently bind to cellulose and avoid cellulosic swelling, its utilization in the textile industry continues to grow.

Based on End-Use, Which Segment is Likely to Generate Highest Revenue Share

Glyoxal Demand as a Crosslinking Agent Continues to Grow

Glyoxal provides a comprehensive cross-linking solution for a wide range of polymers such as starch, polyacrylamide, cellulose, proteinaceous material, and polyvinyl alcohols. As manufacturers continue to invest more in R&D for the development of biodegradable glyoxal, its application as a crosslinking is likely to grow in the future.

Owing to its low moisture retention characteristics, the application of glyoxal as a crosslinking agent is highly popular across end-use industries such as textiles, paper & pulp, oil & gas, leather, cosmetics, and wood hardening. To deliver application-specific solutions, manufacturers closely work with the industry to align with the specific requirements.

As a crosslinking agent, glyoxal provides comprehensive solutions for a huge number of chemical applications and hence is expected to witness significant demand for glyoxal in the coming years.

Prominent Glyoxal providers are reliant on partnerships, collaborations, acquisitions, and new software launches to stay afloat in the global market. Constant innovations to ensure a seamless client-customer relationship are the main focus of prominent market players.

What was the market worth for Glyoxal in 2021?

As of 2021, Fact.MR estimated the Glyoxal market to have reached US$ 1.4 Billion

What is the expected worth of the Glyoxal industry in 2022?

At what value will the market for Glyoxal close in 2032?

What is the expected market value for the U.S Glyoxal market?

How opportunistic is the Chinese market for Glyoxal?

China is expected to register a 5.5% CAGR in the Glyoxal industry

What are the expected growth rates for the South Korean and Japanese markets?

South Korea and Japan are expected to document CAGRs worth 4.3% and 4.4% respectively in the glyoxal market

Which end-use type will account for the maximum Glyoxal revenue?

Usage of Glyoxal in textile will be maximum, expanding at a 5% CAGR

By application, which category is likely to remain top-selling until 2032?

Glyoxal application as cross-linking polymer will remain most preferred, expanding at a CAGR of 5% until 2032

Bismaleimide Market is expected to witness steady growth through 2018-2028. The Aerospace and defens...