Rising prevalence of antibiotic resistance across the globe is resulting in increasing demand for effective alternatives.

According to CDC, in Europe, around 33 000 people die every year from antibiotic-resistant bacterial infections. Rising prevalence of antibiotic resistance is expected to create significant demand for bacteriophages across the globe.

Fact.MR, in its latest research report, tracks the global sales of bacteriophages in 20+ high-growth markets, with Europe and North America the largest regional markets. Phage probiotics are highly sought-after, with maximum demand coming from patients across the world, where sales are the most through retail and hospital pharmacies.

Comprehensive assessment of some of the major challenges and unique growth factors have been analyzed in detail in the report, while bacteriophage has also been discussed in detail. The report also details the impact of COVID-19 on the growth of the bacteriophage market.

In 2019, the global bacteriophage market was valued at around US$ 39 Mn, and has been expanding at a CAGR of a little over 3% over the past 5 years. Increasing application in gastroenterology was amongst the key factors driving growth.

With increase in inpatient care, there has been a rise in the adoption of bacteriophage in phage research centers, along with bacteriophage supplements. Owing to these key factors, demand for bacteriophage is likely to grow, with the market projected to expand at a CAGR of over 4% throughout the forecast period of 2020-2030.

Innovative techniques and products are constantly being developed for antibiotic resistance treatment to increase patient safety, which is an important factor driving market growth.

Most biopharmaceutical companies are focusing on phage-based therapeutics. 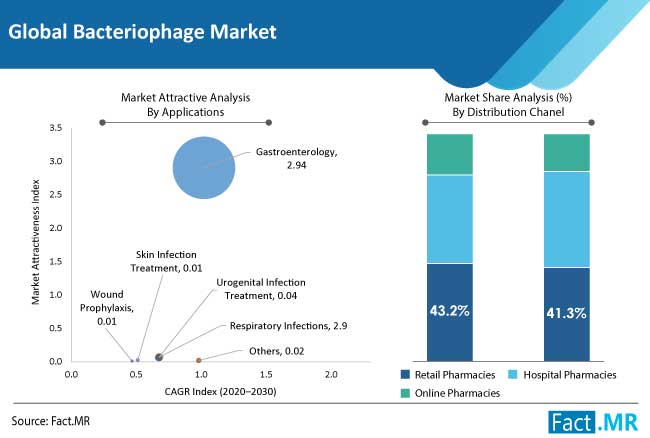 Why are Online Pharmacies Gaining Steady Traction in this Space?

Emergence of e-Commerce is boosting the share of online pharmacies. Most biotech companies are focusing on setting up online stores of bacteriophage preparations to make phages and phage therapy available across the world.

What are the Key Challenges for Bacteriophage Stakeholders?

With lack of safety and efficacy data of phage preparations and emergence of antibiotics, commercial production of therapeutic phages has been affected in most Western countries.

Bacteriophages are still not used widely. This therapy needs more research to find out how well it works. Direct toxicity related to the use of phage therapy is not known.

Additionally, it’s unknown whether phage therapy triggers bacteria to become phage resistance or not. These factors however create opportunities for manufacturers to invest in developing novel phage therapies with sufficient clinical data.

What is the Regulatory Impact on Global Sales of Bacteriophages?

Currently, there is no precise regulation for bacteriophages therapy. Since 2011, phages have been reflected as a drug in the United States or a medicinal product in the European Union. According to the European Medicines Agency (EMA), phages are defined as a substance or combination of substances that is intended to treat, diagnose, or prevent a disease, or to restore, correct, or modify physiological functions by utilizing an immunological, pharmacological, or metabolic action.

In the case of France, phages must be prepared technologically by pharmaceutical companies according to GMPs. GMPs are part of the quality assurance system put in place by the pharmaceutical industry to ensure the production of medicines in a systematic, standardized, and controlled manner, according to quality standards appropriate to their use, and in compliance with the granting of marketing authorization by national regulatory authorities. In France, marketing authorization is delivered by the French National ANSM after evaluating the dossier submitted by the pharmaceutical industry. It must include the results of clinical trials demonstrating efficacy and elements regarding the benefit/risk ratio. Currently, there is no marketing authorization for phages in France, the European Union, or the U.S.

In the United States, patients can be treated by phages following the emergency investigational new drug (eIND) pathway of the FDA (expanded access program).

In France, ANSM has been chosen for compassionate uses in the form of a Temporary Use Authorization, which normally applies to products under evaluation or about to obtain marketing authorization.

What is the Potential of Bacteriophage Probiotics?

The human gastrointestinal (Gl) tract is colonized by generous and multiple microbiotas. Several factors such as diet, antibiotic treatment, etc., may alter the useful bacterial flora of the gut, which can cause several chronic and degenerative diseases in children and the elder population. Thus, phage probiotics are developed to improve gastrointestinal health.

Extension of existing phage technology to phage probiotics to improve gut health as well as to treat infections is an emerging trend in the bacteriophage market space. This gives early-to-market entry and reduces R&D investments by excluding a few clinical investigations. 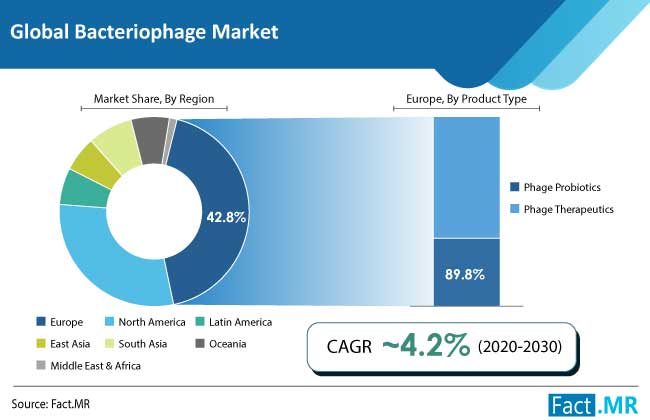 Why is Demand for Bacteriophage High in Georgia?

Bacteriophages have developed significantly in ex-Soviet countries, especially Georgia, where it is widely practiced, as well as in other parts of Europe such as Poland and Russia.

Growing failure of antibiotic treatment to fight against infections such as multi-drug resistant Staphylococcus aureus has renewed interest in bacteriophage therapy in Georgia.

There is presence of several institutions in the country proactively involved in production and therapeutic phage research, with various activities initiated at the Eliava Institute of Bacteriophage, Microbiology, and Virology (EIBMV) of the Georgian Academy of Sciences, Tbilisi, Georgia.

These institutes, in collaboration with pharmaceutical companies and government centers, are continuously involved in phage therapy research, which has thus created huge opportunities for bacteriophages in Georgia.

Eliava Institute has an extraordinary collection of bacteriophages, which can be used for the development of custom phage preparations.

Bacteriophages continued to be used therapeutically along with or without antibiotics in Eastern Europe and the former Soviet Union, and are expected to drive market growth ahead.

Increase in research & development activities, as well as government support for the development of phage therapeutics, and the presence of key player such as Biochimpharm in Georgia, is aiding market growth in the country and region as well.

Will Demand for Bacteriophage Increase in the U.S.?

The U.S. bacteriophage market is expanding due to rising prevalence of antibiotic resistance and increasing demand for an alternative to antibiotics in the country.

According to CDC, in 2019, more than 2.8 million people were diagnosed with antibiotic-resistant bacterial infections, and among them, more than 35,000 people died. However, lack of regulatory approval by USFDA for therapeutic bacteriophages is somewhat hampering market expansion in the U.S.

Increasing demand for a probiotic supplement to improve gut health using phage probiotics is another key factor aiding market progress in the U.S. Furthermore, key manufacturers in the country are keen on expanding the market footprint of their key products as well as solutions. For this, many leading manufacturers nowadays also provide advanced solutions based on bacteriophage supplements.

Why is Innovation Key for Providers of Bacteriophage to Succeed in Russia?

Extensive research & development activities are performed in Russia for the development of novel phage therapies. A growing network of phage biotech companies such as MicroGen and MicroWorld, in Russia, is supplementing the expansion of the market in the country.

Most players are focusing on the development and commercialization of bacteriophage formulations. This trend is centered on patient convenience and to increase sales revenue of the product.

Currently, available antibiotic therapies have limitations in terms of resistance by pathogens and recurrence of infections. Lack of regulatory approvals have led physicians as well as patients to go for compassionate therapy.

Phage preparations approved for clinical application have been produced in the Russian Federation, Republic of Georgia, and Poland, and a large number of studies on phage therapy have been reported in these countries. Bacteriophage preparations are registered medicines in Russia.

As such, the Russian bacteriophage industry is projected to experience huge growth during the forecast period of 2020 to 2030.

Why Does the Phage Probiotics Market Have a Higher Share in this Industry?

Phage Probiotics are a combination of bacteriophages, which attack a very specific type of bacteria. These products are used to get rid of opportunistic bacteria that occupy space in the gut, which may or may not be causing harm. Different supplements have proprietary formulations designed to heal and benefit the gut and immune system.

These phages, however, are not used for the treatment of any disease, but are simply used just as dietary supplements for gut health. Phage probiotics do not require regulatory approval like phage therapeutics do, and thus, key manufacturers are focusing more on the development of phage probiotic supplements to increase their market share.

How Big is the Opportunity in Gastroenterology for Bacteriophage Probiotic Manufacturers?

Gut health is becoming a prime health issue, and phage supplements solve the unmet needs of protecting the gut from unwanted bacteria. Thus, the gastroenterology segment is expected to drive demand for bacteriophage over the coming years.

Most bacteriophage products are used as supplements to improve gut health. Bacteriophages are still not approved by USFDA as a treatment option for various antibiotic-resistant infections in many regions.

As such, currently, only phage probiotics are used by various professionals to improve and treat gut health problems.

Companies operating in the bacteriophage therapy market are concentrating on meeting the needs of health professionals and the patient population by developing novel phase therapies. Several players are also investing in developing advanced bacteriophage platforms.

Emerging countries will provide profitable opportunities for bacteriophage, as there is an increase in the number of patients and increasing government initiatives in the healthcare sector. Moreover, increasing acquisitions and partnership agreements by players are expected to propel market growth over the forecast period.

How will the bacteriophage market expand until 2030?

Fact.MR projects the global market to register a CAGR of over 4% across the 2020-2030 assessment period. High prevalence of antibiotic resistance and rising demand for an alternative to antibiotics are anticipated to drive growth in a positive direction

Which is the largest market for bacteriophages?

As per Fact.MR’s projections, Russia is expected to pivot expansion due to technological advancements and the presence of major players offering phage therapeutics in the country

How are product approvals & launches impacting the bacteriophage space?

Leading players are introducing innovative products to retain and increase their market share. Currently, they are consistently making changes in their product category and technologies to quicken approvals by regulatory bodies

Who are the leading players providing bacteriophages?

The global immunoglobulins market shall expand strongly at a CAGR of 7.0% during the forecast period...