Market value is projected to reach US$ 2.35 Bn 2032-end with consumption of barytes increasing at a CAGR of around 3.7%. Barite sales accounted for approximately 0.5% share of the global mineral market in 2021, and due to its increasing application across various sectors, this market share is predicted to increase to 0.7% - 1% by 2032.

According to the research conducted by Fact.MR, approximately 69.1% of the world’s baryte is used in drilling mud. Barytes' chemical and different physical properties help prevent blowouts during the oil extraction process, which has increased its usage in the oil & gas drilling industry.

Latest market analysis by Fact.MR, a global market research and competitive intelligence provider, states that the market value for barytes powder over the past half-decade increased at 2.7% CAGR. Barite consumption in oil & gas drilling accounts for the highest market share, which is mainly attributed to the fine properties of baryte in comparison to other minerals.

Baryte, which is rich in several properties, is gaining popularity to cater to a wide range of applications across industries. Barite is a different form of mineral, which is a combination of barium and sulphate, and is one of the most easily available and economical minerals across the world. The composition of this mineral is 58.8% barium and 41.2% sulphate, with a specific gravity of 4.5, making it light in weight. 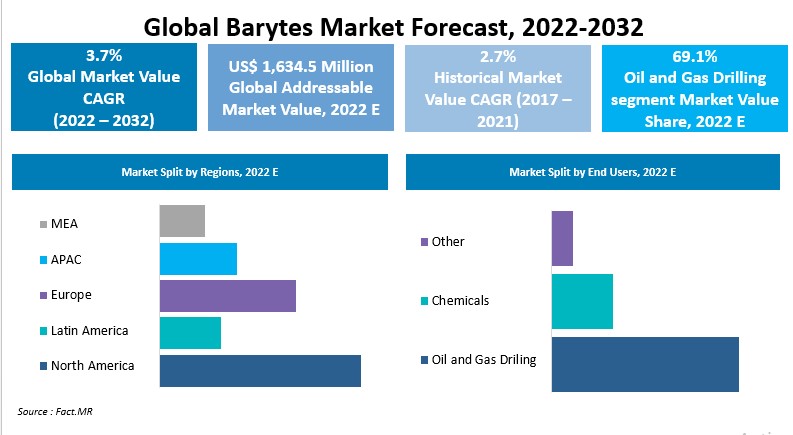 What are the Demand Drivers for Barytes Over the Forecast Period?

Baryte is one of the finest and most economical minerals available worldwide, having a plethora of benefits across many industries such as oil & gas drilling, chemicals, plastics, etc.

Extraction of oil is carried out in major countries of MEA, and baryte is the mineral that is used while drilling as it helps avoid blow-ups during the drilling process. Baryte acts as a fine weighing agent increasing the density of drilling fluids; it confines the high pressure that is created due to oil, gas, and water that is liberated while drilling.

“Potential Use of Baryte in Healthcare Sector”

When barite comes in contact with iodine, it creates certain reactions that can help obstruct radiation in diagnostic trials and tests. This creates a gateway for baryte manufacturers to enter the medical sector and explore further opportunities.

“High Grade of Purity of Barytes Leading to Several Applications”

Barytes also has non-drilling applications; the fine particles of these minerals can be used as fillers in industrial and marine paints due to their physical properties and high grade of purity. It can also be used in the plastic industry and in brake lining materials.

Why Does the U.S. Account for High Consumption of Barytes in North America?

Majority of barite deposits are found in Georgia, Nevada, and Missouri. As the U.S. stands as one of the market leaders in oil & gas drilling, the use of this material is also high.

The O&G industry uses bulk of the baryte mined as a weighing component in the formulation of drilling mud. Baryte raises the drilling mud's hydrostatic force, permitting it to balance for high-pressure zones undergone while drilling. Barytes' softness also shields it from damaging drilling tools and permits it to act as a lubricant while drilling.

In the North American region, particularly in the U.S., Y-o-Y growth in 2022-2023 is anticipated to be 3.3% in comparison with the 1.8% in previous years. Another reason for this expected growth is the medical sector where this mineral has huge potential to obstruct harmful radiations emitted during diagnosis.

Also, further applications are seen in the gastrointestinal tract; the density of the mineral prevents X-rays from penetrating through the tract and are obstructed due to the density of barite, with the tract being clearly visible in the reports.

Can the Middle East Be a High Potential Market Manufacturers of Barytes?

Middle Eastern crude oil production increased by 26.55 million barrels per day in the first quarter of 2021, indicating an increased need for baryte.

In 2021, global oil demand was approximately 96.5 million barrels per day. This is projected to boost production from Middle Eastern countries' oil and gas industries, resulting in an increase in baryte consumption in the region.

Attributed to these discussed factors, barytes market value in Saudi Arabia is projected to stand at US$ 12.6 Mn by the end of 2032, with a market share of 18.3% in the MEA region.

Which Sector Will Account for a Vital Chunk of Baryte Consumption?

The O&G industry accounts for roughly 69.1% of global demand for barytes.

Baryte is insoluble in water, non-corrosive, inert, non-abrasive, and has high specific gravity, which allows it to be used as a weighting agent in drilling operations to remove cutting from bits, transport cutting to the surface to reduce friction in the drilling string, provide lubrication, control pressure, and prevent blow-outs. The O&G industry's future expansion implies that petroleum exploration will continue to expand, as will baryte consumption.

Tier-1 players are looking to create future revenue generating opportunities in target markets. Tier-2 manufacturers have been reducing their margins in order to target price-sensitive and growing markets in Asia.

Fact.MR has provided detailed information about the overall strategies adopted by manufacturers of barytes along with their detailed overviews, including SWOT analysis and revenue generated from targeted baryte suppliers positioned across geographies, in addition to providing sales growth information, production capacity, and speculative production expansion, in the recently published report.

What is the size of the global barytes market?

Currently, the global barytes market is pegged at US$ 1.63 Bn.

At what CAGR is the barytes market expected to progress?

Baryte consumption is anticipated to increase at a CAGR of around 3.7% over the period of 2022-2032.

Which are the major companies in the barytes market?

What outlook does the U.S. market provide for baryte manufacturers?

Surimi Market is expected to grow at a CAGR of 6.1% with demand for processed surimi to rise at a CA...

Tetrapotassium pyrophosphate Market is dominating in detergent builder in industrial and institution...