Legalization of cannabis in many countries and changes in regional policies are key to the growth of the market. Additionally, consumerism, supply chain, and other factors regarding cannabis vaporizers have been discussed in the recently published report by Fact.MR. Insights have been streamlined in the report in the form of a timeline, where the report is drafted in historical (2016-2020) and forecast terms (2021-2031).

Since many countries are still struggling with the rise in COVID cases, pubs and bars remain shut in many regions. However, rapid increase in the usage of portable cannabis vaporizers and changes in regional policies is set to foster growth in the coming years.

Forecast period assessment could be done by breaking down the period into three assessable periods i.e., Short-run, medium-run and long-run

Short-Run: COVID-19 has affected the overall recreational industry, and the demand for cannabis vaporizers is set to recover by Q4 of FY2021.

Medium-Run: Increase in usage of portable vaporizers and normalized spending in recreational activities will have a positive effect on the cannabis vaporizers demand.

Long-Run: Economic cycles, inflation rate, technological changes and regional policies for cannabis vaporizers are set to impact the overall market, which has been discussed in detail in the recently published report by Fact.MR. 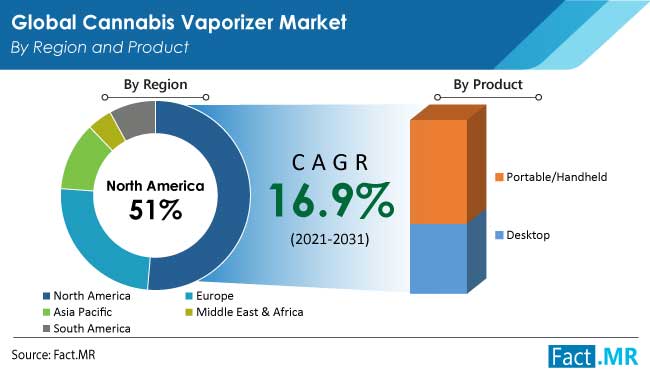 Why is the United States an Attractive Market for Cannabis Vaporizer?

The United States is an emerging market for cannabis vaporizers due to the strong positive network externalities of the regional consumers. Apart from consumerism, regional policies have a strong effect on this market.

What Makes Canada a Lucrative Market for Cannabis Vaporizer?

Canada also has a significant role in driving demand for cannabis vaporizers. Since the legalization of cannabis usage in Canada for both recreational and medicinal purposes, the market has seen a boom in the country. The USA and Canada combined now hold a major share in the global market in terms of revenue, making the North America region hold 49.2% of the market as of 2020.

Why are Sales of Cannabis Vaporizers Increasing across the U.K.?

Why are Portable Cannabis Vaporizers Preferred Over Table Top Versions? 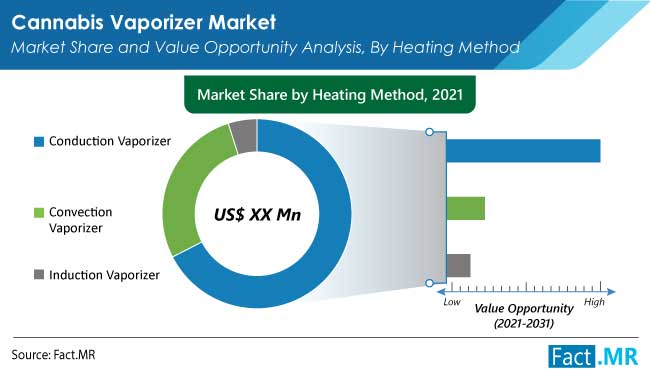 On the other hand, induction vaporizers are seeing modest growth even though the segment has the least market share in terms of revenue.

What are the Key Barriers for Cannabis Vaporizer Manufacturers?

Cannabis and cannabis extract consumption is still illegal in most countries. Moreover, several countries only legalize the use of cannabis vaporizers for medicinal purposes, which is impacting overall demand.

In addition to the above factors, strict lockdown rules in several countries have limited recreational activities, impacting the demand for cannabis vaporizers.

Cannabis vaporizers, being expensive, and traditional smoking methods still being prevalent in the market, will also act as a barriers to market expansion.

The global market is projected to generate US$ 21 Bn, expanding at a CAGR of close to 17% by 2031. However, market growth will strictly depend on regional policies across regions.

North America currently contributes the maximum share to the overall market. The market share of the North American region in 2020 was 49.2%, owing to new advancements in technologies and legalizing of cannabis in several U.S. states.

De-criminalization of cannabis consumption by many countries for recreational purposes is a major factor that will drive demand for cannabis vaporizers. Moreover, new advancements in portable cannabis vaporizers such as temperature control and battery<

Europe is projected as an emerging and lucrative market for the forecast period of 2021-2031. In most European countries, consumption of cannabis for medicinal purposes is considered legal, which is projected to drive market growth across Europe.

Manufacturers are investing in innovations such as temperature control, battery levels check using an application, consumption check, etc. Additionally, online mode has become a prominent channel for distribution and accounts for 55% of the total marke

*123 figures and 82 tables includes by FactMR