Chlorpropham or CIPC is an herbicide and a plant growth regulator. CIPC is used as a sprout or offshoot suppressant. Further, chlorpropham in tobacco functions as sucker control and is also utilized to hinder potato sprouting, especially during storage. It is available in both liquid formulations and emulsifiable concentrate.

Historic and Future Pathway Analysis for the Chlorpropham Market

Growing agricultural activities across the globe, especially in India and China, spur the market's growth outlook as there are minimal guidelines over the use of herbicides or chemicals, and also farmers utilize chemicals or herbicides to enhance production and gain high-profit margins. Further, India and China are lucrative markets for potato consumption and production. Hence, in order to prevent the potato from sprouting during storage, the use of chlorpropham is anticipated to increase.

Chlorpropham has approval only for potatoes in the United States for use as an herbicide and plant regulator.

Over the 2018-2022 historical period, the global chlorpropham market registered a CAGR of 3.3%, according to the Fact.MR, a market research and competitive intelligence provider, the market is projected to exhibit growth at 4.1% CAGR between 2023 and 2033. 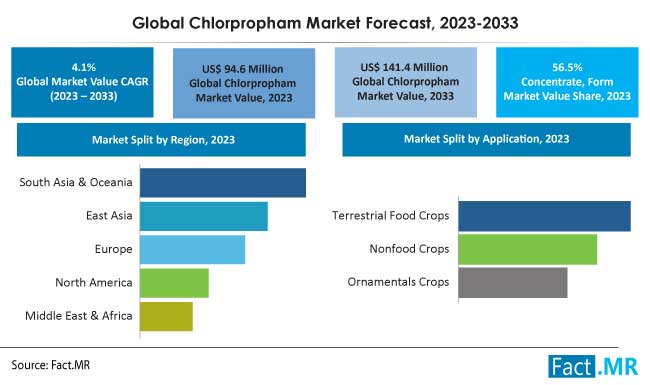 Market share analysis of chlorpropham based on application and region is provided in a nutshell in the above image. Under the application segment, the terrestrial food crops sub-segment dominates with a 56.5% market share in 2023.

The growing agrochemical sector creates a plethora of opportunities for the chlorpropham market to grow.

The aforementioned factors drive the agrochemical market growth, hence, chlorpropham is anticipated to witness growth on the back of the mushrooming agrochemical industry.

Further, owing to the use of synthetic chemicals in plants and animals, such as pesticides, herbicides, and antibiotics, enter the food chain and cause a negative impact on health. On the back of this, the demand for organic food is prevailing, which, in turn, hamper the growth of the chlorpropham market.

Chlorpropham is banned due to its negative health impact in numerous European nations and also approved only to use on potatoes to prevent sprouting during the storage period.

How Potato Products Boost the Demand for Chlorpropham in the US?

In the US, the consumption and production of potatoes are high. Among the world's top producers of potatoes, the United States comes in fifth place.

Why is the China Chlorpropham Market Expected to Be Highly Lucrative?

China is a nation with abundant agricultural resources and a sizable rural population, in addition to a long history of farming and practice of intensive cultivation, which makes China is leading country in agriculture and creates lucrative opportunities for the sales growth of Chlorpropham.

Further, the advancement of agriculture has always been a top priority for the Chinese government. Since 1978, China has implemented a policy of gradual reform and opening up, hastening the development and reform of agriculture.

The government has adhered to a policy of giving priority to work in agriculture, rural areas, and farmers, especially in recent years. With less than 10% of the world's arable land, China has managed to feed one-fifth of the world's population and produce one-fourth of the world's grain, which is a significant accomplishment in the quest for food and nutrition security not only in China but also globally.

Hence, with the flourishing agricultural sector China also witnesses weed issues, and in order to overcome that use of Chlorpropham is increasing. Additionally, the presence of major market players in China offers immense growth opportunities to the market.

Which Form of Chlorpropham dominates the market?

Will Market Growth Be Led by the Terrestrial Food Crops?

Manufacturers are adopting various ground-breaking strategies to have a huge network of loyal customers enabling them to gain high-profit margins. Further, the long-term trade relationship with the supplier and distributors enables market players to survive in an unfavorable trade situation.

Fact.MR has provided detailed information about the price points of key manufacturers of chlorpropham positioned across regions, sales growth, production capacity, and speculative technological expansion, in the recently published report.

*73 figures and 84 tables includes by FactMR