“Increasing Need for Diagnostic Imaging Treatments across the World”

According to Fact.MR, a market research and competitive intelligence provider, the global contrast media market is expected to rise at a CAGR of 3.4% from 2022 to 2026.

Demand for diagnostic imaging treatments and rising prevalence of chronic diseases are driving the market growth. Contrast agents aid in the accurate acquisition of difficult-to-image anatomical regions and the advanced viewing of biological processes. They assist in removing radiologist perception errors, which tend to affect the interpretation of the actual structure of the underlying anatomy.

The malignancy or benignity of cancer can be determined using image-guided techniques. It is essential to offer patients techniques that can aid in them receiving a diagnosis at an earlier stage due to the rising prevalence and the rise in the number of cancer cases across both, emerging and established economies of the world. 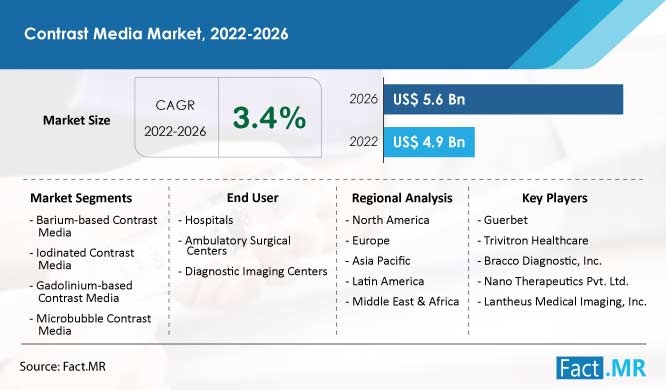 Image-guided procedures (IGS) are becoming more popular over time. A thorough understanding of the imaging process and its therapeutic applications, as well as new methods of data gathering, processing, and display, are all necessary to meet the growing need for improved imaging during surgeries.

This need is extremely well met by image-guided treatments, which has led to an increase in demand for these operations for diagnostic and therapeutic purposes and, as a result, has contributed to contrast agents market expansion.

Contrast agents alter how the body's imaging devices interact with it temporarily rather than being dyes that permanently stain inside organs. By making blood vessels and tissues more visible, these contrast materials aid in the differentiation of particular bodily regions from the surrounding tissues.

The increased adoption of advanced imaging modalities in hospitals, diagnostic facilities, and outpatient care facilities, as well as the expansion of hospitals and diagnostic facilities globally, are all contributing contributors to the global market's revenue growth. Additionally, many market participants are concentrating on creating enhanced contrast media at reasonable costs. Going forward, this is anticipated to boost market expansion.

Contrast media producers have made significant R&D investments as a result of the rising demand for imaging procedures to launch new products and acquire approval for novel indications. Growing technological advancements in prenatal genetic screening would enhance the industry. The market is being driven by an increase in the need for contrast media consumables.

The market is projected to rise as a result of an increase in MRI, CT, and ultrasound exams as well as a strengthening of the healthcare system by hospitals and diagnostic facilities. Local production of APIs in developing countries reduces the overall cost of making contrast agents.

Which Factors are Preventing the Market from Reaching its Full Potential?

Issues such as the high cost of some modern imaging equipment and contrast media injectors as well as the lack of qualified personnel to operate these modalities are anticipated to restrain the market growth over the coming years. The market expansion may be constrained by some adverse effects and allergic responses related to their use.

How are New Entrants Contributing to Market Growth?

New companies are especially concentrating on creating organ-specific products for better diagnosis. The most frequent imaging test to find breast cancer is a mammogram. Start-ups are focused on developing Grating-Interferometry Breast-Computed-Tomography (GI-BCT)-based technologies that collect detailed pictures without inflicting discomfort on patients.

Why is North America Expected to Lead the Global Market for Contrast Media?

North America accounts for the highest share in the contrast media market because of the well-established healthcare infrastructure and significant investments by major players in research efforts to create efficient contrast media agents.

The availability of healthcare facilities, the accessibility of advanced technologies, the high demand for diagnostic procedures, and a rise in disease screening programs and disease management in the region are all driving the market growth in North America.

The growth of the market in the region is being driven by an increase in inpatient examinations, notable advancements in diagnostic imaging technologies, and an increase in cancer cases and cardiac issues.

Why Should Contrast Media Suppliers Invest in the U.S.?

“Enhanced MRI Techniques for Cardiovascular Disorders in the U.S.”

The U.S. market is growing due to the key suppliers of contrast media, highly developed healthcare facilities, growing public awareness of early detection, a high rate of traffic accidents, and rising R&D expenditures.

How is the Market for Contrast Media Progressing in China?

The market in China is projected to rise at a CAGR of 4.5% over the forecast period.

Rising use of MRI procedures for treating cardiovascular diseases, the presence of highly advanced catheterization labs, the rising use of radiopaque contrast media, the increasing demand for minimally invasive procedures, and the rising prevalence of cardiac disorders are driving the market growth in China.

Increased demand for cutting-edge imaging systems, a strong emphasis on producing more advanced contrast agents, a growing older population, a rising prevalence of chronic diseases, and an increase in fractures & spinal injuries are the factors boosting the market expansion in China.

What Type of Contrast Media Will Exhibit Increasing Sales?

Which Imaging Modality of Contrast Media is Highly Demanded?

Sales of X-ray/CT contrast agents are projected to rise due to rising computerized tomography (CT) scan exams, rising use of modern CT scan equipment, and a growing emphasis on improving already existing items. A CT scan creates images of the bones, soft tissues, and blood vessels inside the body and employs X-rays and computer software to identify various diseases and ailments.

Contrast media manufacturers are concentrating on developing new products and using a variety of tactics, including partnerships, license agreements, and alliances to make a mark in the industry.

How big is the market for contrast media?

The global contrast media market is currently valued at US$ 4.9 billion.

What is the predicted growth rate for the contrast media market?

The market for contrast media is anticipated to rise at 3.4% CAGR through 2026.

Who are the top contrast media providers?

What valuation is the contrast media market expected to reach by 2026?

Which are the top 3 countries in the contrast media market?

The U.S., China, and Germany lead the market for contrast media.

Iodinated contrast media accounts for 60% share of the global market.

Diagnostic Imaging Services Market is expected to reach a valuation of US$ 1 Billion, growing at a C...