The market for electronic treadles is likely to grow because they are widely used in railway signaling systems that detect when a train wheel has passed a particular location. The use of electronic treadles is to detect the presence of a train traveling and the direction at a given point on the track and control the function of the train.

An electronic treadle is an electrical device that is used in railway signaling to detect the location, direction, and presence of a train. The treadle is primarily used to control automatic railroad crossings and uses both, a strike-in feature to start the railroad crossing sequence and a strike-out feature to end the sequence.

According to Fact.MR, a market research and competitive intelligence provider, the worldwide electronic treadles market is predicted to evolve at a CAGR of 7.4% between 2022 and 2032 as compared to the CAGR of 1.4% registered between 2017 and 2021. 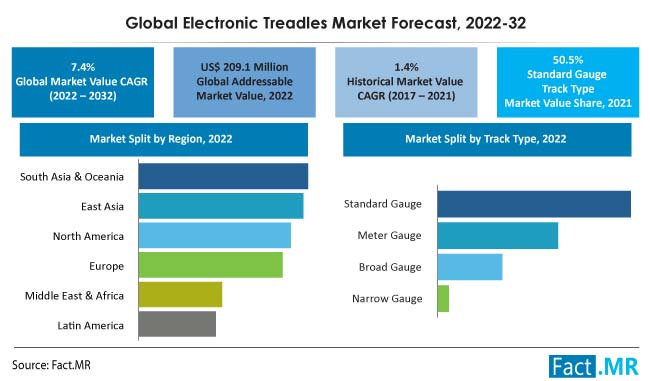 Electronic treadles are used extensively in rail line construction to detect the location, presence, and direction of trains. Furthermore, the availability of electronic treadles used in railway signaling will drive market growth substantially over the coming years.

Several economies across the world are focusing on developing new infrastructure or upgrading existing infrastructure. Rail transportation is undergoing a tidal wave of digital transformation with far-reaching consequences.

Traditional rail transportation performance requirements will continue to be measured; however, each will benefit from the use of digital technologies.

Electronic treadles have now become more efficient with developments in design and the implementation of technology. In addition to this, advanced electronic treadles work provide excellent detection and efficiency and are also useful for rail track maintenance in crowded places.

Freight railways are privately-owned companies that are responsible for their upkeep and modifications. Rail transit is much more efficient for moving products than road, air, or even sea transport, which may explain its high appeal.

Rising earnings also drive freight rail demand, because higher incomes have increased demand for the faster delivery of high-value, lighter commodities. Consumers are increasingly drawn to less expensive alternatives for goods transportation, which is expected to expand the freight rail sector, and, in parallel, drive the sales of electronic treadles.

The United States electronic treadles market accounts for the largest market share of 75% in North America and is set to register 5% CAGR during the forecast years.

The Brazil electronic treadles market holds 24% market share in Latin America and is projected to expand at 7.3% CAGR over the decade.

Rapid rise in rail line construction and infrastructural activities is boosting the use of electronic treadles in these regions. In addition, electronic treads are widely used in rail systems to detect wheel failures and prevent serious accidents and tragedies, thereby supporting market demand and growth in these regions for the future.

How are the East Asia and South Asia & Oceania Markets Evolving?

In these regions, the India and China electronic treadles markets are expected to expand rapidly at 10% and 8.8% CAGRs, respectively, over the forecast years of 2022-2032.

Rail infrastructural activities in the Asia Pacific region are rising fast, especially in emerging economies such as India and China who are building huge rail networks with reduced carbon emissions, drastically shortened travel times, and improved safety, thereby allowing more people to travel across their massive cities at a low price.

The electronic treadles market, under direction, is segmented into uni-direction and bi-direction. Uni-directional treadles account for 14.8% of the global market share and the segment is projected to expand at 4.9% CAGR over the assessment period.

The market for bi-direction treadles is likely to gain traction owing to these offering better performance. Manufacturers are focusing on improving the efficiency of sensors to drive the overall sales of electronic treadles.

Bi-direction treadles hold 85.2% market share and their demand is slated to surge at 7.9% CAGR over the decade.

In Which Track Gauge are Electronic Treadles Most Widely Used?

Amongst them, standard gauge leads the market with 50.2% share, and the segment is poised to expand at 7.4% CAGR through 2032.

The global electronic treadles market is highly competitive and fragmented with the presence of several regional and global manufacturers. New product launches, redevelopments, mergers & acquisitions, partnerships, and collaborations are being adopted by key players in the market.

Along with this, new product development is also adopted as a strategic approach by companies to expand their presence in the market.

What is the global electronic treadles market valuation?

The global electronic treadles market stands at US$ 209.1 million in 2022.

How is demand for electronic treadles expected to shape up?

Worldwide demand for electronic treadles is anticipated to reach US$ 428.3 million by 2032-end.

How did the market fare historically?

Between 2017 and 2021, global consumption of electronic treadles increased at 1.4% CAGR.

Who are the prominent manufacturers of electronic treadles?

Which region is highly lucrative for electronic treadle suppliers?

Which directional type contributes the highest share to overall sales?