Expanding at a healthy 5.8% CAGR, the global homosalate market is expected to increase from a current market valuation of US$ 116.9 million to US$ 206 million by the end of 2032.

Worldwide consumption of homosalate in skincare products is anticipated to increase at 5.4% CAGR to reach a volume of 3.6 kilotons by 2032-end. Furthermore, homosalate sales across the world accounted for 2.6% share of the global cosmetic ingredients market in terms of volume.

As per the latest business analysis by Fact.MR, a research & competitive acumen provider, demand for homosalate over the recent past increased at a CAGR of around 0.2% in terms of volume. Additionally, at the end of 2021, the homosalate market stood at around 2.1 kilotons.

Homosalate usage as a solubilizer is expected to continue dominating the market in the mid-term, which is mainly attributed to its characteristic of acting as a chemical agent in cosmetic formulations and ensuring that other hard-to-dissolve cosmetic ingredients such as avobenzone get dissolved easily.

Furthermore, due to increased homosalate consumption in sunscreen manufacturing, the market has grown at a rapid rate over the past half-decade. As a result, sunscreen application accounts for a significant market share owing to homosalate's widespread use as a mixing agent.

However, the SCCS body of the European Union has suggested limiting homosalate concentration to 0.5% in facial products. This is poised to act as a limiting factor to market growth, especially in European countries that are expected to implement the law very soon and limit the overall usage of homosalate to prescribed concentrations, bringing down the earlier permissible limit from 10% to 0.5%.

As a result, manufacturers have been looking at collaborating with cosmetic manufacturers and investing in the development of newer cosmetic formulations that could provide similar benefits, although being used in similar concentrations. 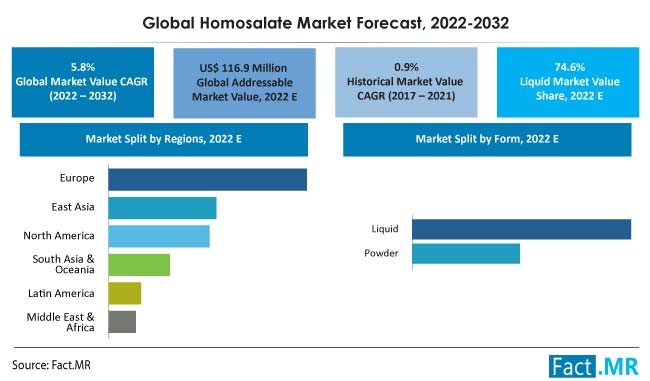 How is the Homosalate Market Expected to Evolve Over the Coming Years?

Sunburn and skin cancer are the most common reasons for using skincare cosmetics, which has increased the usage of homosalate, a solubilizer that is used in sunscreens, foundations, and moisturizers, among other things. Even though homosalate is suspected of being an endocrine disruptor in some research investigations, it has yet to be subjected to full-fledged peer evaluations to garner the attention it deserves.

Manufacturers of sun care creams with anti-aging and SPF benefits have seen significant demand from millennials and generation Z, which has expedited the expansion of the sunscreen sector, and, as a result, contributed to the inherent growth of the homosalate market.

Collaborations and R&D being done by manufacturers to reduce the concentration of homosalate in cosmetic products are further poised to create a demand for homosalate, especially from those cosmetic manufacturers that have taken it as a challenge to not only limit the amount of homosalate being used in facial products to 0.5% but also retain the benefits offered by the product’s usage in the first place.

Furthermore, homosalate cosmetic ingredient usage in hair care products has been on the rise, owing to its usage in treatment formulations and conditioners as a mixing agent.

How is the U.S. Homosalate Market Faring?

“Market Being Driven on Back of Huge Cosmetic Industry”

The United States has remained a major consumer of cosmetics manufactured around the world. Several firms are continually investing in the research and development of newer cosmetic formulations that contain newer ingredients. This has assisted in increasing demand for homosalate, and the market is expected to expand at a CAGR of 5.7% between 2022 and 2032.

As of 2020, the United States controls approximately 22% of the US$ 530 billion global beauty industry. This is because U.S. women spend US$ 1,000 to US$ 3,000 each year on cosmetic products, particularly those with anti-aging SPF protection benefits.

As a result, the United States is expected to remain a major contributor to homosalate demand over the forecast period, with an absolute dollar opportunity of roughly US$ 14.9 million.

Despite COVID lockdowns, Germany's premium cosmetics business earned over US$ 3.1 billion in sales in 2020 and saw the least decline of any European country. This was due to a shorter lockout period and the maturation of the industry's online sales channel.

Furthermore, as the country transitioned back to offline working, demand for sunscreen was at a high. This is expected to have a knock-on effect on homosalate demand, and the market is expected to expand at a CAGR of 5.6% in Germany.

France leads the European beauty business, accounting for 23% of the global market. The pillars of this excellence are quality products, continuous innovation, and a compelling framework based on French culture and heritage.

France is positioned to remain one of the most important markets for phytoceramide manufacturers as a result of new consumer trends and fast-rising rivals, expanding a CAGR of 5.3% through 2032.

Germany is expected to be the leading homosalate consumer in Europe, accounting for more than 22.1% of overall consumption in 2022. This is especially true because homosalate is being more widely utilized in sunscreen production, and a replacement has yet to be discovered.

Because of the aforementioned reasons, Europe is anticipated to be one of the dominant growth generators from 2022 to 2032, with the regional market expanding at a CAGR of 4.9% to be valued at US$ 71.1 million by 2032-end.

Which Application of Homosalate is Most Prominent in the Market?

Out of the applications considered in the scope of the study, skincare application is poised to remain the most lucrative of the lot, with sunscreen being the most targeted segment. As homosalate is used as a solubilizer, especially for hard-to-dissolve ingredients such as avobenzone, its demand keeps escalating at a rapid pace.

The sunscreen creams market is poised to cross US$ 10 billion by the end of 2024, expanding at a high single-digit CAGR. As the consumption of sunscreen keeps on escalating at a rapid pace, demand for cosmetic ingredients that provide SPF protection keeps growing, in turn, aiding homosalate market growth.

Additionally, usage of homosalate in skincare applications, namely makeup liners, lip balm, and body sprays is on the rise, owing to its usage as a UV absorber/filter. The body sprays segment is poised to create an absolute $ opportunity of US$ 13.2 million, expanding at a high 6% CAGR.

Moisturizers, which are used regularly, are the primary demand generator in the homosalate market, owing to the benefits demanded by the consumer such as SPF protection and anti-aging, where this ingredient finds its usage as a UV absorber/filter.

However, in 2021, the Scientific Committee on Consumer Safety of the European Union provided an opinion on homosalate sales, especially on its usage in facial creams. After the discussion, the committee thought that the maximum permissible limit for homosalate concentration in facial creams should be limited to 0.5%. This attracted investments in the development of newer cosmetic formulations, which could limit homosalate usage over the coming years.

Although policy-level change is poised to harm the homosalate market in the short term, manufacturers are involved in R&D for complying with the changes being suggested by SCCS and are set to come up with a workaround for the same.

Owing to the aforementioned factors, homosalate sales are expected to keep growing, but at a lower CAGR than previously anticipated, and create an absolute dollar opportunity of US$ 95 million over the decade.

Which Homosalate Use Case is Projected to Remain Vital to Market Development?

The UV absorbers/filters use case is expected to be the most important contributor to market revenue and is expected to continue dominating the market until the conclusion of the projection period, creating an absolute $ opportunity of US$ 53.6 million.

Although UV absorbers/filters are anticipated to remain the primary demand driver, homosalate usage as a mixing agent is poised to grow at a rapid rate and give stiff competition in the short-term forecast period, where the demand for sunscreen is on the rise.

Besides, sunscreen manufacturers are investing heavily in R&D and are developing customized cosmetic products in line with the changing dynamics experienced in the overall beauty industry.

Owing to the aforementioned factors, homosalate as a UV absorber is projected to touch a market valuation of US$ 96.5 million by 2032. This is followed by the solubilizer application, which is poised to create an absolute $ opportunity of US$ 53.3 million, especially due to the high demand for homosalate in the cosmetic industry.

To create a more streamlined supply chain, key participants in the cosmetics and skincare market are cooperating with homosalate manufacturers. In response to the increasing demand for skin care products, these companies are also striving for innovation and discoveries with few or no adverse effects to experience organic growth and preserve their competitive advantage, and further promote R&D in newer cosmetic formulations that comply with the changing regulations related to homosalate concentration.

Chemical-based skin care products are gaining attention due to their negative effects on the skin, producing allergies and other skin-related concerns, indicating an unstable market scenario for homosalate.

How much is the current valuation of the homosalate market?

Currently, the global homosalate market is pegged at US$ 116.9 million.

At what CAGR is the homosalate market expected to grow?

Worldwide homosalate consumption is anticipated to increase at 5.8% CAGR through 2032.

How has the homosalate market performed in the past?

How have key players reacted to developments in the market?

Key market players are involved in the R&D of newer cosmetic formulations in an attempt to comply with the 0.5% concentration limitation in facial creams.

What are the market-defining latest trends in the homosalate market?

Homosalate manufacturers have adopted a defensive approach and are continuing with their existing product portfolios, only looking for ways to adapt to regulatory-level changes.

Who are the prominent homosalate suppliers?

What outlook does the China homosalate market provide?

China is estimated to hold around 11.6% of the global homosalate market share in 2022.