The global isoprenol market accounted for a valuation of US$ 190 Million in the end of 2021.  The worldwide market is gaining traction and is expected to grow at a CAGR of 6.5%, earning US$ 375 Million in market revenue between 2022 and 2032.

As of 2022, the market is poised to reach US$ 200 Million, following a Y-o-Y growth trajectory of 5.2%. Manufacturing advancements, together with increased use in perfumes, agrochemicals, medicines, and flavors are likely to boost isoprenol providers' income in the future years.

Isoprenol is largely utilized in pharmaceuticals, aroma chemicals, agrochemicals, and polymers. It is mostly used as a building block for aromatic compounds. Because of its favorable physical and chemical qualities, isoprenol is also gaining appeal in the global market. In the agrochemicals sector, isoprenol is commonly used to make herbicides and insecticides.

Because it is an environmentally benign chemical, it is widely utilized in crop protection chemicals such as fungicides, herbicides, and insecticides. Increased crop infestations have pushed modern farmers to rely on agrochemicals that boost output while reducing crop loss. The growth of the agrochemicals sector is increasing demand for isoprenol, propelling the worldwide isoprenol market.

According to Fact.MR, isoprenol sales increased at a CAGR of 4% from 2015 to 2021. The market has grown in recent years as applications in a variety of industries, including agrochemicals and flavors and fragrances, to mention a few, have increased. Furthermore, the increasing number of R&D activities and technologies introduced by important firms boosted industry growth.

Prospects deteriorated substantially during the COVID-19 pandemic, as the disease's highly infectious nature compelled the chemical sector to cease operations. Due to personnel shortages and problems in raw material delivery, manufacturing activities were reduced to 40-60% capacity. This impact, however, rapidly disappeared as the second half of 2020 allowed for the restart of activities, recovering demand.

Isoprenol manufacturers are likely to flourish on innovative technological and chemical solutions. They are likely to acquire more income in the approaching years due to a rise in demand from key application industries. Overall, the business is expected to rise at a CAGR of 6.5% through 2032, amassing US$ 375 Million during the following 10 years. 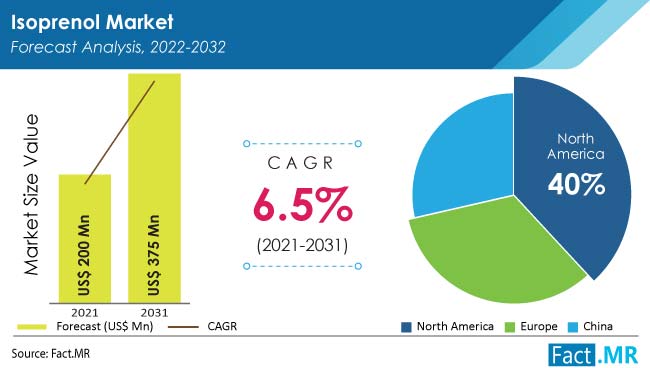 Isoprenol is widely utilized in the agrochemical industry in a variety of applications. The manufacture of crop protection chemicals, insecticides and pesticides all rely significantly on isoprenol. Manufacturers of isoprenol are projected to benefit from increased demand from this industry in the future years.

According to a SelectUSA study titled "Agribusiness Spotlight," U.S. agribusiness is a key contributor to the worldwide isoprenol sector, contributing over US$ 159 billion in sales to the U.S. economy in 2018. According to the research, Foreign Direct Investment (FDI) in the United States agricultural industry was more than US$ 14 Billion in 2018. As a result, these numbers provide a glimpse of the expanding potential for isoprenol providers worldwide.

Flavors and Perfumes to Provide Profitable Opportunities in the Isoprenol Market

The segment is expected to grow considerably in terms of volume throughout the projected period. By 2032, the category is expected to account for more than 30% of the worldwide isoprenol market. Agrochemicals are chemical compounds used in agricultural farmlands to replenish nutritional deficiencies in fields or crops. They also help crops develop by destroying hazardous insects. Agrochemicals increase the quantity and quality of agricultural goods. They are utilized in horticulture, dairy farming, cattle, grain farming, and commercial planting, among other agricultural areas.

Dangerous Effects of Raw Materials on the Isoprenol Market

Isobutene and formaldehyde are two of the most important raw materials utilized in the production of isoprenol and prenol, both of which are classed as hemiterpene alcohols. Isobutene is dangerous to both humans and the environment. When breathed in significant quantities, isobutene has a negative impact on the lungs.

Contact with liquid isobutene can induce frostbite, while contact to isobutene can cause eye, nose, and throat irritation. In addition, it produces headaches, dizziness, lightheadedness, and weariness. Higher levels of isobutene exposure can also cause coma and death.

Isobutene is a highly flammable gas that poses a serious fire risk. Price volatility, uncertainty in raw material supply, and the availability of replacement compounds are all predicted to stymie the isoprenol industry in the near term.

What is the Growth Outlook for Isoprenol in North America?

Furthermore, the surge in demand from the agrichemical and pharmaceutical industries is fueling the expansion of the country's isoprenol producers. As a result, the United States dominates isoprenol sales in North America and is anticipated to do so for the foreseeable future. As a result of the aforementioned factors, North America is estimated to account for about 40% of the isoprenol market during the assessment period.

How do Growth Prospects appear in the European Market?

According to a 2019 study issued by the European Federation of Pharmaceutical Industries and Associations (EFPIA), the pharmaceutical sector in Europe invested more than EUR 35,300 million in R&D, with Germany accounting for the majority of the contribution.

According to the research, Europe accounts for 23.2% of worldwide pharmaceutical sales, with Germany accounting for the lion's share of these sales on the continent. As a result, isoprenol makers in the nation are finding new opportunities.

Is China likely to emerge as an Opportunistic Isoprenol Industry?

According to the research, with the Chinese government boosting spending in healthcare and R&D, China provides significant prospects for breakthrough pharmaceutical goods and technology. Increased demand from the pharmaceutical and flavor and fragrance sectors is driving up sales in China.

Why is Demand for Agrochemicals Rising Rapidly?

Isoprenol is commonly used in the production of pesticides and insecticides. This is because isoprenol is environmentally benign and does not impair crop development. Furthermore, isoprenol has the potential to be used as a biofuel.

Thus, agrochemicals, together with flavors and fragrances, are the most profitable areas in terms of application, and are projected to maintain their dominance in the next years. According to Fact.MR, agrochemicals will account for roughly 40% of the isoprenol market throughout the forecast period.

The global market for isoprenol is very fragmented. In 2019, Jilin Zhongxin Chemical Group Co., Ltd. and Andeshengtec owned more than half of the worldwide isoprenol market. Prominent isoprenol and related product producers are pursuing a variety of growth strategies. These often entail the introduction of new product lines, the formation of alliances, and the modification of existing product prices. The following are some noteworthy developments:

What is the expected worth of the isoprenol industry in 2022?

By 2022, Fact.MR expected demand for Isoprenol to reach US$ 200 Million

What is the expected market value for the North American market?

What is the expected forecast CAGR for isoprenol from 2022-2032?

At what value will the market for isoprenol close in 2032?

What was the market worth for Isoprenol in 2021?

As of 2021, Fact.MR estimated the Isoprenol market to have reached US$ 190 Million

How opportunistic is the European market for isoprenol?

Europe is expected to garner a revenue share of 35% in 2022 and beyond, as per Fact.MR

What is the expected growth rate for the Chinese market?

Which application will account for the maximum isoprenol revenue?

Agrochemicals will account for roughly 40% of the isoprenol market throughout the forecast period.