As per the jet bridge industry analysis by Fact.MR, global demand enjoyed year-on-year (YoY) growth of 7.1% in 2021, and is set to total a valuation of around US$ 1.6 Bn by the end of 2031. Demand for movable passenger boarding bridges is anticipated to grow 1.9X while fixed passenger boarding bridges will offer an incremental dollar opportunity of US$ 765 Mn over the next ten years.

All along the preceding demi-decade of 2016-2020, the global Passenger boarding bridge market expanded at a CAGR of 3.5%. Changing travelling preferences and increased spending by people are dominant bellwethers for the inflation of the market.

Booming development and infrastructural advancements have foreseen a rise in the demand for jet bridges. Increased awareness and government regulations of less polluting alternatives have also increased demand for passenger boarding, ensuring the market's steady expansion.

Increasing infrastructural and government spending on elevating the living standards of people are expected to drive demand for jet bridges over the coming years.

Why is Demand for Jet Bridges Rising across the World?

Mounting demand for jet bridges is not due to tenacious demand for alternative airbuses but also due to rising acceptance among airport authorities.

Regions such as East Asia, South Asia, and Europe see high demand for jet bridges as compared to other parts of the world due to rising air traffic. On the other hand, North America, which already is an established market for jet bridges, is exhibiting sluggish growth due to well-settled infrastructure.

Howbeit, regions such as Latin America and MEA see lower utilization of jet bridges due to infrastructure that is at the lower end in these regions. Increased demand for jet bridges is due to their use in a variety of end-use industries as well as increasing standards of living and rising awareness. 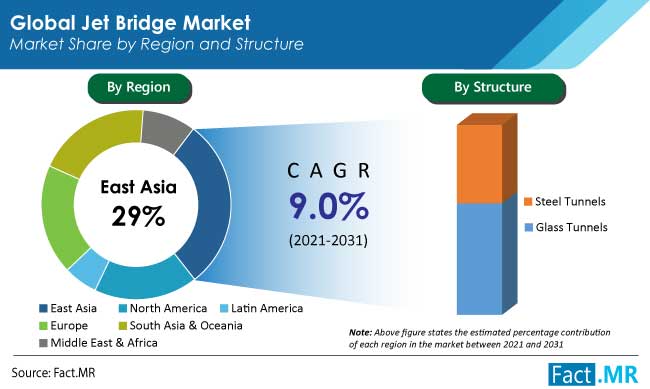 Many countries are concentrating on advanced technology in order to improve their infrastructural facilities and produce more revenue from the industry. South Asia and East Asia are leading users of jet bridges around the globe.

Jet bridges also crop up as a low carbon transmitting structure, as they utilizes renewable resources for working. Business growth has been standardized optimistically due to growing authorization of low-carbon footprint and renewable resources.

What are the Key Challenges Affecting the Sales of Jet Bridges?

Use of airport shuttle buses has had an effect on the market for jet bridges around the world. Growth of the advanced jet bridges market is being hampered by higher production costs, installation difficulty, and limited usability in small airports.

Increasing taxes and lower subsidiaries are acting as restraints for the market, which, in turn, is resulting in high pricing with frequent maintenance cost.

East Asia, mainly China, is the beetling region in terms of demand for jet bridges due to highest spending on airport and seaport infrastructure. Elevated technologies and per capita spending on improving the living standards of people have made East Asia among the leading consumers for jet bridges.

In support of the above statement, East Asia accounts for over 29% of the market share at present.

Following East Asia is South Asia, which accounts for 19.5% of the market share. India accounts for the largest value and volume in the South Asia region.

The lowest market share is accounted for by MEA, expected to be just above US$ 100 Mn by the year 2031, in which, GCC countries will hold a significant share of 33.4% and expected to rise at a CAGR of 4.7%. 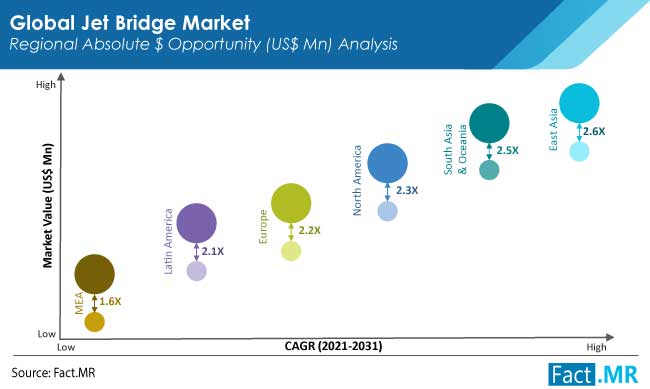 Why is China a Growth Epicenter for Jet Bridge Suppliers?

China remains the leader in the market with an absolute dollar opportunity US$ 200 Mn, having a market share of 63.9% and market value of US$ 128 Mn.

China is the most appealing market for jet bridges because of its population, abundant raw materials, and early development.

Why is India Turning Out to Be a Promising Market for Jet Bridge Providers?

In terms of demand and output, India holds the second place in the jet bridge industry due to increasing air traffic and development in the country. In the year 2020, over 341 Mn passenger traffic was recorded through airports across India, out of which, 66 Mn were international passengers.

In the year 2020, jet bridge demand grew to US$ 37 Mn, fueling the country’s economy. The market in India is expected to grow 2.3X by 2031, creating an absolute dollar opportunity of US$ 53 Mn over the next ten years.

How Has Jet Bridge Demand Been Shaping Up across Established Markets?

Why is Demand for Mobile Telescopic Bridges High?

Mobile telescopic bridges hold a market share of 25%, due to ease of use and availability. Manufactures are focusing on various modernizations for the development of eco-efficient jet bridges so that the greenhouse effect can be controlled.

Airports have the highest utilization of jet bridges, and hold the highest share of 76.3% under the end-use segment.

Rising population is increasing demand for automation, which is indirectly affecting the environment. As such, manufacturers are coming up with advanced technologies that can be used in jet bridges to reduce the emission of harmful gasses, with the use of solar panel.

How Has COVID-19 Impacted Sales of Jet Bridges?

Pandemics and natural disasters, such as COVID-19, are unpredictable and have a significant economic effect on many of the world's major economies. COVID-19 has also had an influence on demand and sales of jet bridges.

Similarly, recent developments related to companies offering jet bridges have been tracked by the team at Fact.MR, which are available in the full report.

How much is the current worth of the jet bridge market?

The global jet bridge market size is worth more than US$ 690 Mn at present.

What is the sales forecast for jet bridges?

What was the last 5 year’s market CAGR for the demand for jet bridges?

What is a key trend shaping the growth of the market for jet bridges?

Demand for glass tunnels is soaring owing to their efficiency, and this is one of the key trends being observed in the market.

What is majorly driving demand for jet bridges?

Growing demand for fast mode of transport across multitude avenues stands as the core driver for the market.

What is the market share of top 5 suppliers of jet bridges?

As per ratings on the basis of market share, market reach, clientele, etc., the top 5 manufacturers of jet bridges account for around 45% share in the market.

Which are the top 5 countries driving demand for jet bridges?

At what percentage is sales of jet bridges going to register growth in Europe?

Which countries are key producers of jet bridges?

China, Indonesia, and Russia are key producers of jet bridges.

What do statistics for South Korea and Japan reveal?

The market in South Korea and Japan is set to expand at over 9.5% CAGR, with both countries together accounting for 30% share in the East Asia market.