The global laryngeal stents market currently accounts for a valuation of US$ 53 million and is expected to reach US$ 75 million by the end of 2027. Worldwide demand for laryngeal stents is predicted to increase at a high-value CAGR of 7.1% from 2022 to 2027.

According to Fact.MR, a market research and competitive intelligence provider, worldwide sales of laryngeal stents are projected to increase rapidly at a CAGR of 7.1% from 2022 to 2027.

The market for laryngeal stents is expanding as a result of factors such as the increasing prevalence of cardiovascular diseases, increased focus on medical device research and development expertise and adoption of cutting-edge healthcare technologies, an ever-increasing geriatric population base, and rising investments in the development of healthcare infrastructure, particularly in developing economies.

The medical devices for airway management known as laryngeal stents are used to strengthen the laryngeal muscles. These stents are utilized to widen airways that have become narrowed due to lung cancer, tuberculosis, infections, lymphoma, or other inflammatory disorders.

One of the key reasons promoting the growth of the market is the increase in government initiatives to support the construction of healthcare infrastructure. Another factor influencing market expansion is the increasing accessibility of minimally-invasive procedures along with the rising frequency of numerous chronic and inflammatory disorders.

Other significant aspects that will contribute to the expansion of the arterial stents market are the rise in medical tourism, demand for endovascular stents, the desire for customized lung stents, and the rapid development of biodegradable and drug-eluting stents. 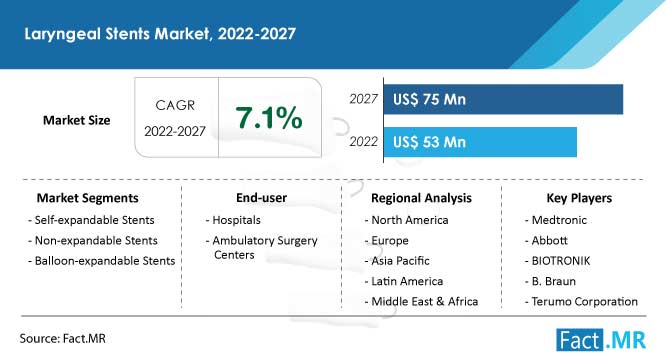 Why is the Popularity of Laryngeal Stents Rising at a Rapid Pace?

Patients undergoing minimally-invasive operations for respiratory disorders recover more quickly, experience fewer difficulties, spend less time in the hospital, and lose less blood. As a result, the demand for laryngeal stents is increasing due to the rapid adoption of bronchoscopy, a minimally-invasive, non-surgical process for placing stents.

Numerous improvements in minimally-invasive techniques are also increasing the number of people who favor them for the treatment of breathing issues.

Lung cancer is becoming more common, which has increased the use of minimally-invasive procedures to avoid suffering. Patients who have congenital cystic adenomatoid abnormalities that make breathing difficult choose to have stents placed. As a result, the use of airway stents is rapidly increasing, which is driving up the need for lung stents. In addition, placing a lung stent has a lower risk of problems and is more affordable than more traditional operations.

Demand for laryngeal stents is projected to increase over the coming years due to the increasing prevalence of these disorders attributed to a sedentary lifestyle and a polluted environment. The market is expanding even more as a result of rising R&D expenditures by both public and private entities for the creation of non-vascular stents.

With ageing, a person's immune system deteriorates. Because of this, developing various ailments is more likely as the older population grows. Chronic respiratory disorders are more common and have an increased incidence since the senior population is growing quickly. This is hence expected to fuel the need for laryngeal stenting devices over the projection period.

How Can Market Growth Be Hampered to Some Extent?

The availability of alternative therapies and the high price of the recommended treatments may slow market expansion. The market is anticipated to face difficulties due to a lack of medical specialists, particularly in developing and undeveloped countries, and growing concerns about the risks related to stents.

How Can Start-ups Establish Their Position in the Laryngeal Stents Industry?

Which Region is Expected to Lead Market Expansion Going Forward?

North America dominates the laryngeal stents market due to the existence of favorable reimbursement rules, an improved healthcare infrastructure, and rising demand for coronary stents.

The market expansion is being driven by a properly integrated network of public and commercial hospitals, high consumer knowledge of laryngeal stents, and a rise in government measures to deliver improved healthcare services.

Some of the main drivers of the market growth include the significant presence of laryngeal stent manufacturers, high awareness of respiratory diseases among surgeons, favorable government initiatives, and extensive implementation of clinical guidelines released by healthcare organizations.

How is the Market for Laryngeal Stents Evolving in the U.S.?

“Emergence of Unique & Innovative Laryngeal Stents in the U.S.”

Demand for laryngeal stents in the United States is consistently high due to the rising prevalence of respiratory illnesses. The market demand is being fueled by the existence of prominent market players working on the creation and introduction of unique and innovative laryngeal stents.

Growth of the market in the United States is being driven by modern healthcare services, the presence of several large hospitals, the rising adoption of medical devices, and the growing usage of tracheal stents.

Laryngeal stent manufacturing is increasingly being outsourced, which is expected to boost market growth in China throughout the forecast period. High R&D investments by international firms in the country also act as a growth-promoting factor.

The market is expanding in China due to factors such as the increased prevalence of lung cancer, an ageing population, the expansion of hospitals and clinics, and the availability of labor at low costs for production.

Which Type of Laryngeal Stents Will See a Rise in Sales?

In the long-term management of benign tracheobronchial stenosis, self-expandable stents are both safe and efficient. Patients with malignant airway disease can also benefit from the symptom relief provided by these stents.

Which End User is Expected to Generate High Revenue for Market Players?

The laryngeal stents market is segmented into ambulatory surgery centers and hospitals based on end user. The largest share of the global market is held by hospitals due to the increased admission of patients with chronic illnesses.

Hospitals are performing an increasing number of operations and bronchoscopies. Governments in various countries are also providing insurance and financial assistance for medical care, which is encouraging more individuals to seek treatment in hospitals for serious illnesses

Major firms have employed techniques such as mergers & acquisitions and strategic alliances to acquire a competitive edge in the market. Key companies are putting more emphasis on creating advanced products that are more accurate and effective.

What is the current market value of laryngeal stents?

The global laryngeal stents market currently accounts for a valuation of US$ 53 million.

What is the predicted growth rate for the laryngeal stents market?

What is the projected market size for laryngeal stents?

The laryngeal stents market is projected to reach US$ 75 million by 2027.

Who are the key suppliers of laryngeal stents?

Medtronic, Abbott, and BIOTRONIK are key manufacturers of laryngeal stents.

Which is the most widely used type of laryngeal stent?

The market for laryngeal stents in Germany is set to expand at 5% CAGR through 2027.

Gastrointestinal Stents Market expects a market valuation of US$ 674.3 million by 2027. Sales of gas...