Global demand for venous stent devices is valued at US$ 1.08 billion in 2022. The market for venous stents is predicted to increase rapidly at a CAGR of 8.5% during the forecast period and reach a market valuation of US$ 2.44 billion by the year 2032.

When the iliofemoral vein becomes constricted due to a buildup of fibrous blood clots along the vein's lining after a deep vein thrombosis or when the vein becomes compressed between a bone and an artery above it, Wallstent solution is used to widen the vein again (iliofemoral compression). These disorders often restrict blood circulation from the leg, causing swelling and walking pain.

Metal mesh tubes called venous stents are placed in the veins to treat chronic symptoms of venous disorders. Arterial stents and venous stents serve the same purpose. They come in a range of styles and dimensions.

Most often, a venous catheter is used to deliver stents compressed and to their intended location. Some catheters require the help of an inflated balloon, while others are self-expanded. These stents maintain the blocked or constricted veins open by expanding against them. They are flexible implants that support the vascular walls in both peripheral and central veins. Venous stent placement is typically done by surgeons in bigger, major veins such as those in the legs, belly, and chest.

Most stents are very difficult to remove if required and simply remain in place once they are implanted. Some stents can also be coated or made to release drugs gradually over time.

Key venous stent manufacturers are heavily investing in R&D to come up with advanced flexible venous stents to treat several venous diseases. The sales of venous stents are also projected to increase as a result of the increasing senior population with target disorders and the rising spending power of individuals on healthcare.

Why is There Such High Demand for Venous Stents?

According to statistics, there has been a significant increase in the patient base, which is anticipated to spur the demand for leg vein stent surgeries.

Angioplasty is a minimally-invasive procedure, whether it includes vascular stenting or not. When an artery or vein is too narrow or obstructed, angioplasty is utilised to increase blood flow. Instead of an operating room, it is typically performed in an interventional radiology room.

The main drawbacks of coated or bare metal stents have been addressed by the development of drug-eluting stents (DES).

Global cases of chronic cardiovascular diseases are rising primarily due to the increasing world’s senior population, as older people are more prone to experience heart-related disorders. Another significant problem for healthcare is hypertension. Older persons have higher amounts of total serum cholesterol, which makes them more vulnerable to several cardiovascular diseases.

Furthermore, obesity is a significant global risk factor for several heart diseases. Obesity or being overweight causes an excessive or improper buildup of fat within the artery wall, which can result in coronary heart disease and other health problems. As a result, controlling obesity and losing weight are essential steps in preventing cardiovascular disease. Thus, the above-mentioned factors are fuelling the sales of venous stents.

Which Challenges are Faced by Venous Stent Manufacturers?

Strict rules and policies for medical device approvals by respective authorities are expected to slow the production of stents.

Recent documentation of unintended negative patient outcomes has prompted the recall of several venous procedure devices from the market.

To prevent any anomaly from arising during the trials, leading medical device manufacturers rigorously scrutinize and test each product in the lab. This reduces the effective shelf life of important surgical tools, thus restricting the long-term growth potential of venous stents. 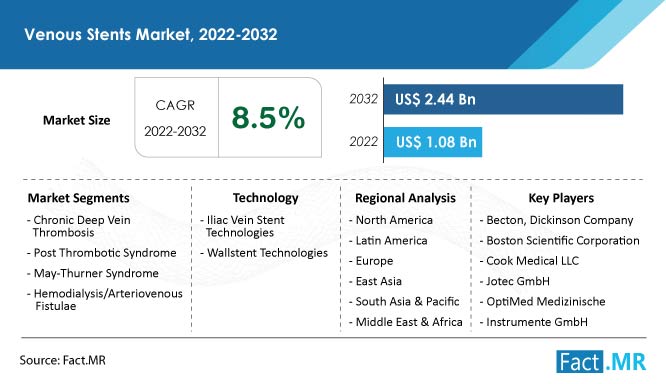 What is Outlook for Venous Stent Sales in the United States?

The United States currently dominates the North American venous stents market. The existence of major firms and their use of cutting-edge medical technologies to manufacture stents are primarily responsible for the larger share.

In addition, a well-developed healthcare infrastructure and significant financial investments by the government in the healthcare sector are some of the major drivers boosting sales growth. Furthermore, supportive government policies and a rise in research collaboration agreements are among the factors likely to boost demand for venous stents.

Why is Demand for Venous Stents Surging in European Countries?

The rising rate of the senior population coupled with increasing cases of cardiovascular disorders in European countries such as the U.K., Germany, and Italy is expected to increase sales of venous stents.

Sales of venous stents in Germany are predicted to expand at a CAGR of 7% during the forecast period. Thus, rising incidences of cardiovascular disorders in European nations are expected to fuel demand for venous stents.

Japan and South Korea are leading markets for venous stents, due to advancing healthcare infrastructure, increasing cases related to stress and hypertension, and rising incidences of heart attacks due to running lifestyle.

Manufacturers of venous stents are attracted to Japan and South Korea due to beneficial government policies towards healthcare. In recent years, Korean manufacturers are creating sophisticated medical gadgets in response to end-user requests to achieve maximum productivity.

Additionally, these producers are introducing advanced medical consumables for the efficient treatment of people with coronary disease, which is predicted to increase the demand for venous stents in South Korea.

For Which Disease Treatment are Venous Stents Most Widely Used?

In some cases, there are no obvious signs. The rising incidence of chronic deep vein thrombosis and new stent device introductions by the major market participants are the main factors boosting the demand for venous stents.

Thus, the above-mentioned studies show that the rising prevalence of chronic deep vein thrombosis is boosting the production of venous stents.

The global venous stents market is predicted to reach US$ 2.44 billion by 2032.

Venous stents are made of metal, usually of high-quality steel and nitenol.