Overall, the Maleic Anhydride landscape is poised to yield an absolute dollar opportunity worth US$ 1.2 Billion until 2032. Sales of Maleic Anhydride will continue to flourish, with a documented CAGR of 4.0% from 2015-2021.

Unsaturated polyester resins (UPR) are used in the production of lighter, stronger fiberglass composites for boats, cars, construction, wind turbine blades, and a diverse range of consumer products. It is a key ingredient in the manufacture of copolymers that enable the use of more sustainable raw materials, for example, to bind wood fibers into plastic, inhibit corrosion, create protective coatings for wire, and repel water in sunscreens.

Unsaturated polyester resins are used for a wide range of applications, making them a thermosetting system of major importance. These resins are compounded with varied fillers and reinforcements and cured using free-radical initiators to yield thermoset articles having a wide range of chemical and mechanical properties depending on the choice of diacids, diols, cross-linking agents, initiators, and other additives.

The demand for UPR is growing rapidly, and buildings and sanitary ware form the largest market for reinforced polyester resin (composite materials).

Construction is one of the largest end-use industries in North America. The US had implemented a National Infrastructure Plan to attract USD 590 billion in infrastructure investment from 2014 to 2018.

Such developmental initiatives led to an increase in the spending in the construction sector, thereby fueled the demand for UPR. Growth of the marine and automotive sectors also propelled the demand for UPR in the region in the last few years. All these factors in turn led to a massive growth in the Maleic Anhydride Market.

According to industry experts, the completion of construction of new houses was estimated to be around 315,000 units in 2019, which was higher, when compared to total completions in 2018, which were 300,000 units. The increasing migration to the country has been stimulating the current demand for new residential construction.

All the aforementioned factors are expected to boost the demand for maleic anhydride over the forecast period.

Although there is an alternative for petroleum-based maleic anhydride available in the market, there are few applications, such as UPR, copolymers, and 1,4-BDO, wherein maleic anhydride cannot be replaced by other substitutes.

The use of bio-based feedstock has its own advantages over conventional ones. The oil resources are limited, and the extraction of benzene and its further oxidation are expensive procedures.

The increasing sales of passenger cars and commercial vehicles drive the maleic anhydride market in the automotive industry. Maleic anhydride is used as an ingredient in UPR, which is further used to manufacture automotive composites, such as closure panels, body panels, fenders, Grille Opening Reinforcement (GOR), heat shields, headlamp reflectors, and pick-up boxes.

Increasing demand for UPR & 1,4-BDO from the automotive industry

The motorization rate has increased over the past five years in developed and the developing countries, owing to the increasing disposable income of people and industrial growth. The consistent rise in the number of vehicles is increasing the demand for engine oil, functional fluids, and automotive components in the emerging economies; thus, positively influencing the maleic anhydride market. 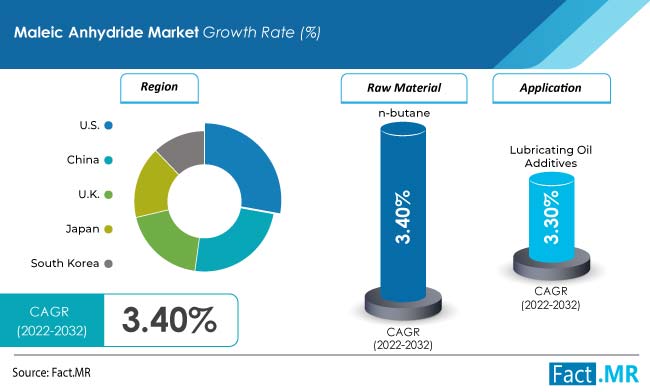 In the last few years, the fluctuating prices of the crude oil have affected the value chain of the maleic anhydride as crude oil is the raw material for benzene, that is used in the production and manufacturing of maleic anhydride.

Since 2011, the countries that eat big quantities of strength have been dealing with oil costs above USD 100 per barrel, which had fallen to about USD 50 per barrel in March 2020. Therefore, fluctuating crude oil prices have created uncertainties for maleic anhydride producers.

Hybrid vehicles contain both a small Internal Combustion Engine (ICE) and an electric motor for optimum power utilization and reducing emissions from vehicles.

The growing number of hybrid vehicles is expected to reduce the demand for engine oil, functional fluid, and transmission fluid per vehicle, almost by half, according to industry experts. This factor, coupled with the increasing battery parity, is expected to impact the volume of the maleic anhydride market.

Batteries for electric vehicles are very expensive; however, with improved technology, their cost is reducing, and the driving range per charge is increasing. These factors have a huge impact on engine oil consumption, especially with decreasing battery costs.

What is the Growth Outlook for Maleic Anhydride in the U.S?

The demand for Maleic Anhydride market in the US is likely to expand at a 3.2% value CAGR until 2032, forecast to yield an opportunity worth US$ 1.5 Billion.

The United States has one of the world’s largest construction industries, and it recorded an annual revenue of USD 1,306 billion in 2019. The United States is a major industrialized nation that houses multiple industries in heavy-scale, medium-scale, and small-scale categories. The country is known for its booming commercial activities.

How do Growth Prospects Appear in the Chinese Market?

China is Expected to Dominate the Market in Asia-Pacific

Maleic anhydride is used in industries such as food and beverage, pharmaceutical, automotive, construction, electronics, personal care, etc., in China. China is a major market for maleic anhydride in the world.

The growing construction industry is one of the major reasons boosting the applications of maleic anhydride in the region. China is globally recognized for its architectural boom. The demand for low-cost housing and commercial housing is the reason for its growth in recent years.

According to the National Bureau of Statistics of China, the revenue generated by the Chinese construction industry increased from CNY 17.67 trillion in 2014 to CNY 24.84 trillion in 2019.?

The country plans to invest USD 1.43 trillion in the next five years till 2025 in major construction projects. According to the National Development and Reform Commission (NDRC), the Shanghai plan includes an investment of USD 38.7 billion in the next three years, whereas Guangzhou has signed 16 new infrastructure projects with an investment of USD 8.09 billion. China is expected to reach US$ 293.5 Million by 2032, growing at a 2.8% CAGR.

Is Japan likely to emerge as an Opportunistic Maleic Anhydride Industry?

Japan is projected to be a significant maleic anhydride market, in terms of value, owing to the rise in the automotive production.

This dominance is attributed to the growing domestic industries, increasing demand from end-use industries, and growing use of maleic anhydride in different applications, such as agricultural chemicals and pharmaceuticals.

Why is the Market Demand Rising Rapidly?

n-butane to be Top Raw Material in the Coming Years

In addition, the n-butane segment is projected to witness higher growth in the forthcoming years, owing to stringent policies and regulations on the use of benzene for maleic anhydride production.

Which Application is Expected to Leverage Maleic Anhydride the Most?

The Lubricating Oil Additives of the Maleic Anhydride Market is expected to grow at a value CAGR of 3.3% from 2022-2032.

Lubricating oil additives is considered to be the third-largest application of maleic anhydride. Maleic anhydride is used in the production of hydraulic fluids and lubricating oil, in order to boost the performance of lubricants by providing them static and dust control, alkalinity, corrosion inhibition, emulsification, dispersion, low-temperature fluidity and shear stability.

The global market for Maleic Anhydride is characterized by the presence of multiple vendors, aiming to offer extensive products to consumers. Additionally, key makers are focusing on developing the technologies supported by the implementation of stringent government regulations, and are offering solutions tailor-made to suit their business objectives. In addition, the vendors are likely to leverage upgradation and product differentiation to gain an edge over other competitors in the market.

What was the market worth for Maleic Anhydride in 2021?

As of 2021, the Maleic Anhydride Market was estimated to have reached US$ 2.8 Billion.

What is the expected worth of the Maleic Anhydride Industry in 2022?

By 2022, the expected demand for Maleic Anhydride to reach US$ 2.9 Billion.

At what CAGR did the Maleic Anhydride Market flourish from 2015-2021?

What is the expected forecast CAGR for Maleic Anhydride from 2022-2032?

At what value will the market for Maleic Anhydride close in 2032?

What is the expected market value for the U.S Maleic Anhydride Market?

How opportunistic is the Chinese market for Maleic Anhydride?

China is expected to register a 2.8% CAGR with regard to the Maleic Anhydride Industry.

What is the expected growth rate for the Japanese market?

Japan is expected to document a CAGR worth 1.9% in the Maleic Anhydride Market.

Which Raw Material will account for the maximum Maleic Anhydride revenue?

By Raw Material, n-butane will expand the fastest, expanding at a 3.4% CAGR.

By Application, which category is likely to remain prominent until 2032?

By Application, Lubricating Oil Additives will remain most prominent category, expanding at CAGR of 3.3% until 2032.

How should thermal transfer label manufacturers strategize to experience steady growth in the market...

Direct Thermal Linerless Labels Market to expand at a 5% CAGR by 2031. Thriving E-Commerce sales are...

The global thermal conductive adhesives market is projected to grow at a positive CAGR of 6% over th...