As per detailed analysis by Fact.MR, the top 5 companies manufacturing milk frothers account for a market share of around 32.6%.

Milk frothers are used for coffee drinks and add a foamy touch to any latte, cappuccino, cold foam, and cold brew. Consumers also demand combination drinks that can easily be achievable by milk frothers. Milk frothers create tiny microbubbles and a creamy texture while increasing the overall volume of the drink.

Latest market analysis by Fact.MR, a market research and competitive analysis provider, states that the global market for milk frothers expanded at a CAGR of 2.5% over the 2017-2021 historical period. Plug-in milk frothers and battery-powered milk frothers are replacing traditional coffee-making accessories at a rapid pace.

Manufacturers of milk frothers are establishing strategic partnerships with local cafes and full-service restaurants to showcase their products and use them as a medium to advertise. Product pricing is an important factor in the milk frother market. Continuous R&D and investments are necessary, which makes it difficult for small-scale milk frother manufacturers to sustain in this dynamic market. 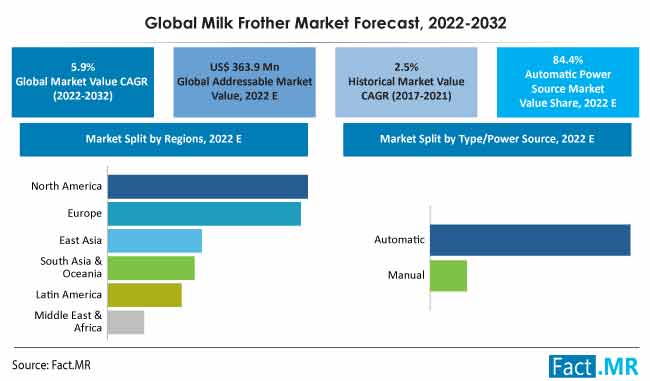 Why is Demand for Milk Frothers Expected to Substantially Rise across Regions?

A substantial portion of the market is taken up by automatic milk frothers, which have remained a vital demand generator in high-potential regions such as North America and Europe. Additionally, the market has remained very specific with regards to its needs and seldom changes its preference from one product to another, leading to high-volume sales of automatic milk frothers in developed markets.

Additionally, commercial clients have started preferring products that have high-end quality. Moreover, consumers are keen on knowing where their products are being manufactured and whether the sourcing has been done ethically. Consumer goods manufacturers have started realizing their commercial and residential consumer requirements and are developing agile supply chains to support this, which will soon be implemented across other emerging markets as well.

Manufacturers of milk frothers are looking for innovative methods to engage with their customers now more than ever. They're recreating and reimagining themselves in previously unthinkable ways. One of the key areas on which prime manufacturers will rely is innovation. To minimize operating costs at their manufacturing facilities, global companies have been investing heavily in ERM and other initiatives.

Besides, the pandemic situation has been helpful in the creation of omnichannel sales channels that combine the experience provided by online as well as offline stores, in an attempt to remain connected with loyal consumers while following all the protocols of social distancing.

What Makes the U.S. a Huge Market for Milk Frothers?

The U.S. is one of the prominent consumers and manufacturers of coffee products, and has grown rapidly over the years. The U.S. milk frother market currently accounts for US$ 75.1 million (3.9 million units of milk frothers).

Coffee is one of the most consumed beverages across the world, with approximately 42.6 litres consumed annually per person. Tea has a higher amount (85 litres in beverage equivalents annually per person), but coffee has a much higher valuation, since as compared to tea, more coffee powder is used per litre of beverage.

Milk frother value sales have recently been propelled due to high demand from the household/residential sector as coffee consumers are rising in the U.S., which acts as a growth driver for the market. Another trend that has driven premiumization is the redefinition of coffee from a common source of caffeine to a sensual experience.

Will Milk Frother Manufacturers Gain from Focussing on the German Market?

Germany accounts for the high demand for milk frother products in the European region. In Germany, the top milk frother manufacturers provide products with aesthetic designs and high-product performance as compared to other countries. They also gain a competitive advantage over other brands operating in the region by providing service specified products that have a lot more functionality in terms of usage.

The German milk frother market is estimated at US$ 21.7 million in 2022 and is expected to expand at a CAGR of around 7.6% over the decade.

e-Commerce sales of milk frothers are rising rapidly, and the overall milk frother market is foreseen to double its market valuation in Europe by 2032.

The automatic milk frother market is anticipated to be the most lucrative during the forecast period. This segment currently accounts for 84.4% market share and is estimated to generate US$ 307.1 million in 2022.

The manual milk frother market is set to create an absolute $ opportunity of US$ 32.1 million by the end of the assessment period. Furthermore, demand for battery-powered milk frothers is also rising due to enhanced battery life and symmetrical designs that have improved over the years.

Automatic milk frothers are more compatible & durable and have a longer lifespan as compared to manual milk frother products that usually include composites in terms of material.

In the North American region, the plug-in milk frother market is growing rapidly due to high demand from the commercial sector as compared to the residential sector.

Milk frother brands from the top two tiers have started collaborating with small-scale manufacturers who have a more local customer base and advanced technology. The price point of automatic milk frothers plays a vital role in catching consumers’ attention, and most manufacturers are focusing on reducing packaging and supply chain costs to reduce the product’s final cost.

Fact.MR has provided detailed information about the overall strategies adopted by key suppliers of milk frothers, along with a detailed overview of the milk frother market analysis by type/power source, including SWOT analysis and sales generated from target products.

How is the global milk frother shaping up?

Which power source is most popular in the milk frother market?

Plug-in milk frothers are hugely popular due to their handy product design and high performance.

How did the market fare over the past half-decade?

Who are the most well-known manufacturers of milk frothers?

What share of the market is held by the North American region?