Petroleum coke is used in several industries, including energy production, construction, aluminium and other metals, and so on. Around 80% of global petroleum coke production is 'fuel grade petroleum coke', which is utilised in power plants and cement kilns.

Graphitized petroleum coke is widely utilised in the steel business as a fuel, in the precision casting industry as a reduction inoculant, in the metallurgy sector as a refractory material, and various other fields.

Owing to refinery production restrictions and dropping gasoline and jet fuel use due to the coronavirus pandemic, some refineries had restricted their supply of petroleum coke. Because of this, petroleum coke suppliers faced tremendous losses.

However, now petcoke distribution and supply agreements are a prominent trend in the industry, and this is expected to act as a catalyst for market growth.

Cocaine laced with needles is known as acicular cocaine. It's a highly crystalline petroleum coke used in the aluminium and steel industries to make needle coke electrodes.

Electrodes for needle coke are valuable since they must be replaced regularly, this boosts sales growth of the petroleum needle coke market.

The global petroleum coke market is anticipated to progress at a CAGR of 9.6% to reach US$ 63.10 billion by 2032. Petroleum coke market size will be driven by rapid industrialization and rising demand for aluminium smelter anodes for manufacturing purposes. 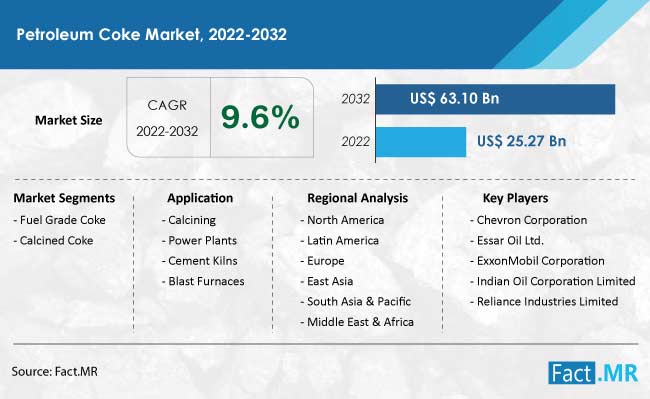 Rising cement and power generation industries in developing nations such as China and India are also helping to boost petroleum coke demand. Furthermore, increased exports of petroleum coke are boosting the market growth.

Which Sectors are Driving Sales Growth of Petroleum Coke Market?

“Use of Petcoke in Various Sectors Due to Numerous Benefits”

The market is expected to develop due to the changing trend of employing petcoke in medicinal, electrical components, and ceramics applications due to its numerous benefits.

Petcoke is anti-corrosion, lightweight, and ductile, as well as having excellent electrical and thermal conductivity. Furthermore, the increasing rise of the electronic industry is expected to boost the market for petcoke.

Which Factors Can Negatively Affect Sales of Petroleum Coke?

Because of its high sulphur content, which has negative consequences for both aquatic and terrestrial habitats, the government has implemented several rigorous regulations to limit the use of petcoke. The misuse of petcoke can affect the natural environment, which may result in hazardous effects.

How is Demand for Petroleum Coke Evolving in China & India?

The Asia Pacific petcoke market is likely to gain a lot of traction in the coming years, due to the spectacular development in China and India's market growth.

Petroleum coke is anticipated to play a big part in India's cement industry. China's power plants are expected to employ a large share of petroleum coke to generate electricity.

The increase in population and aggressive modernization in these countries is projected to boost the prospects of petroleum coke suppliers.

Which Factors are Assisting Petroleum Coke Market Growth in the U.S.?

“High Production of Petroleum Coke in the United States”

Currently, the United States is expected to hold a strong presence in the export of petroleum coke. In 2022, the U.S. is likely to hold 95.3% of the North America market share.

Low petcoke production cost is anticipated to be a major USP for its acquisition, as it allows for the production of a large amount of power at a low cost. Apart from that, a small amount of petroleum coke can generate a big amount of heat.

According to research, the aluminium industry is a major purchaser of calcined coke. By 2032, it might account for 75% to 80% of the global demand for calcined coke. Steel, paper, paint, and chemical industries are expected to secure the remaining percentage of calcined coke demand.

In these industries, calcined coke could be used to produce titanium dioxide pigments. Calcined coke is also widely used in the fertiliser, glass, brick, and colourings industries. Because of the increasing crude oil supply around the world, the worldwide calcined petroleum coke market is rapidly expanding.

On the other hand, fuel grade petroleum coke is expected to play a significant role in the power and cement kiln industries. Because of its capacity to combine with typical coal-fired boilers, this type of petroleum coke may be in high demand.

The petroleum coke market is predicted to increase due to expanding opportunities from several end-use industries. Paints and coatings, steel, fertilisers, and other sectors' growth are projected to generate significant potential for the industry.

Key competitors in the global petcoke market are seeking to expand their production capacity to meet global demand and capture a higher market share.

What are the main reasons driving demand growth of petroleum coke?

What will the market value of petroleum coke reach by 2032?

Market value of global petroleum coke market projected to reach US$ 63.10 billion by 2032.

Which established players are involved in the global petroleum coke market?

What are the key factors boosting petroleum coke market growth?

What is the forecasted growth rate for the petroleum coke market?

Global sales of petroleum coke are expected to increase at 9.6% CAGR through 2032.

Which are the most lucrative regional market for petroleum coke manufacturers?

North America and Asia Pacific predicted to be most profitable regions for petroleum coke suppliers.

Bio-based Platform Chemicals Market to reach a valuation of US$ 23 million with demand for C-5 platf...

The fermentation chemicals market to grow at a CAGR of 5% and is estimated to reach a value of nearl...