The growth is attributed to the growing chemical industry that requires propane sultone as an intermediate during the manufacturing process of various chemicals.

Propane sultone is easily soluble in water and organic solvents, including ketones, esters, and aromatic hydrocarbons and is found as a colorless liquid or white crystalline solid. Propane sultone act as a chemical intermediate in the manufacturing process of detergents, lathering agents, dyes, bacteriostats, insecticides, fungicides, cation-exchange resins, vulcanization accelerators, and corrosion inhibitors.

The demand for these products is anticipated to increase owing to the rising population, industrialization, and urbanization.

The global consumption of pesticides reached around 4.5 million tons in 2021 and is expected to increase further in the coming years owing to increased agricultural activities. Thus, paving the way for the propane sultone market.

According to the Fact.MR, a market research and competitive intelligence provider, the market is projected to exhibit growth at 5.9% CAGR between 2023 and 2033. 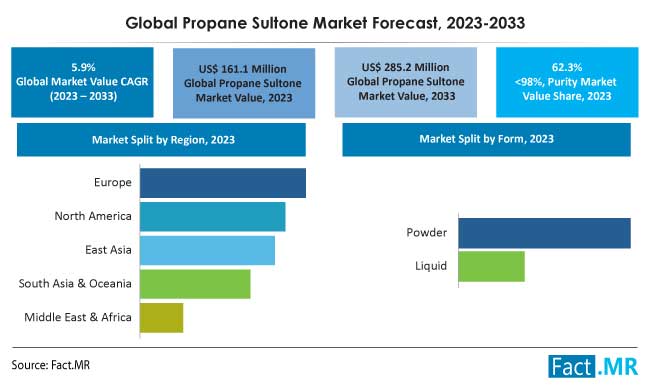 Market share analysis of propane sultone based on form and region is provided in a nutshell in the above image. Under the form segment, the powder sub-segment dominates with a 72.8% market share in 2023.

Propane sultone has been used as an intermediate in the pharmaceutical industry. Additionally, it has been employed to make hydroxyl sulfonate to be utilized in foam treatment and micellar polymer flooding for better oil recovery.

In addition, the substance is employed for laboratory chemical synthesis as well as the production of goods for the galvanotechnical and photography industries.

Further, in order to increase the hydrophilicity of dyes, polymers, nucleosides, and proteins, 1,3-propane sultone can be utilized in the form of sulfonic acid, sulfonate, and sulfonamide. It is also frequently employed in the production of several kinds of surfactants.

Its wide range of applications in various industries will drive the market of propane sultone providing ample opportunities to the manufacturers.

Short-term exposure can cause irritation in the skin, eyes, nose, and throat if inhaled. When reacting with reducing agents such as aluminium, lithium, sodium, and their hydrides, propane sultone produces flammable and toxic hydrogen sulfide gas. It reacts with moist air to form propane sulfonic acid which is toxic in nature.

Workers dealing in the formulation of compounds produced by utilizing 1,3-propane sultone are at the greatest risk of exposure and thus various organizations around the globe such as the American Conference of Governmental Industrial Hygienists, SCOEL recommends to use of appropriate protective equipment to limit exposure to as low as possible.

Owing to the above-mentioned factors, the demand for propane sultone can be affected.

What Factors Driving the Growth of the Propane Sultone Market in the US?

The United States possesses one of the world's largest manufacturers of electric vehicles, and propane sultone is used as an electrolyte additive in the manufacture of lithium-ion batteries.

These factors will lead to an increase in the demand for propane sultone in the country over the forecast period.

Why does China stand out as one of the Prominent Destinations for Propane Sultone Manufacturers?

The growing population in China is leading to increased agricultural activities to meet the growing demand. This in turn increases the demand for pesticides such as insecticides, herbicides, and fungicides. The manufacturing process of fungicides utilizes propane sultone as a chemical intermediate.

Why is Multi-Layered Propane Sultone dominating the market?

Propane sultone is mainly utilized as a chemical intermediate in various end-use industries due to its high sulfonating capacity. Propane Sultone is an exceptional sulfonating agent that can accurately add sulfonic acid groups to a wide range of compounds under extremely mild circumstances and give these compounds new characteristics. Propane sultone is employed as a chemical intermediate in the manufacturing process of fungicides, dyes, and detergents.

1,3-propane sultone as an intermediary is used in the manufacturing of various sulfopropylated products, such as detergents, surfactants, wetting agents, and dyes. Dyes are frequently used in the textile industry to add color to a surface by changing the crystal structure of the colored components.

One of the most important aspects of the effective trading of textile goods is the dyeing process. The consumer typically looks for product qualities, such as good fixation with regard to light, perspiration, and washing, both initially and after lengthy usage, along with design and color.

Manufacturers are inclined towards adopting groundbreaking strategies to gain high-profit margins. Long-term trade relations with end-users and offering customized services to enable market players to have a competitive edge in the market. Further, strengthening the distribution channel remains a key strategy among players to cover a wider geography and strengthen their position.

The global propane sultone market is anticipated to be valued at US$ 161.1 million in 2023.

Worldwide demand for propane sultone is anticipated to reach US$ 285.2 million by 2033-end.