The global PVC emulsion market is gaining traction and is expected to expand at a steady CAGR of around 4% through 2031, owing to a wide variety of products being developed by key manufacturers. With application in key segments such as surface coatings, printing inks, and fabric coatings, to name a few, gaining prominence, suppliers of PVC emulsions are forecast to gain higher profits over the coming years.

The latest report on PVC emulsions by Fact.MR offers a thorough analysis of the global industry, crucial factors, new trends, and growth scope during the forecast period of 2021 to 2031. According to the report, North America and Europe will hold a major pie of the global industry, while the market in Asia Pacific will experience the fastest growth during the forecast period.

Sales of PVC emulsions have surged steadily over the past years, owing to increase in demand in wall paintings, floor and fabric coatings, and other applications. Rise in investments by leading industry players and adoption of advanced technologies further aided industry growth during last 5 years from 2016 to 2020.

With requirement from building, construction, and automotive industries increasing steadily, PVC emulsion providers are set to gain higher profit margins over the coming years. Rise in number of manufacturing hubs, expansion of interior designing and construction sectors, and a flurry of new product launches by key players are expected to raise industry value further through 2031, which is slated to progress at around 4% CAGR over the next ten years.

Why is Application in Building & Construction Surging?

PVC emulsions have wide application in the construction industry, in-

As a result, demand from this industry is propelling the growth of manufacturers across regions.

What are the Key Challenges Faced by PVC Emulsion Suppliers?

There are a few disadvantages of PVC emulsions that often create challenges for suppliers, such as-

However, with increasing R&D activities and growing focus on production, manufacturers are expected to resolve these issues in the near future. 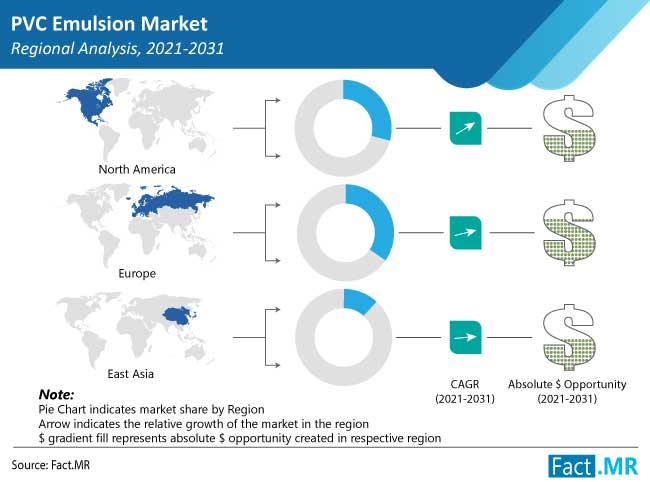 What’s Fueling Sales of PVC Emulsions in the United States?

The United States is a prominent market in North America for PVC emulsions, owing to high demand from its huge automotive and construction sector. As stated in a report published by SelectUSA, since Honda opened its first U.S. plant in 1982, almost every major European, Japanese, and Korean automaker has produced vehicles and invested more than US$ 75 billion in the U.S.

According to the report, in 2018, the U.S. exported 1.8 million new light vehicles and 131,200 medium and heavy trucks around the world. This implies the high growth scope for PVC emulsion suppliers in the U.S.

Being at the forefront of Europe’s market for PVC emulsions, Germany is catching the attention of key players. Highly advanced manufacturing hubs and rise in application in the construction & building sector are bolstering market growth in Germany.

According to a report titled “European Construction Sector Observatory”, published by the European Commission (EC), Germany’s construction sector is highly progressive and the leading contributor in the European Union (EU).

As stated in the report, Germany’s construction sector grew by 10% during 2010 to 2016, while in 2016, the GDP of Germany amounted to EUR 2,843 billion, including a significant contribution from its construction sector. With these figures anticipated to rise further, Germany is set to remain a hotspot for PVC emulsion manufacturers over the coming years.

China has emerged as the leading contributor in Asia Pacific for PVC emulsions, and is likely to maintain its leading position during the forecast period. Advanced construction and automotive sectors are aiding the growth of PVC emulsion manufacturers in the country.

According to a report published by SelectUSA, China’s construction industry is set to grow by 5% through 2023, while the country’s increasing emphasis on green buildings will further cater to this growth. As stated in the report, China State Council Green Building mandates that public buildings such as schools, hospitals, museums, stadiums, and others must meet green building criteria. This is not only helping in the development of the construction industry but is indirectly paving new paths for PVC emulsion providers across the country.

Will India Exhibit Hegemony in Demand for PVC Emulsions?

Backed by growing construction and architecture sectors and highly developed manufacturing infrastructure, India is in the spotlight for PVC emulsion industry players. According to a report published by Invest India, the construction industry in India contributes nearly 9% of the country’s GDP, while nearly 51 million people are employed in this sector.

As stated in the report, India will be required to spend US$ 454.8 billion on infrastructure development in the construction sector. This indicates upcoming opportunities for PVC emulsion suppliers in India.

Presently, high application in flooring & wall coverings is spurring the growth of PVC emulsion suppliers, owing to various factors such as-

With the competition getting stricter, players manufacturing PVC emulsions are diversifying their products.

Which are the top companies manufacturing PVC emulsions?

Some of the top companies manufacturing PVC emulsions are Kem One, Kaneka Corporation, and SCG Chemicals Co., Ltd.

Which are some of the lucrative markets for PVC emulsions?

The United States, Germany, China, Japan, India, the United Kingdom, Canada, Italy, France, and a few others are lucrative markets for PVC emulsions, and are expected to dominate throughout the forecast period.

Which application accounts for high sales of PVC emulsions?

Presently, the flooring & wall coverings segment is the most lucrative in terms of application, and is expected to remain dominant over the forecast period of 2021 to 2031.

Which other types of PVC emulsions are commonly used?

Global froth flotation chemicals market is expected to exhibit a CAGR of above 2% during the forecas...