The global pigment emulsion market experienced year-on-year (YoY) growth of 1% to reach US$ 12.6 billion at the end of 2021. As per forecasts, sales of pigment emulsions are predicted to increase at 7.6% CAGR and reach a market valuation of US$ 28.3 billion by the end of 2032.

There are two forms of pigment emulsions: water in oil and oil in water. The fine dispersion of a pigment in an aqueous, solvent, or universal system is known as a pigment emulsion. This is employed in a variety of industrial applications to achieve the desired qualities, including permanence and stability.

Paints & coatings dominate the pigment emulsion market, and this dominance is expected to continue over the forecast period as well. Demand for high-performance pigment emulsions has increased across end-user sectors, and a desire for eco-friendly products will also drive pigment emulsion consumption.

Latest market analysis by Fact.MR, a market research and competitive intelligence provider, suggests that the market value for pigment emulsions increased at a CAGR of around 2.2% during the last five years, with the market reaching US$ 12.6 billion at the end of 2021.

The current process of making pigments involves the usage of raw materials such as titanium dioxide, calcium carbonate, aerosol, etc., which are non-renewable sources in nature and also hazardous to the environment. The future demands shifting to renewable sources of energy. This will help countries preserve their natural resources that are limited in nature.

Bio-based pigment emulsions are currently priced quite high, but in the future, as the production and supply increase, their prices will gradually reduce.

Demand for pigment emulsions, which find usage across diverse end-use verticals, is poised to escalate at a high CAGR of 7.6% through 2032. 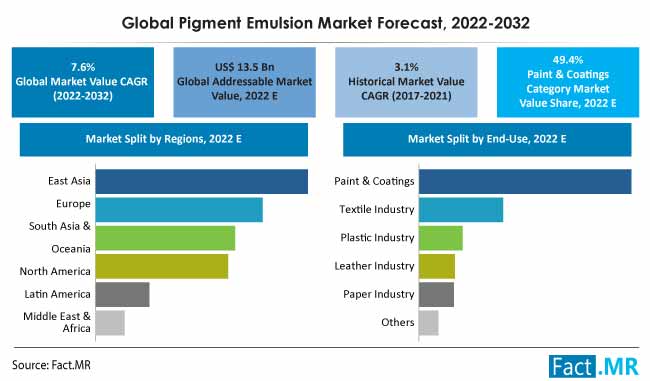 Why is the Market Seeing High Escalation in the Sales of Pigment Emulsions?

Pigment emulsions are used to meet desired properties such as permanence and stability in various industrial applications. Market players have witnessed strong demand from emerging markets in Asia Pacific, such as China and India.

A pigment, a binder, and a solvent make up paint. Paint pigments and coating pigments, as raw materials, make up a small (5% of the US$ 4.5 trillion global chemicals sector), and yet they are highly essential. High-quality pigments and emulsions are one of the most important elements in paints, coatings, and inks.

After paints, textiles is the largest demanding sector for pigment emulsions. Growing demand for use in various textile processing applications such as printing, dyeing, etc., is the major factor supporting the growth of the pigment emulsion industry. The textile market, which is in a growth phase, is anticipated to reach US$ 1.2 trillion by 2024.

With such escalating pigment emulsion demand, the market is projected to create an absolute dollar opportunity worth US$ 15.6 billion over the 2022-2032 assessment period.

Why Does Asia Pacific Account for the Most Consumption of Pigment Emulsions?

In terms of value, the East Asia pigment emulsion market dominates the global landscape. By 2032, demand for pigment emulsions in the region is predicted to have grown 2X. Moreover, China will remain the major growth driver during the forecast period, expanding at a CAGR of 7.2% during the same time frame.

Why are Pigment Emulsion Suppliers Lining Up in North America?

Being one of the largest textile producers, the North America pigment emulsions market is on the rise as demand for textile pigment emulsions for various processing applications in the textile industry, such as dyeing, printing, processing, etc., is growing. Rising construction expenditure in the region complemented by the rising demand from the automobile industry will amplify the North America pigment market growth during the forecast period.

China is the largest pigment producer in the world. It is also the biggest export centre to the world for many commodities/products. Rapid industrialization and the spread of urbanization have resulted in increased construction, and have thereby driven the demand for pigment emulsions.

Population growth in China is likely to continue driving residential development in the country. The country's rising household income levels and population shift from rural to urban areas are predicted to keep driving the residential construction sector. China plans to invest more than US$ 1.4 trillion in development projects over the next five years.

Such initiatives keep the market competitive and ever-ready for newer challenges in the future.

Why is Pigment Emulsion Application in Paints So High?

Rapid growth in infrastructure in developing countries is driving the demand for various raw materials, one being pigment emulsions. Increase in construction and infrastructure activities, especially in Asia Pacific, is one of the main reasons why the pigment emulsion market is growing. Developing countries such as India are still in the phase where there is a lot of development required in infrastructure for providing support to industries to stimulate economic growth and improve the quality of life.

Why is the World Witnessing High Demand for Organic Pigment Emulsions?

Due to rising awareness about environmental issues and concerns, demand for organic dyes and pigments is more as compared to inorganic pigment emulsions. Inorganic pigment emulsion production involves raw materials such as titanium dioxide and polyvinyl acetate, which are harmful and cause high carbon emissions. Many governments have also put restrictions and strict laws on reducing carbon emissions and making environment-friendly products.

Out of the applications considered in the scope of the study, demand for organic pigment emulsions is anticipated to surge at the highest CAGR of 8% to reach a market valuation of US$ 18.9 billion by 2032.

What is the current valuation of the pigment emulsion industry?

Currently, the global pigment emulsion market is pegged at US$ 12.6 billion.

At what CAGR is pigment emulsion market volume demand poised to grow?

Pigment emulsion utilization is anticipated to increase at a CAGR of around 7.6% during the 2022-2032 forecast period.

Who are the top pigment emulsion manufacturers in the market?

What is the go-to-market strategy for market players?

Capacity expansion and forward contracts with end-use industries have been the go-to strategy to ensure regular sales in the highly competitive market.

What outlook does the East Asia pigment emulsion market provide?

East Asia is anticipated to account for around 33% of the global pigment emulsion market value by the end of 2032.

Writing Paper Market is expected to witness steady growth by 2028. Innovation of new technologies is...

The recovered paper market is expected to witness steady growth during 2021-2031. The contemporary p...