In real-time polymerase chain reaction (real-time PCR), product quantity is determined after each cycle and the existence of the amplification product is assessed as the reaction develops in real-time. The real-time PCR steps are described in the qPCR process below. First, PCR reagents and unique or custom primers are used to set up amplification reactions.

The reactions are then carried out using real-time PCR techniques, and the gathered data is analysed using specialized instrumentation. The two main categories of qPCR reagents are intercalating dye assay and 5′ nucleic assay.

To quantify DNA amplification during PCR, an intercalating dye assay uses real-time fluorescence of a dye that binds to double-stranded DNA. When linked to dsDNA, the dye's modest background fluorescence often rises dramatically. An important development in nucleic acid quantification is the creation of 5′ nuclease assays.

A dual-labelled probe that was annealed to a target gene during amplification is cut apart by the 5′-3′ exonuclease activity of Thermus aquaticus polymerase. Real-time PCR/qPCR tests have become the go-to method for calculating and analysing nucleic acid in a diverse range of biological samples, with uses ranging from gene expression analyses to the detection of genetically modified food to cancer phenotyping.

As a result of such predictions, worldwide demand for dye-based diagnostic qualitative PCR reagents is expected to increase over the coming years, as per this new study by Fact.MR, a market research and competitive intelligence provider.

Why is Demand for qPCR Reagents Increasing across the World?

Increasing prevalence of infectious and genetic disorders is boosting the rate of diagnostic tests, which helps people take preventative measures. The use of genetic tests is expanding as the elderly population is growing rapidly.

In the past ten years, several genome projects have been launched. This has made it possible for scientists to learn more about the human genome. These activities always entail genetic analysis and gene sequencing. These requirements are boosting the need for qPCR equipment, which is further driving the growth of the qPCR reagents market.

The real-time PCR (qPCR) instruments market is expanding primarily as a result of analytical equipment sales explosive rise. Also, the rising prevalence of food product adulteration and the growing demand for precise diagnostics is boosting sales of qPCR reagents. Investments in research and development activities by respective governments and also the development of food safety and diagnostics regulations are boosting the demand for quantitative polymerase chain reaction (qPCR) equipment.

What Do Producers of qPCR Reagents Need to Watch Out For?

To provide the desired results, a typical PCR analysis using a qPCR instrument integrates a range of scientific approaches. These are small and instruments have quick cycle times.

However, the development of such tools unavoidably necessitates significant financial outlays in addition to genuine nanoscale scientific confirmation. The cost of qPCR equipment is usually around US$ 50,000, due to the high prices, price-conscious end users have been reluctant to switch to qPCR instruments, which is expected to slow the sales growth. 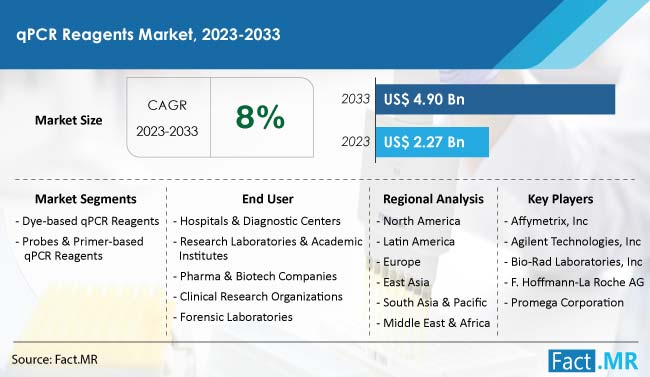 What is Supporting Sales of qPCR Reagents in the United States?

The rising prevalence of cancer and infectious disease is high in the United States. Along with this the adoption of new technologies for DNA testing is boosting the sales of qPCR reagents in the nation.

In the United States, cancer primarily affects women in their middle and later years. The need for qPCR reagents for diagnostics is thus rising. The United States market is expected to grow at a profitable rate over the projected period due to the high rate of cancer cases in the nation.

What is Benefitting Manufacturers of qPCR Reagents in Germany?

In the European region, Germany is considered to be the best in manufacturing cell and gene testing products. Sales of qPCR reagents in Germany are expected to evolve at a CAGR of 6% during the forecast period. Also, Germany is rapidly developing in the gene sequencing sector which is expected to increase the qPCR reagent demand.

More than 238 firms involved in regenerative medicine are based in Europe. A quarter of the world's therapeutic regenerative medicine developers are based in Europe. Germany currently has significant cell therapy-related companies that are developing new cell testing products. Thus, such aspects are boosting the sales of qPCR reagents in the nation.

Why are China & Japan Leading Markets in the Asia Pacific Region?

Some of the profitable marketplaces in the Asia Pacific region are China, Japan, India, and South Korea. China and Japan are considered the hub of gene therapies.

The rapid development of the pharmaceutical industry, the presence of a large geriatric population, and the rising incidence of chronic diseases brought on by pollution as a result of rapid industrialization and urbanization, as well as genetic disorders, are all factors contributing to the market growth in these two countries.

The qPCR reagents market in China and Japan is expected to expand quickly because of the large target patient base in these countries and the development of production capacity by leading manufacturers to fulfil the rising demand. Sales of qPCR reagents in China & Japan are expected to increase at CAGRs of 7.5% and 7%, respectively, during the next 10 years.

Which Aspects are Driving the Sales of qPCR Core Kits?

The demand for qPCR core kits is significantly increasing due to aspects such as core kit affordability (compared to Mastermix pricing), end user's adaptability (because it is preferable for researchers to design separate response protocols), and rising private-public financing for life science research.

Some of the key players in the qPCR reagents market are also adopting various marketing tactics such as fluctuations in pricing trends, new developments in products, enhancing supply chain management, partnerships, collaborations, and others to earn more market share.

Worldwide sales of qPCR reagents are projected to reach US$ 4.90 billion by 2033.

Global demand for qPCR reagents is predicted to increase at a CAGR of 8% during the forecast period.

Increasing rate of elderly population, rising patient base for genetic and infectious illnesses, and technological improvements in life sciences are contributing to market growth.