The global sulfur fertilizer market is gaining steady traction at a CAGR of over 3%, and is set to surpass a valuation of US$ 5.5 billion by 2031. Increasing application in diverse sectors such as cereals & grains, fruits & vegetables, and others, coupled with advancements in the agriculture industry, is fueling sales of sulfur fertilizers around the globe.

Demand is predicted to be higher for sulfate and elemental sulfur fertilizers across geographies.

The recent report on sulfur fertilizers by Fact.MR depicts a thorough analysis of the global industry, its demand-supply patterns, potential, growth scope, and driving & restraining factors during the forecast period of 2021 to 2031.

As per the report, high requirement in China, the United States, the United Kingdom, and a few other countries will cater to global industry growth, while North America, Europe, and Asia Pacific will remain leading regional players over the next ten years.

The industry thrived on growing demand from key application sectors such as oilseeds & pulses, fruits & vegetables, and cereals & grains, to name a few. Furthermore, increase in governmental investments in the agriculture sector and rise in number of research & development (R&D) activities by leading players aided industry growth during the last 5 years from 2016 to 2020.

As the manufacturing sector is getting more advanced with the incorporation of new-edge technologies, key players are likely to gain higher profit margins over the coming years. With production of a variety of sulfur fertilizers such as elemental sulfur, sulfate, liquid sulfur, and others, sales of sulfur fertilizers are predicted to increase further through 2031.

Is Application of Sulfur Fertilizers Rising in Agriculture Sector?

Sulfur fertilizers, being an integral part of soil fertilization for various fruits, vegetables, and crops, see high demand from the agriculture sector. With surge in the demand from this sector, key players are expected to gain more benefits in the foreseeable future.

According to a report published by Select USA, the U.S. agribusiness industry produced US$ 388.5 billion in agricultural products in 2017, while the industry directly employs over 311,000 workers in farming, fishing, and forestry occupations. These figures imply the high demand for sulfur fertilizers in the agriculture sector, not only in the U.S., but around the world.

What are the Key Challenges Faced by Sulfur Fertilizer Manufacturers?

There are a few disadvantages of sulfur fertilizers that often work as challenges to key players, such as-

However, with growing efforts by manufacturers on R&D activities, key players are likely to overcome these constraints in the near future. 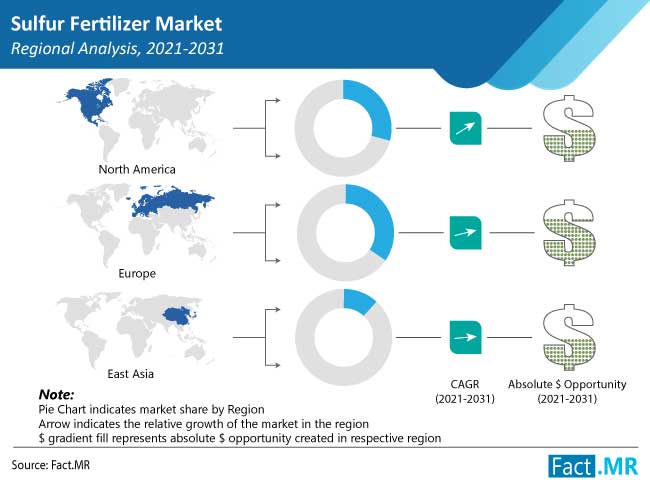 What’s Fueling Sales of Sulfur Fertilizers in the United States?

The United States has been a leading market for sulfur fertilizers since the past decade, and is expected to remain dominant during the forecast period as well. Highly advanced manufacturing and agriculture sector is propelling demand growth in the U.S.

According to a report published by the International Trade Administration (ITA) on 21st November 2019, the United States agribusiness holds high potential, while the U.S. agribusiness was valued at US$ 14.1 billion in terms of Foreign Direct Investment (FDI) position.

As stated in the report, in the past 5 years, top sources of U.S. agribusiness greenfield projects by announced capital investment are Norway (US$ 809.7 million), Germany (US$ 674.3 million), and a few other countries. No doubt that players are targeting the U.S. in order to raise their profit margins.

How Big is the Opportunity in Germany for Sulfur Fertilizers?

Germany is dominating in Europe’s market for sulfur fertilizers, and is predicted to sustain its position in the near future. Highly developed manufacturing hubs and expanding agriculture industry are spurring demand growth in Germany.

As stated in a report titled “Performance of the Agriculture Sector”, published by the European Commission (EC) on 12th April 2021, the agriculture industry contributed 1.3% to the European Union (EU)-27’s Gross Domestic Product (GDP) in 2020, with Germany as the leading contributor.

As stated in the report, value of the output produced by EU’s agricultural industry was an estimated EUR 411.8 billion in 2010, with Germany as a major contributor. This explains why stakeholders of sulfur fertilizers are emphasizing on Germany for the future.

Will China Remain at the Forefront of Asia Pacific’s Market for Sulfur Fertilizers?

China is at the forefront of the world’s fastest-growing market for sulfur fertilizers - Asia Pacific, and is anticipated to remain in this position throughout the forecast period. Steady expansion of manufacturing sector and advancements in agriculture are spearheading demand growth in China.

According to a report titled “China’s Plan to Promote Modern Agriculture”, published by the Government of China, the Chinese government has taken more measures to develop modern agriculture by 2020, according to a plan released by the state council. As stated in the report, national output of grain in 2020 reached 550 million tons, which is 50 million tons more than in 2015.

Why are Manufacturers of Sulfur Fertilizers Focusing on India?

India has emerged as a highly lucrative destination for sulfur fertilizer manufacturers, owing to abundance of raw materials, labor, and advanced agriculture sector.

As stated in a report published by the India Brand Equity Foundation (IBEF), agriculture is the primary source of livelihood for around 58% of India’s population, while the Gross Value Added (GVA) by agriculture, forestry, and fishing was estimated at US$ 276.37 billion in FY20. As per the report, growth in GVA in agriculture and allied sectors stood at 4% in FY20. This indicates the high growth scope for sulfur fertilizer manufacturers in India.

Which Type of Sulfur Fertilizer is Highly Preferred?

Presently, sulfate is the leading segment in terms of type of sulfur fertilizer, and is set to sustain its leading position, owing to the various advantages such as-

Other key segments fueling sales are elemental sulfur, liquid sulfur, and others.

The global market is fragmented and thriving on key players. In order to secure their positions, key industry players are launching a wider variety of products.

The United States, Germany, the United Kingdom, Croatia, India, Japan, China, Canada, France, Italy, and a few others are lucrative markets for sulfur fertilizer buyers and suppliers, and are expected to dominate throughout the forecast period.

Presently, sulfate is the most lucrative in terms of type, and is expected to remain dominant over the forecast period of 2021 to 2031.

Presently, cereals & grains cater to high demand for sulfur fertilizers, and are predicted to sustain this position throughout the forecast period.

*37 figures and 126 tables includes by FactMR