Suppository manufacturing is a niche field in drug formulation and dosage form factor design is challenging. However, the emergence of advanced technologies and growing awareness among the population are changing the trend with rapid adoption. Rectal suppository contributed more than 50% share of the overall market in 2022 and is further expected to capture a large portion in the latter half of the decade.

Suppositories, being an ancient form of drug delivery systems, have garnered a lot of attention from healthcare professionals to treat patients who have generally resisted any type of oral therapy. Absorption of drugs through mucous membranes provides rapid onset of action by delivering drugs directly into body cavities, avoiding the first-pass metabolism, which, in turn, has influenced the use of suppository dosage forms worldwide.

Despite the tremendous benefits associated with its usage, pharmaceutical suppository demand is still nascent in developing regions owing to the lack of knowledge among people about the various complementary health approaches. As such, sales of suppositories have observed gradual growth during the historical period at a compound annual growth rate of 4.3%.

Kidney damage or failure caused by chronic orally administered drugs will increase the plea for other drug delivery systems over the forecast period, thereby accelerating the sales of suppositories. In addition, raising awareness among the population regarding the benefits associated with the use of suppositories through government public outreach campaigns will favorably impact the growth of the target market over the coming years.

Why is Usage of Suppositories Steadily Increasing?

Bowel disorders are highly prevalent across the world and can affect every member of a family irrespective of age, gender, race, or socioeconomic status. Lack of public awareness and shyness to frankly open up to healthcare professionals and obtain proper treatment contributes to tardy consultation, late diagnosis, and the development of potentially preventable complications associated with functional bowel diseases.

However, rising awareness through various government initiatives for the early diagnosis and treatment of bowel disorders with the help of suppositories can improve patients’ outcomes and reduce the incidence of complications. Use of suppositories helps in soothing hemorrhoidal tissues and promotes normal bowel movements, thereby influencing the population to take up suppository dosage forms.

As such, the application of suppository dosage forms to treat various bowel disorders will lead to market expansion.

“Growing Geriatric Population across the World”

The global geriatric population is growing at an unprecedented rate. It is estimated that around 8.5% of the world’s total population is aged 65 and over. Factors such as socio-economic conditions, availability of preventive care, reimbursement policies, etc., have influenced this rise.

With an increased lifespan comes a greater need for care. A large part of the geriatric population is bedridden and unable to take oral medications. They are vulnerable to various health complications such as constipation, recurrent urinary tract infections, etc. Use of suppositories to ensure proper nursing and care for patients confined to a bed is anticipated to fuel the worldwide demand for the target product.

What Issues Do Suppository Manufacturers Face?

Manufacturers require to follow standard regulations as per USP & IP to manufacture suppositories. Manufactured suppositories need to be stored under cool conditions to avoid melting and contamination at room temperature. Other factors such as economic pressure, accelerating production costs, and rapidly advancing technologies make it difficult for manufacturing plants to adapt and evolve according to these growing trends.

This is limiting the sales of suppositories and hampering target market growth to some extent. 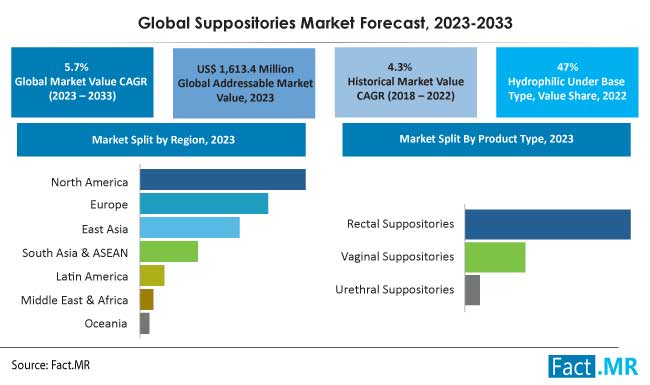 Why is Demand for Suppositories High in the United States?

The market in the U.S. is anticipated to grow at a CAGR of 5.1% during the forecast period. Despite the presence of several emerging and developed countries, the U.S. has captured a prominent share of the global pharmaceutical industry. The country is home to some of the biggest drug-manufacturing companies. In addition, the provision of health insurance policies and reimbursement programs has provided the U.S. population access to the most advanced pharmaceutical products in the world, albeit at a cost.

The aforementioned reasons play a major role in the growing acceptance of various drug dosage forms, thereby increasing the sales of suppositories in the country.

Why is the Market Expected to Be Highly Opportunistic in Germany?

The pharmaceutical industry in Germany is highly diversified and offers a wide range of products related to human medicine. Being a perfect location for research and development, the production and sales of suppositories are high in Germany, which has made it a key contributor to the growth of the suppositories market in Europe.

Growing trends such as demographic change, rising chronic diseases among the elderly population, and increasing emphasis on prevention and self-medication have motivated manufacturers to invest in suppository manufacturing and maintain a prominent position in the pharmaceutical industry.

What Makes Rectal Suppositories Most Preferred?

Rectal suppositories are the most commonly used suppositories for drug delivery. The segment is expected to hold the largest market share of 68.2% in 2023 and exhibit a CAGR of 5.1% during the forecast years 2023-2033.

Drugs administered through this route are absorbed easily and are found to achieve better therapeutic effects over orally administered drugs of similar doses. It has been observed that rectal drug administration is ideally suited for the infant population who is developmentally delayed and rejects other forms of premedication.

These are also generally used for the elderly population who have trouble swallowing tablets and capsules. Rectal suppositories fulfil the care needs of patients who have an 'NPO status' as administering these drugs can be done with minimal discomfort at hospitals.

Why Will Use of Suppositories Increase for Hemorrhoids Treatment?

In terms of application, suppositories for treating hemorrhoids hold a majority of the share in the global market.

Hemorrhoids are commonly occurring benign anorectal diseases widely believed to be caused by chronic constipation. It affects a large population around the world, which represents a major medical and socioeconomic problem. Screening for the early diagnosis and intervention of hemorrhoids using suppositories, especially for risk groups such as the geriatric population, is widely practiced by healthcare professionals.

The above-mentioned utility of suppositories by healthcare professionals to treat chronic constipation disorders will uplift overall product demand over the coming years.

Market players are continuously altering their business strategies to address several challenges faced by them and compete in the dynamic pharmaceutical industry. Adoption of inorganic tactics such as mergers, acquisitions, and collaborations with emerging players will open a plethora of opportunities for dominant players. In addition, investing in R&D for producing new suppositories that can address growing chronic conditions among the population will increase the profitability of market players.

Fact.MR has provided detailed information about the price points of key manufacturers of suppositories positioned across regions, sales growth, production capacity, and speculative technological expansion, in the recently published report.

The global suppositories market stands at US$ 1.61 billion in 2023.

Worldwide demand for suppositories is anticipated to reach US$ 2.8 billion by 2033-end.

North America is the leading suppositories market and accounts for 33.2% market share.