The global unmanned traffic management (UTM) market is expected to expand at an impressive CAGR of around 18% over the next ten years, with drone operators being the largest end users across the world.

Steadily soaring demand is expected for UAVs and autonomous aerial vehicles in context with various applications across multiple sectors, owing to massive surge in air traffic over the assessment period.

Shifting preferences and increasing disposable income will lead to a surge in the number of conventional aircraft, which is likely to contribute heightened demand for UTM through 2031.

Additionally, numerous end-use industries such as e-Commerce, agriculture, and defence have infinite applications of unmanned aerial systems and drones, as these are being recognized as a potential alternate for various applications that could change the conventional way of performance over the coming years.

Further, prior mentioned applications of unmanned aerial vehicles or drones will contribute to air traffic, and require an efficient and safe traffic management system, which eventually propels the appeal for unmanned traffic management equipment over the assessment period.

The foremost objective of the new report by Fact.MR on unmanned traffic management is to pitch insights on the market scenario, demand generators, and technological advancements in this space. The report provides a taxonomy elaborating on key segments.

The report also outlines visionary insights on the dynamics of the market, including the drivers, restraints, opportunities, trends and pricing analysis, along with key success factors. Market trends have been tracked in 20+ high-growth countries, pointing towards countries in North America, Europe, and East Asia holding the bulk of the market share. 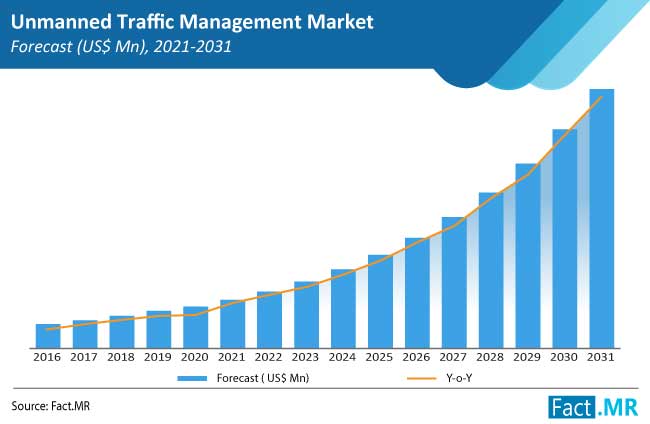 What are the Constraints for Unmanned Traffic Management?

Regional governments have several regulations and certifications regarding UAVs and flying vehicles. Governments across the globe have their measures to regulate air traffic and flying zones, which may potentially restrain demand for unmanned traffic management.

Increasing regulations and severe certifications tend to affect the market adversely, resulting in a fall in demand for UAVs across the globe. Reducing demand for UAVs will leads to decrease in air traffic, and proportionally, unmanned traffic management.

This market is an expensive affair; infrastructure requirement in this service is higher. Severe architecture such as radars and navigation systems are extensively deployed to monitor and manage air traffic. As unmanned traffic management is a technological market, it requires continuous and constant flow of research and innovation. Companies in this market need to spend substantially in order to be competent in the market. 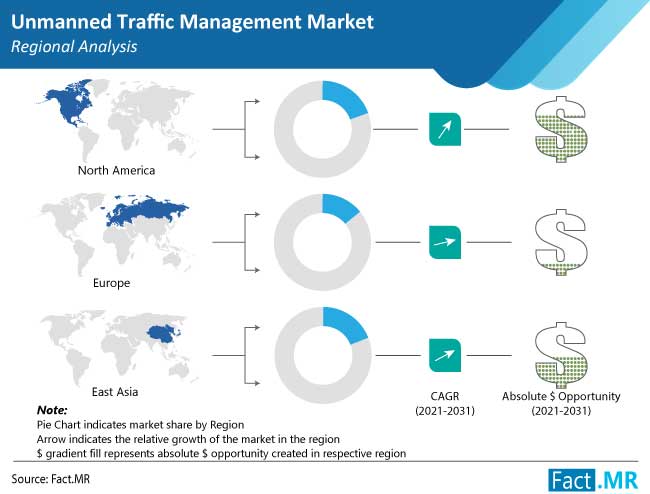 Globally unmanned traffic management exhibits great potential in North America, specifically in the U.S, which accounted for highest demand owing to high penetration of autonomous aerial vehicles and UAVs. Further, the U.S defense department is giving a push towards unmanned aerial vehicles or drones, which has provided impetus to the thriving demand for unmanned traffic management systems.

Further, Europe is looking like the most lucrative market after North America, due to the deployment of unmanned aerial vehicles or drones across multiple sectors and rise in conventional aircraft. Due to this, air traffic is expected to surge exponentially over the assessment period, which eventually contributes to higher demand for UTM services.

However, the market in East Asia is poised to expand at a CAGR of around 17% over the forecast period. China is the most prominent market presumed to push demand for unmanned traffic management, owing to technological advancements and consistent development of infrastructure, which gives an upper edge to the country. This will bolster growth of East Asia as far as unmanned traffic management is concerned.

How Big is the Opportunity in Controlled Airspace?

Numerous development and innovation initiatives are being taken by some prominent players to make their infrastructure robust for controlled airspace, owing to high penetration and applicability across multiple sectors. As such, there remains a huge opportunity for aerial vehicles and drones for controlled unmanned traffic management airspace.

How Has COVID-19 Impacted Demand for Unmanned Traffic Management?

The COVID 19 pandemic has impacted the global economy with a loss of trillions of dollars in just a few months. More than 100 countries either faced full lockdowns or partial ones, and nearly 200 countries were effected with the coronavirus outbreak. This resulted in global disruption of import and export across borders.

However, the scenario for unmanned traffic management is little bit different; the market was not affected so badly like other sectors, because of the applicability aspect.

Three cases where drones are deployed in response to COVID-19

In this environment, modest but progressive tightening of reinsurance capacity that we forecasted at the beginning of the year has been accelerated. It remains to be seen whether the volume of new capital that enters the market between now and the year-end is sufficient to influence market dynamics and improve surveillance, navigation, and communication infrastructure for unmanned traffic management.

Market to register a CAGR close to 18% by value across the 2021-2031 assessment period. Higher penetration in the UAV and drone industry will bolster growth of unmanned traffic management service providers.

The U.S. is expected to hold a pivotal role driving demand for unmanned traffic management. Surge in demand from e-Commerce and agriculture industries is set to be observed across the country.