In addition to the advantages of these slings, rising rate of the elderly population who are more susceptible to urine incontinence symptoms and increasing prevalence of female urine incontinence are factors boosting the sales of transobturator slings.

Urinary incontinence, an undetected condition in which the bladder loses control and causes an involuntary flow of pee, is treated with vaginal slings. Some of the behaviours that can cause urine leakage are coughing, laughing, sneezing, lifting heavy objects, and exercising. Vaginal slings support and hold the urethra and bladder like a hammock to stop leakage.

A common type of surgery performed for such conditions is a vaginal sling surgery, where slings are made from natural or synthetic materials such as cadaver tissues, pig or cow tissues, human tissues, or mesh (tissue slings or synthetic slings).

Furthermore, during the forecast period, the worldwide demand for novel vaginal slings is anticipated to rise due to the rising prevalence of urine incontinence, and technological advancements in vaginal slings. One of the main reasons influencing vaginal sling sales during the projected period is the increased emphasis on minimising maternal death instances and growing healthcare spending power.

As incontinence concerns may emerge during pregnancy and after childbirth, WHO and UNFPA, for instance, have set five essential objectives to minimize unnecessary maternal mortality, which further could support the demand for urethral vaginal slings.

Millions of people around the world experience urinary incontinence, a highly widespread urological illness that is both underreported and underdiagnosed. It harms the mental, emotional, and physical health of the patent.

Women are twice as likely to be affected as men, and the prevalence rises with age. Urinary incontinence may be caused due to various reasons, including urethral sphincters, obesity, urinary tract infections, and neurological abnormalities.

Colposuspension and vaginal mesh were two common but old therapeutic options. However, due to the midurethral sling's reputation as an effective, safe, and efficient procedure, old procedures have been supplanted.

In addition, vaginal sling procedures are gaining popularity because it requires less recovery and operational time. Global manufacturers of vaginal slings are witnessing potential demand opportunities as a result of all these features of the vaginal sling treatment.

What are the Limitations Denting Sales of Vaginal Slings?

The potential risks of vaginal sling procedures, such as urinary tract infections (UTIs), together with the decrease in the number of women seeking medical examination and treatment for urine incontinence as a result of social stigma, and also lack of awareness about the treatment procedures in developing regions, could, however, limit business sales growth. 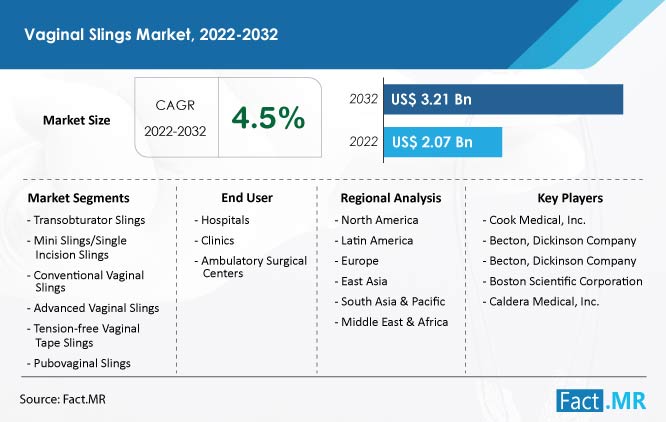 Which Strategies are Followed by Market Newcomers to Achieve High Profits?

A U.S.-based Company Renovia, founded in 2016 is a producer of e-stimulation devices and solutions which focuses on the strengthening of pelvic floor muscles.

The business's solution enables real-time visualisation and treatment of weak pelvic floor muscles. Data management systems and patient-based app technologies are some of the features of the firm's product offerings.

For the treatment of women with stress, mixed, and mild to moderate urinary incontinence, the company offers a leva system and e-stimulation devices, which help to strengthen weak pelvic floor muscles.

Which Regions are Expected to Be Lucrative Markets for Vaginal Sling Treatment Providers?

North America and Europe are expected to hold a dominating position in the global vaginal slings market during the forecast period. This can be attributed to the factors such as the large patient pool and the presence of major manufacturers of vaginal slings.

Furthermore, the rising geriatric population and rising prevalence of chronic diseases such as diabetes and neurological disorders are boosting the demand for vaginal slings in these regions.

Due to the rapidly improving healthcare infrastructure in nations such as India, China, Japan,South Korea, and Malaysia, the Asia Pacific market is expected to rise at an exponential rate. Additionally, it is anticipated that rising investments by top industry players and healthcare providers will boost the local market in the Asia Pacific region.

Demand for vaginal sling procedures in Latin America and the MEA regions is predicted to rise at a steady pace during the projected period.

How are Sales of Vaginal Sling Solutions Evolving in European Countries?

Demand for vaginal sling treatment in European countries such as the U.K., Germany, Span, and France is expected to increase due to the rising prevalence of urinary tract infections among women.

Rising incidence of this disease, along with the development of cutting-edge tools for minimally-invasive surgeries, is likely to increase the demand for vaginal mesh sling procedures in the European region.

Why is the United States Expected a Beneficial Marketplace for Suppliers of Vaginal Slings?

The United States holds a dominating position in the North American vaginal slings market due to the presence of key manufacturers & the rising senior population with urinary disorders, and advanced healthcare facilities.

Thus, all the above-mentioned factors are expected to increase the demand for vaginal sling surgeries in the U.S. during the forecast period.

Why is There High Demand for Vaginal Sling Products from Hospitals?

Vaginal sling surgeries are highly performed in hospitals. This can be attributed to the adoption of highly advanced robot-assisted minimally- invasive surgical equipment.

Governments of several nations across the globe are focusing on advancing their respective healthcare facilities.

Over the coming years, developments such as these are projected to drive the overall market dynamics, together with the gradually rising surgical rate in hospitals.

Top companies are focusing on producing advanced vaginal sling solutions to increase their market position and earn high a revenue share in the vaginal slings market.

The market is segmented based on type, material type, type of incontinence, end user, and region.

The global vaginal slings market is projected to reach US$ 3.21 billion by 2032.

Worldwide demand for vaginal slings is currently valued at US$ 2.07 billion.

*120 figures and 24 tables includes by FactMR