The global forging lubricants market experienced growth at the rate of 1.2% CAGR between 2017 and 2021 to reach a market valuation of US$ 5.8 billion at the end of 2021. Worldwide demand for forging lubricants is predicted to increase at 3.7% CAGR to reach US$ 8.7 Billion by 2032-end.

Consumption of water-based forging lubricants grew 0.5% to reach US$ 764.9 million in 2021. High focus of manufacturers on water-based lubricants is anticipated to add value to the overall market space.

As per detailed market analysis by Fact.MR, a market research and competitive intelligence provider, market value for forging lubricants increase at a CAGR of around 1.2% during the past five years. Developed countries such as the U.S., France, Germany, and Italy held a significant share in the global market.

Defense equipment demand is expanding as governments across the world focus on military modernization in response to rising global security concerns. Global defense expenditure is anticipated to increase rapidly over the next five years due to uncertainties and the continued complexity of the international security situation.

Furthermore, there are signs of restoring sales of automobiles in China, where the government has delayed the implementation of the China 6 emission standard and started providing taxation support to stimulate growth during the fiscal year 2021-2022.

Alongside developed countries, China has remained one of the primary consumers of forging lubricants owing to prime automobile manufacturing bases in the country that require these lubricants for specialized forging operations.

Worldwide demand for forging lubricants, which find usage across diverse end-use verticals, is poised to reach US$ 8.7 billion by 2032 as compared to US$ 5.8 billion at the end of 2021. 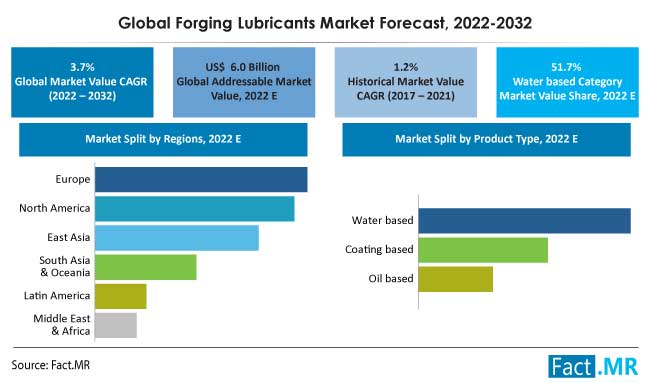 Over the long-run projection period, several factors are anticipated to drive the demand for forging lubricants. Die life has started to exceed previously set numbers. Moreover, in complex dies, a huge volume of raw materials is introduced. As a result of the dies' intricacy, not all areas of the dies are uniformly cooled.

A variety of sophisticated forging dies are being developed to improve the efficiency of parts, resulting in the deposition of materials in complex geometries, again requiring forging lubricants in the process.

Forging machines operate at extremely high temperatures, necessitating the use of forging lubricants that not only maintain the appropriate die temperature but also effectively remove lubricant residue and aid in achieving the desired mould performance.

Additionally, rising technical obligations in the process of forging operations have paved the way for the utilization and integration of advanced forging lubricants.

Owing to the above-mentioned factors, the forging lubricants market is projected to provide an absolute $ opportunity of US$ 2.9 billion during the forecast period of 2022-2032.

Why are Forging Lubricant Suppliers Focusing on the United States?

The U.S. has remained a prominent market for forging lubricant sales and accounted for nearly 89% of North America’s market share in 2021. The market is anticipated to expand at a CAGR of 3% during the forecast period. This is because the U.S. remains one of the major contributors to the automobile and defense manufacturing industries.

The U.S. is one of the largest manufacturers of automobiles, second only to China. Additionally, a plethora of automobile manufacturers has set up their bases in the country to serve the growing demand for the technologically-advanced automobiles with changes in CAFE standards.

Additionally, the U.S. has a strong defense budget and its total defense spending amounted to US$ 733 billion in 2021. This trickled down to an escalation in forging lubricant sales that find usage in forging sophisticated defense equipment and components for aircraft and vehicles.

Based on the above-listed factors, the U.S. is forecasted to remain the epicenter of growth during the forecast period and create an absolute $ opportunity of US$ 536.8 million by 2032.

Why is France a Lucrative Market for Forging Lubricants in Europe?

France is estimated to account for above one-fourth of the European market value in 2022. This is primarily because France has remained the second-largest exporter of aircraft and related aerospace equipment during the past decade.

Owing to the above-mentioned factors, France is poised to account for a sizeable consumption of forging lubricants during the forecast period, and the market is anticipated to expand at a CAGR of around 3% through 2032. It is further estimated to create an absolute $ opportunity of US$ 155.4 million over the next ten years.

Why are Water-based Forging Lubricants the Preferred Choice of End Users?

Owing to the plethora of benefits offered by water-based forging lubricants, they have emerged as the preferred lubricant of choice accounting for over 50% market share in 2021, with the segment anticipated to expand at a CAGR of 4.2%.

As such, water-based forging lubricant demand is poised to remain consistent and create an absolute $ opportunity of US$ 1.7 billion by 2032.

Which process has predominantly been used by end-users of forging lubricants?

Hot forging application consumed over 50% of forging lubricants as of 2021 and is poised to remain the preferred forging type among end users over cold forging application. This is because certain desired benefits and operational characteristics of the end product can only be obtained by hot forging.

Hot forging generally refers to the process of heating a workpiece to roughly 3/4 of its melting temperature. This decreases the flow stress and required energy level to produce metal, helping increase the pace of production. Further, hot forging makes it easier to shape the metal and makes it less prone to fracture.

Cold forging is a manufacturing procedure that increases a metal's strength by strain hardening it at room temperature. The hot forging production technique, on the other hand, prevents materials from strain hardening at high temperatures, resulting in high strength of yields, high ductility, and low hardness.

The hot forging segment is poise to expand at a CAGR of 3.8% and create an absolute $ opportunity of US$ 1.7 billion over the decade.

Currently, the global forging lubricants market is pegged at US$ 6 billion.

Forging lubricant sales are anticipated to increase at a CAGR of 3.7% through 2032.

Capacity expansion and forward contracts with end-use industries to ensure regular sales are being witnessed in this marketplace.

North America is estimated to hold around 24.2% of the global forging lubricants market share by 2032.

*210 figures and 90 tables includes by FactMR