Aviation lubricants to register a CAGR of 5% across the 2021-2031 forecast period. By 2021-end, sales are anticipated to reach US$ 859.8 Mn, following extensive applications across large commercial jets, in the wake of a resumption in passenger air travel. As per the report, preference for semi-synthetic and synthetic oils will be dominant, yielding US$ 900 Mn by 2031.

As per Fact.MR – market research and competitive intelligence provider, during the historic period of 2016 to 2020, registering a CAGR worth 4%. Increased frequency of air traffic in the past few years have led to prolific developments in the global aviation industry, especially with regard to aircraft fleet and airport infrastructure.

During the COVID-19 pandemic, demand for aviation lubricants experienced a major setback, attributed to contractions in the global air travel industry in general. Data from the International Civil Aviation Organization (ICAO) concludes that an overall reduction of 50% in terms of seat offering, 2,699 million reduction in passengers opting for air travel and an approximate loss of US$ 371 billion of gross passenger operating revenues were experienced throughout 2020.

As a result, maintenance cycles of aircrafts reduced significantly, leading to reduced demand for aviation lubricants. However, with the onset of 2021, a gradual resurgence is expected, with lockdowns lifting across most parts of the world. Maximum demand push is anticipated from China, clocking a CAGR of 5%, attributed to the rapid pace of airport infrastructure revamps. From 2021 to 2031, the overall market is likely to reach US$ 1.4 Bn in value terms, expanding 1.6x.

Aviation Lubricants Sales to Surge on the back of Surging Air Traffic?

Rising demand for air travel and cargo activities are most likely to create a sufficient surge in demand for aviation lubricants. According to ICAO’s preliminary compilation of annual global statistics, the total number of passengers carried on scheduled services rose to 4.3 billion in 2018, which is 6.4 percent higher than the previous year, while the number of departures reached 37.8 million in 2018, a 3.5 percent increase.

Furthermore, quick urbanization and industrialization have witnessed the surge in air travel in the past few years and anticipate following the same trend during the forecast period. Mounting interest of governments in advancing policies regarding open skies, immigration, and visa are projected to facilitate numerous market opportunities for aviation lubricants.

Countries such as India and China have taken such initiatives, which are primarily government-driven, to boost air travel, which is likely to surge the demand for aviation lubricants. The utilization of aviation lubricants for commercial, military, and general applications is more likely to create significant demand for manufacturers.

Burgeoning Airport Infrastructure Investments to Act as a Beacon for Aviation Lubricants Expansion?

A global increase in population is creating demand for additional airports to facilitate ease of air transportation, which drives the market growth. This is leading to large investments in the aviation industry in order to cater to the needs of new airports, especially in developing countries/regions. For instance, the U.S. government is in the limelight for its increasing investments towards expanding old airports and developing new ones to handle this increase in air traffic and air freight transport.

In April 2021, the U.S. Government announced its plans to invest $25 billion into Airport Infrastructure. U.S President Joseph Biden introduced a new American Jobs Plan containing $25 billion in funding to support and develop its airport infrastructure. This plan would help the industry continue to focus on safe and efficient air travel by supporting terminal renovations and multimodal connections that would provide affordable access for passengers and workers. With the focus on modernizing America’s airport infrastructure, the demand for aviation lubricants is projected to bolster across the country.

In addition to this, many developing countries are working on opening new airports to facilitate air transportation within and across countries. For instance, as a part of its vision to reach a US$ 5 trillion economy by end of 2025, India is planning to open additional 100 airports by the end of 2024. Considering the aforementioned factors, the demand for aviation lubricants is projected to expand at a significant rate.

How Opportunistic will the Market for Aviation Lubricants be across the U.S?

According to Fact.MR, the North American region, specifically the U.S., accounts for the highest demand for aviation lubricants due to the presence of a large number of manufacturers and consumers. This is majorly attributed to the surging volume of air traffic in recent years.

According to the U.S Department of Transportation, around 32 million people were transported between the U.S and rest of the world, both by domestic and international carriers, as of March 2021. Likewise, 11 million tons of freight were carried to and from the country in the past year, representing a 1% increase from the preceding 12-month period.

Flourishing Aviation Infrastructure to Broaden Outreach of Lubricants in China?

The Chinese market remains the growth epicenter for aviation lubricants, amid the government’s strong push towards developing urbanization and industrialization, which will lead to giving a positive impact on air travel, will directly influence the aviation lubricants sales.

As per government estimates, since China unveiled its 14th Five Year Plan in 2021, one of the core strategies is to augment the country’s civil aviation sector. It is expected that China will inaugurate 30 new civil airports, increasing air traffic handling capacity by 43% to 2 billion passenger trips. As of the conclusion of the 13th Five Year Plan (2016-20), a total of 241 certificated airports with a capacity to transport 1.4 billion passengers was recorded. 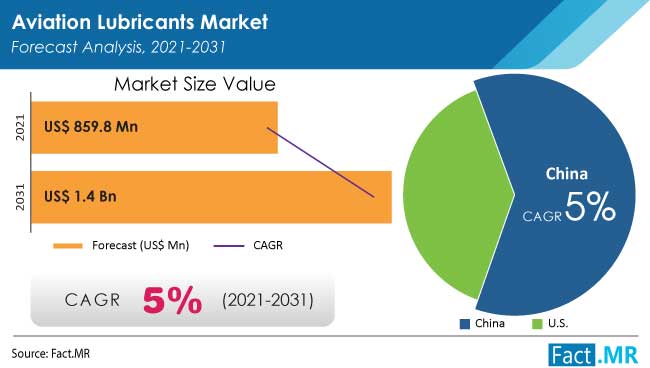 Why is Demand for Semi-Synthetic & Synthetic Oils Increasing?

According to Fact.MR, demand for semi-synthetic & synthetic oils is likely to surpass the US$ 900 Mn mark by the end of 2031. This segment accounts for half of the aviation lubricants demand globally.

With global incidence of air travel increasing at an exponential rate, demand for high-quality aircraft maintenance, particularly for large commercial airliners, has kept pace. Rising concerns regarding metal fatigue and wear & tear is prompting high usage of lubricants. A CAGR worth 6% is anticipated for this segment until 2031.

Front Runners are emphasizing capacity enhancements and global footprint expansion to leverage lucrative prospects in developing economies. Partner training and development programs are being undertaken by multinationals to ensure the quality and consistency of services.

How much is the market for aviation lubricants worth?

What is the projected growth rate for the market for aviation lubricants?

What is the projected market value of aviation lubricants by 2031?

Global market for aviation lubricants is envisaged to account for US$ 1.6 Bn by 2031.

What was the last 5 years CAGR for the aviation lubricants industry?

Which are some of the lucrative markets for aviation lubricants?

China and the U.S are considered to be the most lucrative market, collectively expected to register a CAGR of 10% until 2031

What is currently driving demand for aviation lubricants?

Which aircraft category will remain the largest aviation lubricants consumer?

By type, which are the most sought after aviation lubricants?

Semi-synthetic & synthetic aviation lubricants will remain most preferred, likely to surpass US$ 900 Mn by 2031