Sales of trail camera accounted for less than 2.8% of the global camera market at the end of 2021.

The demand for trail cameras in the end-use sectors has also increased due to the historically observed steadily expanding participation of women in hunting. Leading firms are expanding their global base to increase their market share and market reach while concentrating on producing higher quality, more effective, and better camera range for trail cameras.

The expansion of retail chains, both physical and digital, in accordance with emerging product lines and product portfolios of existing players, will have an impact on the trail camera industry. Trail cameras are only one example of the hunting equipment sector's and modern trade channel's rapid size expansion.

Over the 2017-2021 historical period, the global trail camera market registered a CAGR of 2.4%, and according to the Fact.MR, a market research and competitive intelligence provider, the market is projected to exhibit growth at 3.9% CAGR between 2022 and 2032. 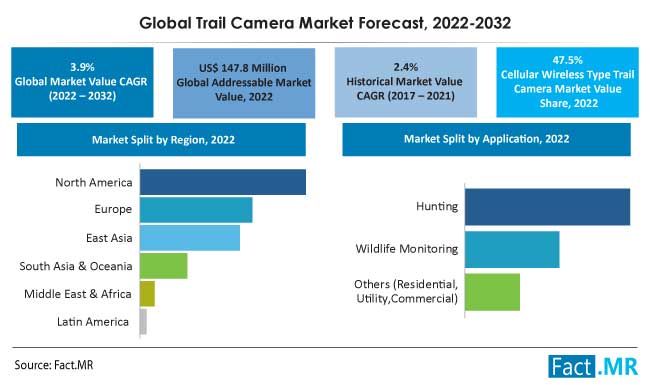 Market share analysis of trail cameras based on region and application is provided in a nutshell in the above image. Under the application segment, the hunting sub-segment dominates with 52.6% market share in 2022.

In this technologically advanced age, none of the industries are left untouched, including the trail cameras market. Earlier, the trial cameras used to be a two-piece device that projected an infrared beam to its receiver. The products have now been modified into more user-friendly versions with enhanced picture quality, internet access, improved battery life, and increased connectivity with cellular phones.

The trail cameras are now equipped with increased flash range and compatibility with other widely used devices. They are now available with protective covers and are thus, capable of withstanding harsh climatic conditions.

Trail cameras have evolved long from where they started and are now gaining a customer base and penetration in wildlife enthusiasts and the middle-class population for outdoor surveillance systems. This transformation of trail cameras into a technologically advanced product is fueling the demand for trail cameras.

Management of wildlife and its biodiversity has always been a challenging for humankind and also responsibility. With the burgeoning population and its diverse requirements, the influence on the wilderness areas and the animals found that they have multiplied manifold leading to a tremendous burden on the natural resources to the extent that their conservation has become a very challenging task.

Wildlife sanctuary monitoring is necessary for maintaining a track of animal movement patterns, population demographics, habitat utilization, hunting and poaching incidents, and breakouts. Trail cameras have been widely used equipment for tracking and monitoring wildlife and studying their behavioral patterns for the concerned professionals.

What Do Trail Camera Manufacturers Need to Watch Out for?

“Availability of Alternate Products to Hinder the Market Growth”

Even though trail cameras have earned considerable traction among the population, various products are preferred by customers for attaining better results. Amidst this new technological era, a new product, Blink, from Immedia Semiconductor Incorporated, has been gaining consumer preference over trail cameras for security and surveillance purposes.

In comparison to the conventional trail cameras, this product is more sophisticated, more user-friendly with better features, and more economical. Apart from Blink, there is a significant population using smartphones that can at times be employed in case of emergency or one-time utility of a trail camera, thus, obstructing the opportunities for the market.

A trail camera is a popular product among the communities in the regions that are near a wildlife facility or forests, for wildlife hunting or outdoor monitoring, however, in remote areas, CCTV cameras are still overpowering trail cameras in every aspect for outdoor surveillance and other requirements.

The U.S. Department of the Interior has released a new report from the United States. Its Fish and Wildlife Service observed that 101.6 million Americans (40% of the U.S. population over the age of 16) are involved in wildlife-related activities such as wildlife watching and hunting each year.

With approximately 121,000 units of hunting products sold in North America in 2020, market is projected to grow at a positive CAGR and capture a revenue share of 25.1% in 2027. Also, wildlife monitoring sales are expected to register a growth rate of over 4% during the forecast period.

Increased recreational and animal monitoring and research activities in the region have increased the demand for trail camera products. The US government has created the Science Support Partnership (SSP) program.

The Fish and Wildlife Service and geological surveys to obtain the critical information needed to effectively manage the nation's natural resources have created a huge demand for advanced cameras with excellent night vision quality, thereby improving trail visibility. This has spurred demand for cameras.

Why is the U.K. Trail Camera Market Expected to Be Highly Lucrative?

According to the British Shooting Conservation Society (BASC), more than 1 million people participate in shooting, including shooting, hunting, stalking, skeet shooting, and target shooting each year. All of these require cameras that are automatically triggered by changes in activity in the environment. This allows users to track animals without their presence.

Agriculture is the foundation of the UK's largest manufacturing sector, food, and beverages, and it contributes largely to the UK economy. This large agricultural industry is always looking for suitable surveillance cameras. The adoption of wildlife cameras is increasing among farm owners. These cameras can monitor potential threats and take appropriate precautions. According to Fact.MR analysis, the UK trail camera market is expected to reach nearly US$ 6.3 Million by 2022

What will be the Scenario of Trail Camera Market Growth be led by Hunting?

To the early human, hunting was a necessity. It provided them from food, clothing to skins and material for tools by utilization of bones and horns. In modern times, hunting is no longer a necessity but a recreational activity and a sport.

Though it seems to be a polarizing subject among many, the popularity of hunting as a sport has increased noticeably within the action sports communities. According to a new five-year report in America over a hundred million people were involved in hunting, fishing, and wildlife activities.

For a couple of decades, the participation of women in hunting has also risen dramatically in several regions in the United States. In the past few years, women constituted nearly a quarter of the total hunter students.

Films, media, and communication have also contributed significantly to building the popularity of the sport. Some of the movies have piqued younger women’s interest highly in archery, including hunting, such as The Hunger Games trilogy. With such a growth in the number of hunting enthusiasts, the popularity of trail cameras is growing at a rapid pace. The growth of trail camera due to hunting sector is expected to reach US$ 77.8 million by 2022 end.

Eminent players of trail camera are Bushnell Core DS Low Glow, Bushnell Trophy, Camera Essential E3, Spy Point Solar Dark. The key manufacturers of trail camera products are employing the latest technologies and optimization systems for better utilization across diverse end-use applications. Key manufacturers are focusing on developing new product designs that ensure an increase in the efficiency and safety. Additionally, leading manufacturers are trying to apply different strategies such as product launches, partnerships, and others or techniques such as a blend of organic and inorganic promotional ways to increase the sales of the product.

The global trail camera market is expected to reach valuation of US$ 147.8 million in 2022.

Worldwide demand for trail cameras is anticipated to reach US$ 216.6 million by 2032-end.

Wireless trail cameras accounted for 74.5% share of global sales in 2021.

*237 figures and 98 tables includes by FactMR