The market is bifurcated into cameras and accessories based on products. The demand for wearable cameras is expected to rise at the highest CAGR over the forecast period attributed to their operational effectiveness, such as the GPS integration and improved video stabilization, and their capacity to record real-life experiences while enhancing the user experience.

A wearable camera is a life-logging device that records behavioral information such as user-centered data, scene analysis, interaction recognition, and physical activity classification. It typically comes with cutting-edge components such as images and a variety of sensors, including microphones and inertial measurement units. It is now widely favored over manual cameras since it has a long battery life and the capacity to automatically record a sizable number of passive photographs without human input.

The hands-free recording and capturing of moments linked to sports, adventures, events, and any tourism activity is possible with the wearable camera. It gives the ability to keep the hands and vision free to focus on the task at hand to capture the moments. It can be viewed as a smartphone camera's extension.

The market will be driven by the wearable camera's enhanced quality and durability as well as the rising demand for features such as hands-free operation and amazing experiences. The increased accessibility of the internet and the use of various social media platforms and apps are projected to increase demand.

In addition, the need for wearable cameras is expanding due to the increasing prevalence of chronic diseases and the need to record health-related behaviors and disease risk factors such as nutrition, exercise, and sedentary habits. Additionally, the information gathered by these cameras can be used to provide useful context and comprehend how chronic diseases are managed by themselves. Surgeons use them to film the surgery process for subsequent review.

There are numerous varieties of wearable cameras on the market, and each has its special benefits and drawbacks. Due to their tiny size and lightweight, mini portable cameras are becoming more popular among consumers.

Law enforcement officials also use wearable cameras to capture any events they come into while on duty, including traffic stops, sobriety tests, and interviews, among other things. Action cameras are seeing a surge in demand due to social media's quickly expanding influence. Sports people are particularly fond of action cameras since they produce excellent videos of outdoor adventures.

Drivers widely use dash cams to record footage of traffic accidents, ensuring they have documentation in case something goes wrong. People are increasingly inclined to buy wearable cameras as they become more conscious of their right to security and privacy. Hence, wearable cameras can be used for both non-commercial and commercial reasons.

How is Social Media Transforming the Wearable Cameras Space?

Social media has changed the way we live our lives and in this digital age documenting and sharing one’s life experiences is an important aspect of one’s social presence and personality. People are more involved in adventure and sports activity than ever before owing to a hike in awareness of fitness and health.

Increasing need for documentation and digitization of these experiences for medical and social purposes is expected to bolster shipments of wearable cameras across the world over the coming years. Wearable streaming cameras are anticipated to be highly popular among younger people over the coming years as streaming live events of one’s life becomes a mainstream trend.

The industry is anticipated to rise throughout the forecast period due to the quick technological innovations in the field of wearable camera technology. People are also very interested in sharing their lives and memorable events online thanks to the rise of social media platforms.

Wearable cameras are gaining traction in the broadcasting industry since they provide first-person point-of-view shots, which allow autobiographical documentation of daily life and present a chance for live blogging fans. The popularity of wearable cameras is also growing as a result of additional advantages, such as their small, durable structures that are appropriate for all terrains, self-adjusting focus, automated illumination adjustment, ample storage, and exceptional portability with hands-free recording capability.

What Could Slow Down Wearable Cameras Market Evolution?

“Social Issues Regarding Use of Wearable Cameras” 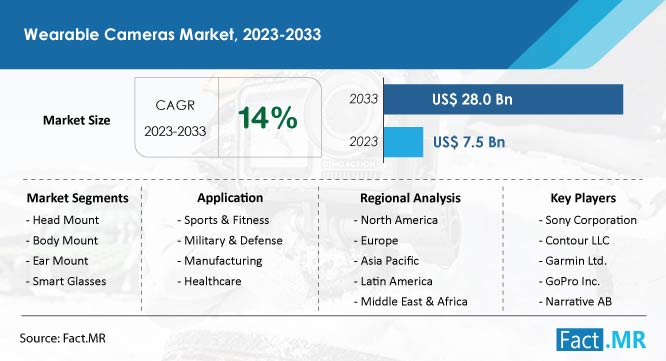 What is Augmenting Future Scope for New Market Players in This Industry?

New market players are focusing on research and development of new and innovative wearable cameras with advanced features. The use of artificial intelligence and automation is expected to be a popular trend in the marketplace going forward.

Some other start-ups are revolutionizing live sports broadcasting With the help of cameras.

Which Region is Considered Profitable for Wearable Camera Suppliers?

North America accounts for 50% share of the global market. Wearable wireless cameras are being mounted on police personnel to provide better transparency and this is expected to drive market growth in North America. An increasing number of people taking part in sports owing to high awareness of fitness and health is expected to favor market growth.

High disposable income coupled with the aforementioned factors makes the region a highly opportune market for many market players in the industry.

Why is the U.S. Set to Be a Highly Lucrative Market for Wearable Camera Producers?

“Rapid Adoption of Novel Camera Technologies in the U.S.”

What is the Market Outlook for Wearable Cameras in Germany?

The market in Germany is predicted to experience strong growth because of increasing tourism, the presence of top wearable camera manufacturers, the growing popularity of adventure activities, and the easy availability of Internet connectivity. Wearable cameras are being used more widely as a result of their capacity to record and share real-time living events.

What are the Prospects for Wearable Camera Sales in Japan?

Growing demand for wearable cameras from various end-use sectors, a large consumer base for advanced wearable items, expanding electronics industry, and the accessibility of a broad range of products from key players are the factors contributing to market growth. The increasing adoption of wearable cameras for commercial photography by professional photographers is anticipated to fuel market expansion in Japan over the forecast period.

Which Mount Type is Preferred for Wearable Cameras?

By type, the market is segmented into the head mount, body mount, ear mount, and smart glasses. Head-mounted wearable cameras account for 60% share of the global market owing to high adoption in adventure sports. The increasing use of head mount cameras in sports such as Formula 1, Moto GP, and cycling is expected to drive popularity over the coming years.

Increasing demand from consumers practicing adventure sports and rising demand for documentation on social media are other factors expected to drive sales of head-mounted wearable cameras. The increasing scope of application of head-mounted wearable cameras in the healthcare industry is also expected to drive overall market potential over the next ten years. Body-mounted cameras are anticipated to witness a steady hike in demand owing to the increasing scope of application in the entertainment industry.

Which Application is Forecast to Gain the Highest Market Share?

The market is classified into sports & fitness, military & defense, manufacturing, healthcare, and others based on application. Currently, sports & fitness applications hold for 50% share of the global market. The use of wearable cameras in the sports and fitness sector is fueled by the expanding use of connected wearables, the increase in extreme sports competitions, and the trend of sharing content on social networking websites.

Wearable cameras are widely used by fans of extreme sports such as skydivers and scuba divers to easily record the full experience. In addition, consumers are spending more money on wearable cameras as sports and adventure activities such as hiking and river rafting gain popularity. These elements are anticipated to have a favorable effect on market growth during the forecast period.

Individuals’ growing desire to measure their fitness and digitize their medical records driving the demand for wearable cameras in the sports and fitness sector. Through the use of image processing techniques, a wearable camera integrated with other software and hardware may ascertain nutritional information and classify various food types.

Broadcasting studios are using these wearable cameras more extensively to stream live sporting events from different perspectives of the athletes on the field, which is increasing demand for these cameras because viewers enjoy the photos and videos taken from various angles.

Sales of wearable cameras are set to reach a market valuation of US$ 28 billion by 2033.

Currently, North America accounts for 50% share of the global market.