As per the Fact.MR’s industry research on anti-settling agents, historically, from 2016 to 2020, market value increased at around 2.9% CAGR. The U.S, China, India, Germany, and GCC Countries held significant share in the global market.

With increasing paint consumption and rising construction projects, the market for anti-settling agents is forecast to expand at a moderate CAGR of 4.2% over the next ten years.

How is Growing Urbanization Triggering Demand for Anti-Settling Agents?

Anti-settling agents have found their way into many end-use applications. Lately, due to rapid urbanization and development in emerging economies, these substances have witnessed huge demand from the construction & building industry.

Anti-settling agent manufacturers across the globe have been focusing on developing organic versions by allocating abundant resources towards product innovation and development. They are also setting up sustainable production plants and partnering with other giants to come up with initiatives such as advancing production plants to achieve lower emissions.

Also, usage of rheology modifiers in various forms and nature in widespread end-use applications has also lead the market to witness steady growth.

Market players must take nature and use-case systems as the base for expanding their production capacities. As these factors hold high deciding potential for the applications anti-settling agents go into, it acts as a key opportunity for capitalizing on the swelling demand for anti-settling agents from end-use industries.

Will Demand for Anti-Settling Agents Be Impacted Due to Companies’ Stance towards Eco-friendly Products?

The foremost pointer promoting the eco-friendly behaviour of manufacturers is self-driven motto to make the earth pollution-free. Though there exist only a few regulations set by governing bodies, this could lead to huge inclination and likeliness of all governing bodies to pass bills and implement more regulations. Many manufacturers, irrespective of the products being produced, are focussing on becoming environmental friendly.

Though it is less likely to expect the same effectiveness in eco-products, abundant resource allocation would address the hurdle and project a positive pathway. Also, with growing conversion of production units from conventional to lessen greenhouse gas emission, the result is set to further draft the market to be driven only on a positive note.

What are the Restraints Being Faced by Anti-Settling Agent Suppliers?

Fluctuation in raw materials prices is the foremost factor hindering future market growth. As there are numerous raw materials being used for manufacturing anti-settling agents, fluctuation in their prices add up to the total production cost, and thereby market prices. However, increasing of supply chain resources by many raw material providers is set to manage factor to some extent.

Also, there exists a substantial demand-supply gap in raw material procurement owing to the same factor. But these factors are all set to be addressed by strategies being planned by biggies supplying raw material over the coming years.

To overcome various challenges, manufacturers have offered their R&D teams to work exclusive and extensively on alternate raw materials with higher or similar properties to determine the extent to which dependency on conventional raw materials is executed.

Which Regions are Considered Lucrative Markets for Anti-Settling Agents Business?

East Asia and Europe are expected to account for over 48% of anti-settling agent demand throughout the assessment period. In 2020, demand in Germany grew 2% year-on-year, buckling initial sceptical thoughts of market performance during a global pandemic. Across Germany, total demand for anti-settling agents reached 2 KT in 2020.

East Asia is another one region that offers a huge pool of opportunities for anti-settling agent manufacturers. The market in the region is flooded with a number of small players along with numerous end-use industries. The region is set to perform well and account for over 1/4 of the global market share by 2031.

Why is the U.S. a Cluster for Consumption of Anti-Settling Agents?

Currently, the U.S. accounts for 84% of overall demand in North America. This is attributed to the use of the material by industries in numerous use cases.

The U.S. represents huge opportunities accounting for 15% of global anti-settling agent demand in 2020.

Rising construction projects and renovation of existing buildings has remained the key. The construction market is expected to grow 16% to reach US$ 1,515 Bn in 2021 and end up at US$ 1,819 Bn by 2025.

The whole scenario of the construction sector in the nation is set to drive the market for anti-settling agents rapidly with no restraining factors.

How is Demand for Anti-Settling Agents Faring across Emerging Markets?

Japan: Similar to the U.S., Japan has been a potential country for anti-settling agent consumption across various use cases.  Paint and construction industries have remained the driving forces. Organic anti-settling agents have occupied a huge place in the country’s contribution, with overall demand reaching 5.3 KT in 2021.

China: As the country is well-known for its technologically advanced resources along with low labour costs, this opens avenues for high anti-settling agent consumption. With increasing number of construction projects and a number of paint manufacturers, the nation is set to drive demand over the coming years.

India: India is also among the top emerging nations with numerous upcoming construction projects. The nation is set to account over 40% of South Asia & Oceania demand by the end of the forecast period. The country also performed explicitly over the historical period at a CAGR of 4%.

Russia: Russia is set to be a driving force of the European region by accounting over 20% demand by 2021. The market in the country is highly driven by the use of anti-settling agents in cement slurry stabilization along use in other niche applications. The country is set to project growth at a moderate CAGR of 4.3%.

Germany is among the top countries driving the European market for anti-settling agents. The country has numerous avenues from various end-use industries; however, the paint and construction industry is set to be the front-facing factor.

The country is set to project growth of both, the paint and construction sectors at a CAGR of 4%. Germany performed explicitly over the historical period as well, and showcased sizeable dollar opportunity during 2016-2020. With its pace of development, the country is anticipated to portray growth at a CAGR of 4.7% and reach US$ 11 Mn by 2031.

Why are Mixed Nature Anti-Settling Agents Highly Demanded across the World?

Mixed nature anti-settling agents are anticipated to account for a huge chunk in the global market owing to many factors. The foremost reason being sole dependency on demand based on type and nature of use-case system.

Why Do Anti-Settling Agents for Aqueous Use-case Systems Hold the Largest Share?

Revenue from anti-settling agents used in aqueous use-case systems is expected to rise at a CAGR of 4.5%. The category serves paints and many other applications where the system is in aqueous form. The category is set to contribute a whopping share of 66% by the end of 2031. 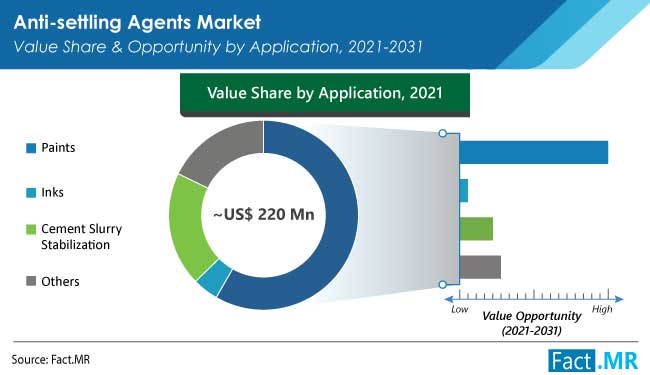 How Has COVID-19 Impacted Revenue Generation from Anti-Settling Agents?

COVID-19 induced a substantial dampening force in the sales of anti-settling agents, as production was affected due to shutting down of manufacturing units. The pandemic also disrupted the market from the demand side, owing to closure of end-use industry plants.

However, the market got back on track post lockdowns, and showed a slight positive growth of 2% in 2020 with respect to previous projections.

Majority companies discussed in the report have focused on various organic and inorganic strategies to impart delivery focus, portfolio expansion and brand development.

Similarly, recent developments related to companies offering anti-settling agents have been tracked by the Fact.MR team, which are listed in the full report.

How much is the global anti-settling agents market worth currently?

The global anti-settling agents market is worth more than US$ 218 Mn at present.

What is the market share of top 5 manufacturers of anti-settling agents?

What is the sales forecast for anti-settling agents for the coming years?

What was the last 5 year’s market CAGR for anti-settling agents?

Which are the top 5 countries driving demand for anti-settling agents?

What is a key trend shaping the growth of the market for anti-settling agents?

Focus of manufacturers on including enhanced silica to preserve color integrity of coatings along with rheology modification are key trends shaping market growth.

What is majorly driving demand for anti-settling agents?

Increasing inclination of end users to alter rheological properties of paints and coatings is driving demand.

What do statistics for India and Australia reveal?

The market in India and Australia is set to expand at over 6% CAGR, with both countries together accounting for over 50% share in the South Asia & Oceania market.

What is the scenario of the market in North America for anti-settling agents?

North America accounted for over 18% of global anti-settling agents demand in 2020.

At what percentage is sales of anti-settling agents expected to register growth in South Asia & Oceania?

The South Asia & Oceania market for anti-settling agents is projected to expand at a CAGR of 5.2% through 2031.

Which countries are key producers of anti-settling agents?

China, the U.S., and Germany are key producers of anti-settling agents.

The Retinyl linoleate market is expected to witness steady growth throughout 2021-2031. The growing ...

The surgical glue market to witness steady growth by 2031. Healthcare and pharmaceuticals sector is ...

The chelate fertilizers market is estimated to expand at a moderate CAGR by 2029. Positive governmen...

Magnesium Nitrate Hexahydrate Market value is expected to grow at a CAGR of 3.8% with reaching US$ 8...