Consumption of natural gelling oil agents, in terms of volume, stood at around 1,065 tons in 2021, accounting for around 7% of total gelling agents volume consumption, which is projected to reach at 1,852 tons by 2032-end.

Natural gelling agent application in food & beverages such as confections, fruit fillings, jams, and jellies has increased over the past decade, and the same is projected over the forecast period. For instance, as per projections, rise in awareness regarding the ill-effects of artificial agents and increased use case of naturally derived ingredients are poised to drive global market value over next decade.

Natural gelling agent application in the production of food & beverage products accounted for the highest market share, which is mainly attributed to the rise in awareness among consumers regarding the use of naturally derived ingredients in packaged foods.

In addition, there has been a massive shift in consumer preference with people seeking products that have no ill-effects on their health. Since artificial gelling agents are attributed to various health issues, preference for cosmetics and food products inculcated with natural gelling agents has emerged.

Which Properties of Natural Gelling Agents are Majorly Driving Demand?

Over the past half-decade, there has been a sizeable increase in the number of health-conscious consumers who prefer products made from natural ingredients such as pectin, xanthan gum, and gelatin. These natural and biodegradable-extracted components are free from any chemical reactions, and thus, hold an upper edge in the market for their use.

Further, natural gelling agents can be used in varied end uses such as food & beverages and personal care. For instance, gelatin is a natural ingredient that comes equipped with healthy attributes, and is being widely used in personal care products such as moisturizers, creams, shampoos, and lotions.

On the other hand, gelatin is also used in desserts, which can mainly be attributed to its coating, foaming, and stabilizing properties. Gelatin also enhances the overall texture of dairy products by providing consistency to the texture.

Attributed to the discussed factors, natural gelling agents market value is projected to stand at US$ 6.33 Bn by the end of 2032. 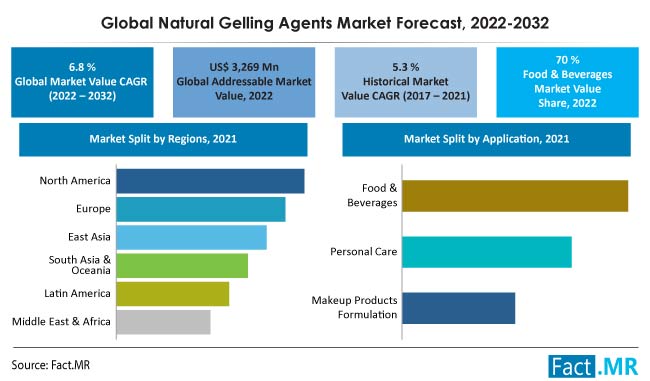 Which Regional Market is Set to Be Lucrative for Manufacturers of Natural Gelling Agents?

Europe is amongst the leading producers of various personal care products, with the skin care segment currently being valued at around US$ 25 Bn. This is mainly attributed to the presence of some 100+ personal care product manufacturers in the region. Additionally, European companies spend relatively high on R&D to provide innovative products and gain trust among consumers.

Further, the number of health-conscious consumers opting for products with natural ingredients in Europe has increased at a rapid pace. Thus manufacturers are relying more on natural gelling oil agents such as xanthan gum, pectin, and gelatin to produce cosmetics and food & beverage products.

Moreover, attributed to high per capita GDP of countries in Europe, consumers in the region spend relatively more on cosmetic products, making it one of the most lucrative regional markets for the sales of personal care products containing the best natural gelling agents.

As such, Europe is anticipated to provide a high absolute dollar opportunity worth US$ 588 Mn over the forecast period.

Which Other Market Should Natural Gelling Agent Suppliers Target?

Asia Pacific is poised to be the most lucrative region for the sales of natural gelling agents. This is mainly attributed to the rise in the consumption of packaged food along with growing demand for various personal care products. Growth in disposable income coupled with sizeable number of young population in the region has been bolstering demand for natural gelling agents.

Additionally, over the past half-decade, participation of women in the workforce has increased considerably. For instance, in Malaysia, participation of the female population is around 46%, thus helping the personal care segment to grow.

Attributed to the above-discussed factors, the Asia Pacific natural gelling agents market is poised to expand at a high CAGR of around 9.2% through 2032.

Which Product Type is Projected to be Consumed More?

“Use of Gelatin as Natural Gelling Agent to Remain Prominent”

Gelatin use as a natural gelling agent is poised account for a majority of the market share as it contains amino acid glycine, which is particularly important for health. Various research studies show that gelatin has been identified as an important substance for treating bone and joint problems such as osteoarthritis.

Additionally, extensive use of gelatin in skin and hair care products has driven its consumption in the personal care industry. Also, today, the trend of packaged food is prominent, especially in high-growth regions of Asia Pacific. Since, gelatin find extensive use case in the production of various food and beverage products, its demand is poised to grow multi-fold over the forecast period.

Thus, attributed to the application of gelatin in various use cases, the segment is projected to account for around 50% market share by 2032, while expanding at a CAGR of around 4.5% within the same timeframe.

Which Application is Projected to Provide High Absolute Dollar Opportunity?

Natural gelling agent application in food & beverages is poised to provide high absolute dollar opportunity owing to its high use in the production of packaged food products such as marshmallows, jellies, fruit snacks, and many more.

Since packaged food consumption has gained traction over the past half-decade, mainly attributed to high-paced lifestyle along with rise in income levels, natural gelling agent usage is also projected to rise over the coming years.

Natural gelling agent application in food & beverages is poised to provide a high absolute dollar opportunity worth US$ 2 Bn over the forecast period of 2022-2032.

What is the current worth of the natural gelling agents market?

Currently, the global natural gelling agents market size is valued at US$ 3.07 Bn.

At what rate is the demand for natural gelling agents expected to increase?

Natural gelling agent consumption value is expected to rise at a CAGR of around 6.8% during the period of 2022-2032.

How has the market performed over the past half-decade?

What are the key trends in this market?

Key manufacturers of natural gelling agents can be seen mainly involved in diversifying their product portfolios and investing in the development of eco-friendly products.

Which are the prominent companies manufacturing natural gelling agents?

What outlook does the China natural gelling agents market provide?

China is estimated to hold around 13% share of the global natural gelling agents market value by 2032.