Matting agents are additives that help paints and coatings function better. They make a surface that is micro-rough. This makes it easier to diffusely reflect incident light, giving it a low-gloss appearance. The particles are spread uniformly throughout the film.

The global matting agents market is expected to create an absolute dollar opportunity of US$ 191.7 million from 2022 to 2032.

According to Fact.MR- market research and competitive intelligence provider- demand for matting agents rose at a CAGR of 3% from 2017 to 2021.

Wax-based matting agents are made of polypropylene and polyethylene compounds. Matting agent coatings improve the antireflective coating qualities of finished items. Anti-corrosive agents provide heat and corrosion resistance. Producers of matting agents are primarily concerned with reducing the amount of organic solvent in paint and coatings.

The automotive industry was a pioneer in the application of increasingly innovative coatings. Matte paint finishes, which are known for their flat, non-reflective looks and sandy, gritty textures, have become a popular aspect of the automobile scene.

Matting agents, when used in a coating, support the diffusion of light in a specified sequence, resulting in a beautiful, noble-looking matted surface. They improve the haptic properties of the surface and give it a smooth feel. As a result, the growing importance of matte-finished items among customers is expected to increase demand for matting agents over the coming years. 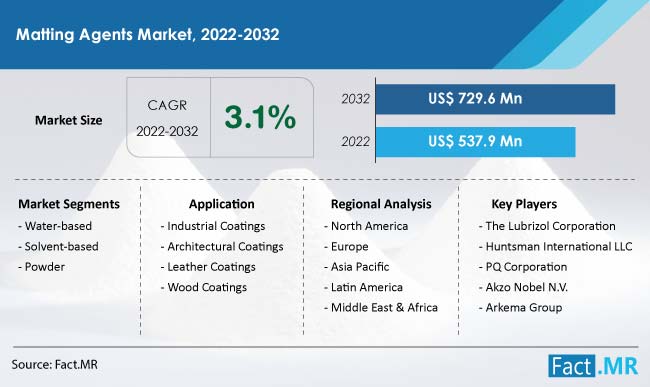 Which Recent Trends are Paving the Growth Path for Matting Agent Manufacturers?

UV cure coatings have seen a substantial increase in demand in recent years. Cycle times, cost efficiency, and emissions of volatile organic compounds are all important considerations when selecting coatings for any application (VOC).

Diatomaceous earth, a naturally existing element, is gaining popularity as a matting agent base material. Diatomaceous earth is used in paints and coatings formulas to help lower the overall cost of the product. It also contributes to a 30% reduction in synthetic silica content.

Use of diatomaceous earth in the production of matting agents aids the development of a low-cost, environmentally friendly alternative to its counterparts. These market dynamics are providing excellent opportunities for matting agent providers.

Furthermore, the cost of matte finish coatings is higher than that of normal coatings, limiting the growth of the matting agents market.

Lack of raw material demand, strict regulatory environmental laws on end-use sectors, and supply due to price tightness and volatility will all represent substantial challenges to the market growth.

Market growth is being hampered by high costs connected with research and development capabilities, growing import and export tariffs, and rigorous global trade prohibitions. The widespread availability of substitutes is hampering the sales of matting agents.

Environmental standards are a significant consideration for paint and coatings formulators. Regulatory concerns are quite important when choosing a product. The solvent-based method utilized to make a matting agent causes a lot of volatile organic compounds to be released.

These chemicals are hazardous to human health as well as the environment. It can irritate the eyes, nose, and throat, as well as induce migraines, lack of coordination, nausea, and a variety of other health problems.

In addition, the lack of an evaporation process and the existence of large solid coarse particles are expected to stymie the market expansion over the forecast period. The lowered rate of cure and inconsistency in action is projected to hamper the market size of matting agents.

Why is North America a Profitable Market for Matting Agent Suppliers?

North America accounts for 33.3% share of the global matting agents market, attributed to the developed coating industry and strong appeal for matte surfaces.

The existence of key industry players, as well as growing preference for areas such as construction, wood cladding, and industrial cladding, are all contributing to the market growth in the region.

How Opportunistic are the Growth Prospects across the U.S Matting Agents Market?

The U.S. matting agents market is projected to expand at a CAGR of 2.9% from 2022 to 2032. Environmental rules enacted in the United States are projected to result in the development of several novel matting agents used in radiation-cursed coatings.

Rapid industrialization, increasing adoption of matting agents for powder coatings, polyurethane, and oil-based paint, and growing demand for organic & inorganic matting agents are the factors driving the market growth in the U.S.

Rising sales of silica matting agents, growing awareness regarding matting agents, a well-established chemical industry, and rising demand by the transportation industry driving the market growth in the U.S.

Why is Demand for Matting Agents High in China?

The market in China is anticipated to rise at a CAGR of 4% over the forecast period. China is likely to see the fastest growth in construction activities over the coming years. The government has been increasing expenditures to build inexpensive adequate housing to meet rising housing requirements.

Massive investments by the government in rail and road infrastructure to support the rising industrial and service sectors have resulted in significant growth in the construction industry in recent years. The market expansion in China is being driven by an increase in research and development activities, attractive prices supplied by manufacturers, government investment plans to support industrial growth, ample raw material availability, and increased investments by prominent manufacturers.

Which Matting Agent Technology is Most Prominent?

Based on technology, the market is segmented into water-based, solvent-based, powder, and other technologies. Water-based technology accounts for 43.8% of the global matting agents market.

In the coatings sector, water-based coating technology is well-known and preferred. Water-based matting agents are mainly composed of up to 80% water and a minor amount of additional solvents. Decorative coatings, hardwood coatings, polymer coatings, and various industrial coatings are all examples of these.

High thermal and wear resistance is provided by water-based technology. In most water-based systems, wax-treated or untreated silica is employed.

Matting agents are utilized in many industrial applications, including colorants, alloys, sheets, and polymers. The growing need for matting agents in various coating formulations, particularly in wood and coil coating formulations, is expected to be fueled by changing customer preferences for matt finishes and the rise of end-user industries such as automotive and construction.

The need for a low-gloss surface and anti-glare qualities in industrial applications where a high-gloss finish causes a distraction for operators has increased the demand for matting agents in the industrial coatings sector.

A low-gloss finish is ideal, especially on factory shop floors where there is a lot of machine operation. As a result, the demand for matting agents in the industrial coatings segment is steadily increasing, to enhance the surface qualities and produce the intended finish on the objects that are coated with matting agents.

Matting agent manufacturers are focused on specialized and broad product offerings. Although attaining a uniform gloss of UV coatings used to be the most challenging task for market players, this has been significantly addressed in recent years due to the development of innovative technologies.

The Japan matting agents market is projected to rise at 4.1% CAGR through 2032.

The U.S., Brazil, Mexico, China, and Germany account for the most demand for matting agents.