According to Fact.MR’s report, between 2016 and 2020, the global epoxy curing agents industry grew at a CAGR of 4% to reach US$ 1.17 Bn by the end of the aforementioned period.

Thus, due to the aforementioned reasons, the market for epoxy curing agents is expected to generate a market revenue of nearly US$ 2 Bn by registering a CAGR of almost 5% by the end of the forecast period 2021-2031. 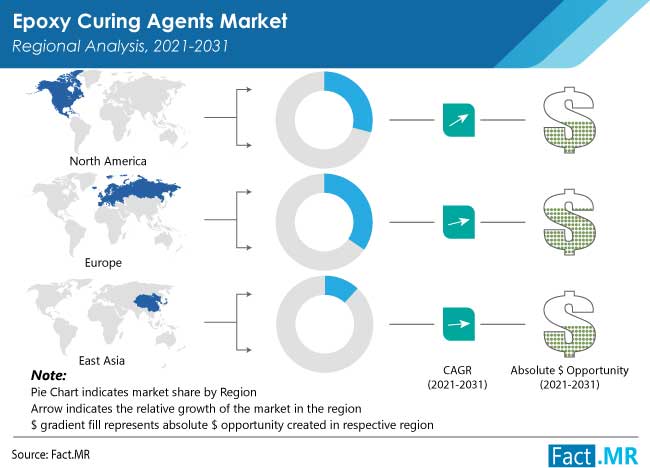 Stringent regulatory norms and quality standards are bolstering the use of lightweight materials in various industrial sectors, including aerospace and automotive industries. According to the Office of Energy Efficiency & Renewable Energy, a 10% reduction in vehicle weight can result in 6-8% fuel economy improvement.

Furthermore, the analysis states that using lightweight components and high-efficiency engines enabled by advanced materials could help conserve over 5 billion gallons of fuel annually by 2030. Hence, uptake of epoxy curing agents in the automotive sector is steadily growing.

Epoxy curing agents have been witnessing burgeoning demand for the manufacturing of printed circuit boards (PCBs) that are vastly used in an exhaustive range of electronic products, such as mobile devices, smartphones, automotive electronics, machinery, and other consumer electronics.

As living standards across emerging economies continue to improve, ownership of consumer electronics is increasing exponentially. For instance, in India, wearable technologies ownership increased by 170.3% YoY in Q1 2021. Likewise, in China, electronic parts investment comprise half of the total consumer electronics landscape. Hence, manufacturers are likely to find plenty of growth opportunities in these regions.

What Growth Prospects Abound Across China?

China is a hub for various manufacturing units. In addition, the presence of end user industries such as biomedical, marine, construction, mechanical and electronic has upsurged the demand for epoxy curing agents in both countries.

Why are Epoxy Curing Agent Manufacturers Attracted to Europe?

Germany and France are two major countries which largely account for the largest share in the aerospace industry. Thus, the demand for epoxy curing agents is high across both countries, heightening prospects throughout Europe.

Top manufacturers of aircraft and mechanical industries has bolstered the demand for epoxy curing agents. Along with this, constant research and development to make the curing agent efficient is driving the sales for the same. Thus, the epoxy curing agent market is expected to account for more than 35% share in the assessment period.

Why are Amines and Polyamines Gaining Traction?

Why is Automotive & Aerospace the Primary End Use Industry for Epoxy Curing Agents?

According to estimates by Fact.MR, the segment is expected to register a revenue share worth 65% across the 2021-2031 forecast period. Manufacturers are likely to find immense growth opportunities in the Asian region, as these are the emerging hubs for automotive manufacturing.

How much is the epoxy curing agents’ industry worth?

At what rate will the epoxy curing agents industry grow from 2021-2031?

What is the expected valuation for epoxy curing agents during 2021?

According to Fact.MR, epoxy curing agents demand is likely to be valued at US$ 1.23 Bn in 2021

How much is the epoxy curing agents market like to be valued by 2031?

The epoxy curing agents industry is expected to reach nearly US$ 2 Bn by 2031.

What are the key trends driving epoxy curing agents sales?

What are the growth prospects across the Chinese market?

Who are the prominent epoxy curing agents market players?

Which type of epoxy curing agents is expected to hold the highest share for sales?

Amines and Polyamines are expected to hold the highest share for sales, expanding at over 48% of market value.

How much is the Europe epoxy curing agents market worth?

The epoxy curing agents industry is expected to possess 35% of market share throughout Europe.