Increasing applications of monoclonal antibodies will lead them to account for more than 10% share of the global sterile active pharmaceutical ingredients (API) market by 2032.

Prevalence of chronic diseases related to oncology, cardiology, neurology, etc., has been rising among the population. An effort towards developing drugs that produce the intended effects has positively impacted the sterile active pharmaceutical ingredients market. Strong quality culture and consistent track of regulatory compliance have enabled market players to efficiently manufacture drugs, which has aided the growth of the sterile API market.

The combined use of aqueous and non-aqueous sterile active pharmaceutical ingredients increased by a compound annual growth rate of 6.4% from 2017 to 2021. Stringent regulations by governments on medical product approvals have ensured consumers’ faith in quality, boosting the growth of the pharmaceutical industry.

Growing adoption of technological advancements such as AI by market players to expand their product lines is expected to fuel the sales of sterile APIs. Adoption of targeted therapy drugs by healthcare professionals will uplift the demand for sterile active pharmaceutical ingredients, especially in developed regions.

Fact.MR says that the global sterile active pharmaceutical ingredients market will be valued at US$ 130.2 billion by 2032, expanding at a CAGR of 6.4% over the next ten years.

The global sterile API market exhibited a CAGR of 6.4% between 2017 and 2021, and according to Fact.MR, a market research and competitive intelligence provider, demand is projected to expand at the same 6.4% CAGR between 2022 and 2032. 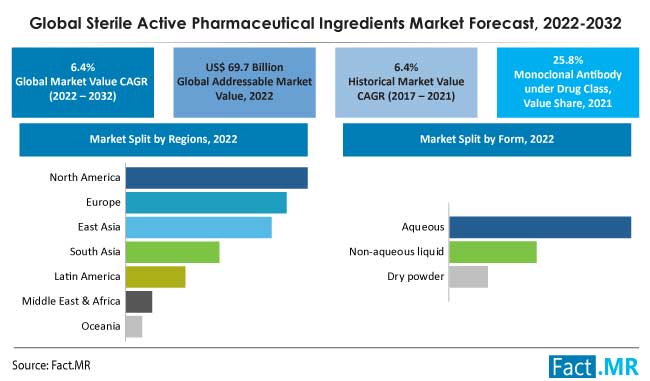 Why is Demand for Sterile Active Pharmaceutical Ingredients Continuously Rising?

The use of APIs has expanded to numerous disciplines, including cardiology, nephrology, endocrinology, gastroenterology, ophthalmology, oncology, cardiology, central nervous system (CNS) and neurology, orthopaedics, and pulmonology. Because cardiovascular disorders have become more common than ever, the field of cardiology is projected to become one of the most important sectors for sterile API suppliers.

Increased prevalence of cardiovascular diseases is probably going to spur the expansion of the market for sterile active pharmaceutical ingredients.

Nearly 50% of major pharmaceutical corporations worldwide favor manufacturing dosage forms outside their own facilities and producing copyrighted APIs in-house. However, for the production of completed dosage forms, businesses collaborate with several CMOs rather than relying solely on producers. The manufacturing of sterile APIs in North America is balanced between in-house production and outsourcing.

What Factor Do Sterile Active Pharmaceutical Ingredient Manufacturers Need to Keep in Mind?

In the United States, 40% of completed drug products and 80% of active pharmaceutical ingredients are imported from outside. The generic medications that are increasingly being prescribed to Americans are primarily made in China and India.

The Food and Drug Administration in the United States is in charge of ensuring that foreign-based manufacturing facilities continue to adhere to Good Manufacturing Practices, a requirement for aseptic pharmaceutical production. But it's not just manufacturing.

Regulatory requirements under the Drug Supply Chain Security Act, which mandates that any corporation intending to sell pharmaceuticals in the U.S. must support product "traceability" by 2023, may soon be placed on shippers and distributors.

Although the law's initial phase of enforcement has been delayed by a year, the supply chain will still need to undergo considerable modifications to fulfil the new standards for traceability and sterilization.

How is Sterile API Production Evolving across the United States?

The United States is a global leader in drug discovery and development owing to high investments in biomedical research. However, it is no longer at the forefront of pharmaceutical production. For a long time, a majority of the medications used by Americans were made within the country. The production of medicines, has, however, steadily shifted outside of the United States in recent years. This is especially true for the production of sterile active pharmaceutical ingredients. Only 28% of API manufacturing units were based in the U.S. as of August 2019.

FDA, however, is optimistic that new manufacturing technology may help American pharmaceutical companies compete more effectively with those in China and other nations, possibly ensuring a steady supply of medicines vital to American patients' health. This is expected to push forward the U.S. sterile API market at a CAGR of 5.4% from 2022 to 2032.

Housing almost 18% of global API manufacturing facilities, India is expected to contribute more than 70% and 10% shares to the South Asia and global sterile API market, respectively.

The Indian pharmaceutical industry has a healthy domestic API market, and many Indian businesses have certain advantages over their Western counterparts. On criteria such as procedural effectiveness and technological prowess, the nation competes on an equal level with Western nations.

The combination of a sophisticated chemical sector, a competent workforce, and strict quality & manufacturing standards is advantageous. Only 2/5 of what it would cost to set up and run a modern company in the West is spent on manufacturing. Additional benefits include low labour expenses and personnel costs.

Because of the high-quality APIs that are produced here, India's API sector has attracted a lot of attention on a global scale. Due to the rising demand for affordable generics and forthcoming developments for the next generation of APIs, the Indian API business has recently experienced phenomenal growth.

The country's API market will undoubtedly grow over the short term thanks to the presence of numerous medium-sized to big API producers and the government's growing focus on the expansion of the pharmaceutical manufacturing industry.

Why are Monoclonal Antibodies Leading the Market?

Increasing applications of monoclonal antibodies are projected to offer an absolute $ opportunity of US$ 28 billion in the sterile API market. Increased demand for biologics is expected to be a major factor propelling the monoclonal antibodies (mAbs) market as a result of the rising prevalence of chronic diseases, including cancer, cardiovascular disorders, and others.

Similar to this, growing mAb therapy applications for targeted therapies and increased patient and physician knowledge of such therapies are anticipated to have a substantial impact on market growth.

Furthermore, the COVID-19 pandemic boosted the chances of market expansion by encouraging the creation of several mAbs that target the SARS-CoV-2 virus. Several of these antibodies have received emergency use authorizations (EUA) from the U.S. FDA because mAbs constitute a promising alternative for mitigating COVID-19 because of their safety and effectiveness.

Additionally, the U.S. Department of Health and Human Services announced the distribution of at least 600,000 free bebtelovimab courses and optional future purchase of 500,000 additional doses, resulting in fresh prospects for mAb growth.

There have been several new product launches and approvals in this field as a result of the key benefits that mAb treatments have over earlier therapies in terms of specificity, efficacy, and ease of delivery. The U.S. FDA has approved more than 100 mAb products, and the range of therapeutic mAb uses is anticipated to expand further thanks to the creation of sophisticated therapeutic options like antibody fragments, derivatives, and bispecific antibodies.

From 2017 to 2021, sales of sterile active pharmaceutical ingredients increased at 6.4% CAGR.

The global sterile active pharmaceutical ingredients market is valued at US$ 69.7 billion in 2022.

Global demand for sterile APIs is anticipated to reach US$ 130.2 billion by 2032-end.

*85 figures and 42 tables includes by FactMR