The global sterile vials market is quite progressive in nature, and is anticipated to ascend at around 8.5% CAGR, topping a valuation of US$ 10 billion by 2031. As the requirement for various type of sterile vials such as sterile empty vials, sterile saline-filled vials, sterile media-filled vials, and others is growing steadily, key industry players are forecast to come across new opportunities over the coming years.

This latest study by Fact.MR offers a holistic overview of the global industry potential, demand-supply patterns, and growth and restraining factors for the forecast period of 2021 to 2031. As stated in the report, the United States, Germany, China, Japan, the United Kingdom, and a few other countries will emerge as prominent markets for sterile vials, while 20+ countries will exhibit high growth potential during the forecast period.

Sales of sterile vials have gained traction over the past decade as the requirement from the key end-use sectors such as clinical labs, compounding labs, and biopharmaceutical companies, to name a few, increased steadily. Additionally, increase in investments by manufacturers to bring in more advanced range of products has further bolstered the growth of key players during the last 5 years from 2016 to 2020.

As advancements in manufacturing sectors are taking over, manufacturers of sterile vials are optimistic to come across higher growth scope in the foreseeable future. Increase in governmental investments in the biopharmaceutical sector, steady expansion of other key end-use industries, and rising demand for COVID-19 sterile vials are expected to offer more growth opportunities for sterile vial suppliers during the forecast period of 2021 to 2031, with the market projected to expand at around 8.5% CAGR over the next ten years.

How is Demand from Clinical Labs Spearheading Growth of Sterile Vial Suppliers?

Sterile vials are widely used in clinical labs for the administration of various medications, R&D activities, and others. As demand from this sector is surging fast, suppliers of sterile vials are expected to come across ample opportunities in the foreseeable future.

According to a report titled “Clinical Laboratory Improvement Amendment (CLIA)”, published by The Centers for Medicare & Medicaid Services (CMS) on 9th March 2021, the United States clinical laboratory sector is highly potential and expected to expand significantly over the coming years. As stated in the report, in total, CLIA covers approximately 260,000 laboratory entities. This gives a glimpse of the growing opportunities for sterile vial manufactures.

What are the Key Challenges Faced by Sterile Vial Manufacturers?

There are a few restraining factors associated with sterile vials that act as challenges for suppliers and manufacturers, such as-

However, with continuous efforts and investments put in R&D activities by manufacturers, the effects of these constraints are expected to get minimized in the near future. 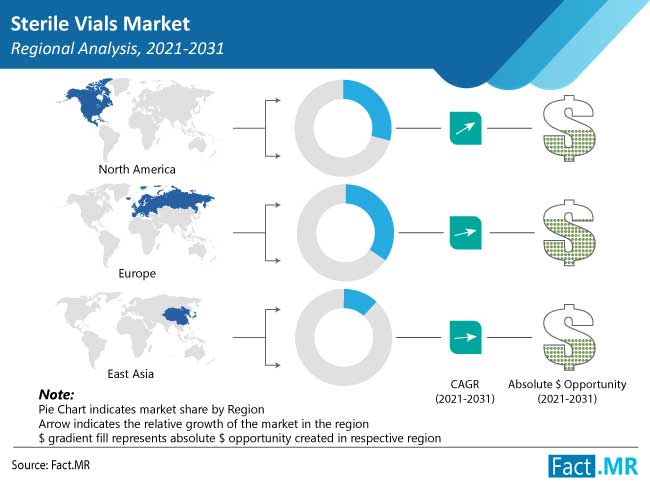 What’s Driving Sales of Sterile Vials in the United States?

According to a report published by Select USA, the U.S. biopharmaceuticals industry accounted for more than US$ 1.3 trillion in economic output, representing 4% of total U.S. output in 2015 alone. As stated in the report, this total economic impact includes US$ 558 billion in revenue from biopharmaceutical businesses and US$ 659 billion from supplier and worker spending. These statistics justify the ample of opportunities for sterile vial providers in the U.S.

What Makes Germany a Heavyweight for Sterile Vial Products?

Germany has been dominating the market in Europe since the past decade, and is likely to exhibit hegemony throughout the forecast period. Backed by advanced clinical laboratories and biopharmaceutical sector, Germany is a hotspot for key players manufacturing sterile vials.

As stated in a report published by the European Commission (EC), Germany is the leading pharmaceutical industry in the European Union (EU), and is subject to exponential growth over the coming years. As stated in the report, more than 500 pharmaceuticals companies are located in Germany, and sales are expected to surpass US$ 48 billion by 2031. No doubt that suppliers of sterile vials are eyeing Germany in order to increase their sales footprint.

China has been in the limelight of Asia Pacific’s market for sterile vials since the past decade. Incorporation of cutting-edge technologies by manufacturers and surge in demand from biopharmaceutical and clinical sectors are spurring market growth in China.

As stated in a report published by Select USA, China’s pharmaceutical industry value reached almost US$ 134 billion in 2018, and grew to US$ 154 billion in 2020. According to the report, factors such as government reforms to channel patient volumes to local medical facilities, saturation of major hospital markets in tier-one cities, and others are projected to aid the growth of China’s biopharmaceutical industry over the coming years. This represents the lucrative opportunities awaiting sterile vial manufacturers in the country.

Will India Remain a Prominent Market for Sterile Vials?

Backed by growing number of clinical laboratories and biopharmaceutical & biotechnological research institutes, India is a hotspot for players in the sterile vials industry.

According to a report titled “Biotechnology Industry in India”, published by Invest India, India is among the top 12 destinations for biotechnology in the world, with nearly 3% share in the global industry. As stated in the report, by 2025, India’s biotechnology industry is expected to reach US$ 150 billion, which is bound to throw up lucrative opportunities for sterile vial manufacturers in the country.

Which Product is Spurring Sales of Sterile Vial Manufacturers?

Presently, sterile empty vials are leading the global market in terms of product, and are set to exhibit hegemony over the coming years. There are different types of sterile empty vials that are extensively used in various sectors, such as sterile evacuated vials, sterile nitrogen filled vials, and sterile air filled vials. As a result, demand for plastic sterile vials as well as demand for glass sterile vials is expected to rise further in the near future.

Currently, glass is the most preferred material for manufacturing sterile vials, owing to various advantages such as-

Demand for glass sterile vials for vaccines is also expected to increase. Plastic is the other key material that is aiding overall demand and sales of sterile vials.

With the competition getting fiercer, sterile vial manufacturers are diversifying their products.

The United States, Germany, China, Japan, India, the United Kingdom, Canada, Italy, France, and a few others are lucrative markets for sterile vials, and are expected to dominate throughout the forecast period.

Presently, sterile empty vials is the most lucrative in terms of product, and is expected to remain dominant over the forecast period of 2021 to 2031.

The global Sterile Vials Market is predicted to be valued at US$ 10 Billion by 2031.

The global Sterile Vials Market is estimated to record a CAGR of 8.5% during the forecast period.