Transportation infrastructure plays an important role in the development of economies as it primarily controls the imports and export sector of every market.

Globally, big infrastructure projects are in progress, notably for construction of roads, railways, bridges, and ports, to strengthen the transportation backbone. Every construction process requires compaction of soil to rearrange soil particles and reduce the void ratio.

Owing to this factor, Fact.MR opines that the global soil compaction machine market will reach a valuation of US$ 9 Bn mark by the end of the forecast period.

On the other hand, light compaction machines are being used where less soil compaction is needed.

However, sales of light tandem rollers, as opposed to trench rollers, are expected to account for more than 51% shares of the light compaction machines segment. Furthermore, owing to the superior productivity and compaction output offered by trench rollers, the segment is foreseen to grow ~1.5 times faster than light tandem rollers over the course of forecast duration, finds Fact.MR. 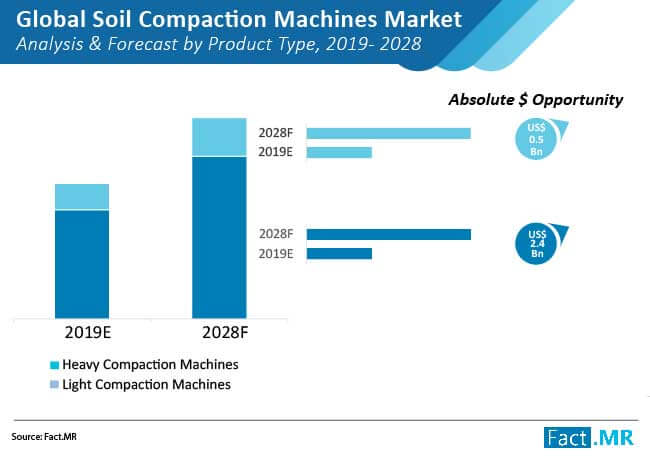 Nowadays, due to stringent government mandates and consumer preference for connected vehicles, the adoption of telematics is on the rise. As the maintenance for the heavy-duty vehicles is more costly as compared to normal vehicles, advanced telematics helps in reducing the overall operating cost.

Manufacturers in the soil compaction machines market offer service contracts and extended warranties to control operating costs throughout the lifespan of the machines. Following this trend, renowned players in the soil compaction machines market such as John Deere and Volvo have introduced machine monitoring services last year.

The adoption of advanced telematics to reduce operating costs is likely to gain further momentum in the soil compaction machines market in the coming years.

Metropolitan development and better connectivity become the paramount goal for various governments around the globe. The governments of developing economies like China and India are investing more to strengthen their transport infrastructure.

In current scenario, policies like re-surfacing of roads in a specific period have increased the demand for construction equipment sales which includes soil compaction machines. In China, the ‘one belt, one road’ initiative helps in embolden the rapid expansion of transport infrastructure and it also stretches to Central Asia, the Middle East, and Europe.

On the back of valuable investments in roads & building construction in the Asia Pacific region, the demand for soil compaction machines is skyrocketing, which in turn generate lucrative avenues for key market actors. According to the Fact.MR analysis, the Asia Pacific contributes 25% of the global revenues of the soil compaction machines market and the similar trend is foreseen to be followed over the course of forecast duration. 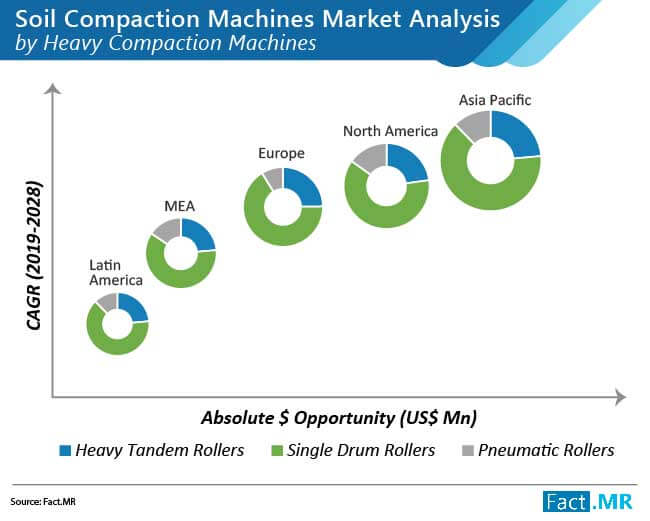 Intelligent Compaction (IC) technology is being used by the operators of soil compaction machines to achieve uniform compaction. However, IC technology lacks the delivery of maximum compaction efficiency. Thus, key players are investing considerably in their R&D activities to achieve improved price to performance ratio. For Instance,

*85 figures and 92 tables includes by FactMR