The global winding machines market has reached a valuation of US$ 3.5 billion in 2022 and is expected to progress at a noteworthy CAGR of 7.4% to increase to a size of US$ 7.14 billion by the end of 2032.

The need for winding machines is predicted to increase globally due to the vast range of end uses, including wire bonding, wire winding, and wire welding. The end-use industries include automotive, healthcare, agriculture, aerospace, electrical & electronics, and energy & power, among a few others.

Sales of winding machines are rising as a result of the expanding automotive, agricultural, textile, and electrical markets. One such prominent example is electric vehicles. Over the coming years, rapidly rising electric car demand will lead to an increase in the sales of the winding machines.

From 2017 to 2021, the global market for winding machines registered a CAGR of 1.1%. Fact.MR, a market research and competitive intelligence provider, reveals that the market will exhibit higher growth at 7.4% CAGR between 2022 and 2032. 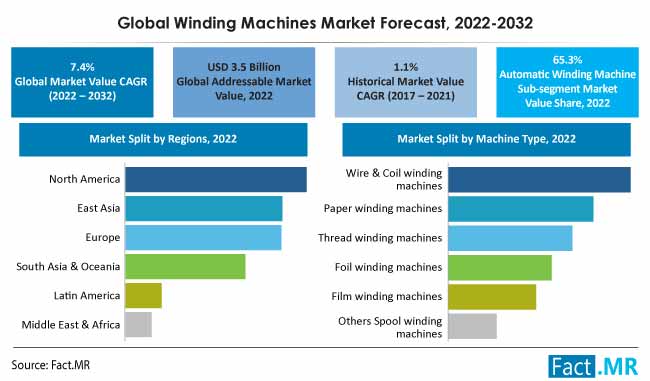 Why is Demand for Winding Machines Surging across the World?

Winding machines are designed in such a way that they provide high productivity, accuracy, consistency, reliability, and high precision handling. These factors that can be accurately adjusted with the aid of an appropriate winding machine.

Manufacturers are creating multi-speed machines in a variety of types and categories that can work in across industry verticals. The production efficiency of the manual winding process was low due to the variety of winding products and the skill of operators. The emergence of automatic winding machines has enabled the production automation of winding by reducing winding labor intensity and significantly boosting production efficiency.

The market for winding machines is anticipated to expand as a result of the rising demand for wearable technology, 3D printing, material advancements, and textile advancements as well.

Key suppliers of winding machines are expected to witness significant growth in demand as a result of rising sales of these machines in the textile industry. Wearable textiles with electrical built-in sensors will present a huge possibility for innovation, and thereby, market expansion.

The integration of cutting-edge technology in winding machines will also complement market expansion. To improve their competitiveness, major market players are concentrating on creating more advanced technological solutions for end users in the winding machines market.

How Can Market Expansion Get Adversely Affected to Some Extent?

High initial cost of the equipment is one of the main factors impeding the growth of the global market for winding machines.

Moreover, the transmission components of winding machines are prone to frequent wear and tear and might get stuck abnormally and operate unevenly without proper oil & lubrication, which could lead to machine failure, thereby affecting productivity.

Repeated maintenance and the high cost of these machines can hinder market growth to some extent.

How is Increasing Use of Wires & Coils in the United States Driving Transformer Coil Winding Machine Demand?

Over the coming years, the U.S. market for transformer winding machines is anticipated to expand as the demand for electric vehicles rises. In electric automobiles, the car charger port is used to connect to an external power source so that the vehicle can be charged while the auxiliary battery powers the vehicle.

Transformers are needed to run the power supply efficiently when charging stations are connected to the grid. North America was the largest regional market for transformer winding machines in 2021.

As a result, the market for transformer coil winding machines is expanding rapidly due to the rising demand for electric vehicles.

The United States winding machines market is currently estimated at US$ 788.9 million and is expected to reach US$ 1.52 billion by 2032.

Why is China a Highly Lucrative Market for Winding Machine Manufacturers?

Winding machines are projected to continue to offer sizable growth potential due to their portability, demand for energy from businesses, and renewable nature.

Since there is projected to be demand for new technologies that save energy and the growing reliance on sustainable energy, China is expected to generate major opportunities for new companies.

These factors will enable the growth of the Chinese winding machines market in the long run and generate an absolute dollar opportunity of US$ 648.3 million over the 2022-2032 study period.

Why are Automatic Winding Machines a Popular Technology?

The way winding technology has evolved as automation technologies have advanced in several manufacturing fields is impressive. Automatic winding machines now come with a variety of functions that were previously not heard of. These automated features shorten processing times, ensure quality is upheld, and reduce the need for an operator.

Owing to the above facts, the automated winding machines market is predicted to expand 2.1X by the end of 2032.

Why is Market Growth Being Led by the Textile Industry?

Players in the winding machines market will experience significant growth as a result of the expanding textile industry. Wearable textiles with built-in electrical sensors will allow for high levels of innovation. The market for winding machines is anticipated to expand in the near future as a result of the rising demand for wearable technology, textile developments, and evolving 3D printing and material advancements.

The modern textile industry is extremely demanding, and winding machines must meet these demands by producing more products, improving package and yarn quality, making operation and maintenance simpler, creating a better working environment, and automating their processes even more.

As such, demand for winding machines from the textile industry is expected to grow at an impressive rate of 8.1% CAGR over the decade.

The high initial cost of winding machines will create a significant bottleneck in producing competitive machines. Key market players are working to launch advanced technology into the market. Also, there is an emerging need to develop automated processes to pave the way for higher volume production. Major manufacturers are expected to offer different categories and types of multi-speed machines to serve different functions across industries.

The global winding machines market is valued at US$ 3.5 billion.

Global demand for winding machines is anticipated to reach US$ 7.14 billion by 2032.

*154 figures and 98 tables includes by FactMR