The fast-growing requirement for construction machinery has driven the demand for various types of trucks, cranes globally. As per a recent industry analysis by Fact.MR - market research and competitive intelligence provider, the global construction machinery market is expected to reach a valuation of around USD 208 Billion by 2022 and is likely to grow at 4.3% CAGR during the forecast period of 2022-2032.

The global articulated hauler market accounts for ~3% revenue generation for the global construction machinery market. It is projected to rise with a CAGR of 6% and generate an absolute dollar opportunity of nearly USD 5.5 billion between 2022 & 2032.

Governments have increased the investments in industrialized and emerging countries for the development of infrastructure projects are anticipated to drive market growth. For instance, according to the Euro construct report, in 2019, construction output reached about USD 1,900 Billion in European countries.

Historically, the market value of the articulated hauler industry showed a growth of 4.2% CAGR from 2017 to 2021. The global articulated hauler market has generated an absolute dollar opportunity of around USD 1.3 billion in the last half-decade. It is estimated to generate opportunities of around USD 2.3 billion and 5.5 billion by the mid (2022-27) and long-term (2022-2032) respectively.

In addition, in terms of value, the Japanese articulated hauler market is the second-largest market in the global as well as the East Asian market. It is likely to grow with a 2.8% CAGR and provide remarkable absolute dollar opportunities during the forecast period.

From the segmental analysis, based on payload capacity, the 30-40 Million Tons segment is the largest market shareholder. It has grabbed nearly 2/3rd market share and is projected to grow at the CAGR of 6.5% during 2022-2032.

Further, South Asia & Oceania articulated hauler market has shown significant growth in the last few years. It has acquired nearly 1/5th market share in the global market with a growth of 5.3%. The growing investment in the construction and mining industry is expected to boost the demand for articulated haulers in the region. South Asia & Oceania is likely to grow at the CAGR of 7.8% and generate annually incremental opportunities of around USD 95 million amid 2022 & 2032.

From the segmental analysis, the demand for a different type of articulated haulers grew 1.1X in the last half-decade and it is anticipated to grow by 1.9X demand in the mining industry. The mining industry is projected to rise at the CAGR of 4% and generate an absolute dollar opportunity of nearly USD 873 million by 2032.

Increased building construction in metropolitan areas, combined with rising rental demand, will drive demand for articulated haulers in the global market. With the economic recovery in markets, buildings and heavy loads are expanding on crowded city sites, requiring the use of articulated haulers. Further,

Manufacturers are also seeing an increase in the number of articulated hauler models. Growing efforts to develop dams, highways, railways, and roads are expected to fuel demand for articulated haulers during the forecast period.

Automobile Industry Likely to Boost the Sales of Articulated Haulers

The growth of the industrial and utility sector is expected to create opportunities for articulated haulers. The continuing rise in the utility and industrial sector, particularly in emerging economies such as Brazil, India, China and others is driving the demand for construction equipment.

Moreover, initiatives taken by infrastructure planning commissions and policymakers are further supporting the growth of the industry in such countries. Rural and urban infrastructure projects associated with oil & refineries, mining & roads, dams, highways, railways & metros and power infrastructure development are expected to create value propositions for the articulated hauler Market in the coming years.

Robust Urbanization to Support the Growth of the Market

Urbanization across the globe is expanding at a positive rate, especially in emerging economies such as India, China, Argentina, Mexico and Brazil, which, in turn, is contributing to the growth of the construction industry. The construction activities in both commercial and residential areas are rising owing to increasing population and growing demands for roads & transport infrastructure, which is expected to drive the demand for articulated hauler worldwide.

Asia Pacific region has been segregated into two regions includes East Asia and South Asia & Oceania. East Asia articulated hauler market is the one furthermost profitable market. It has acquired more than 1/4th market share of the global market.

In addition, the East Asian market is largely dominated by the Chinese articulated hauler market which has acquired more than 3/4th market share followed by Japan and South Korea. East Asia is projected to grow at a CAGR of 6.1% and generate an absolute dollar opportunity of more than USD 1.2 billion by the end of 2032.

What is the European articulated hauler Market Scenario?

The European articulated hauler market consists of numerous regional markets such as Germany, Italy, France, Spain etc. Europe holds nearly 17.3% of the overall market share and is projected to rise at a CAGR of 3.8% in the coming years. This is attributed to the escalating demand for up to 400 HP, engine power, in countries like the United Kingdom and Germany. 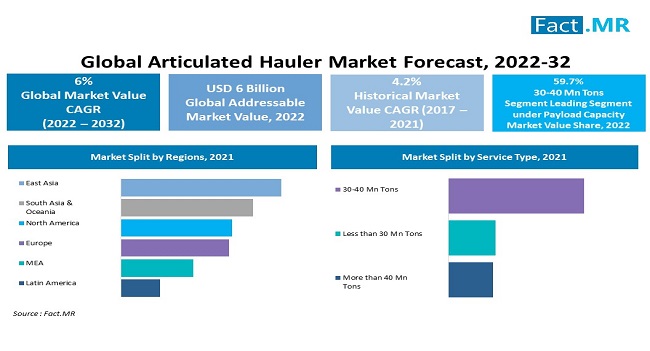 Which End-Use Industry is poised to Show lucrative Growth in Articulated Hauler Market?

Articulated Haulers have been used in Mining, Construction, Forest & Agriculture industries. Mining is the second-largest market shareholder in the global market. The mining industry’s current situation creates a need and an opportunity to address the financing challenges of the industry. Prices have abruptly declined since January 2020 in many commodities, including thermal zinc, coal, steel, aluminum, copper, lead, iron ore, nickel, and metallurgical coal.

However, increasing demand for raw materials such as zinc, steel etc. may boost the global mining industry. In turn, this is projected to drive demand for articulated haulers to use in mining to transport the ore and other materials.

The global articulated hauler market is fragmented due to the presence of several regional and domestic players. The players have adopted numerous such as mergers and acquisitions, expansions, collaborations and partnerships to expand the consumer base globally.

Also, the leading companies have adopted new product development as a key strategy to upscale their market presence among consumers. These strategies have resulted in the integration of advanced articulated hauler.

The global value of Articulated Hauler market is estimated to be worth over USD 6 Billion in 2022.

Up to 400 HP under engine power contributes 49.3% of market share in global sales of Articulated Hauler.

*117 figures and 64 tables includes by FactMR