In terms of consumption, the global bleach precursor market grew at a CAGR of 1.4% over the historical period and valued at USD 400 Million in 2021.

During the 2017-2021 timeline, the global bleach precursor market is remained on the positive side of the growth graph, with a significant proliferation across various end-use industries. Bleach precursor has been witnessing significant adoption in several laundry cleaning products.

Overall the prospects for bleach precursor continue to increase, and manufacturers can expect torrents of opportunities in the global market during the period of forecast from 2022 to 2032.

What are the Prominent Driving Factors of the Bleach Precursor?

Detergents comprising of bleach precursor as a raw material are highly effective in low temperatures regions. The demand for highly concentrated detergent powder is escalating with passage of time. Moreover, utilization of tetraacetylethylenediamine (TAED) bleach precursor is also increasing constantly.

Additionally, the demand for detergent with bleach precursor is increasing in the textile industry, as textile wash process includes washing machine at a water temperature of below 60°C. Such wash temperature is used due to the textile care and energy considerations.

Moreover, TAED and NOAB based bleaching activators are the most utilized household bleach in detergents worldwide. Detergent market in developing countries have seen robust growth in the last few years. This can be attributed to development of new products supported by heavy media advertising and promotional activity by the manufacturers of major brands growing economies.

Middle class expansion, urbanization, and global disease burden have significantly transformed the residential infrastructures in developing countries. Owing to which, the demand for bleaching activators is also anticipated to propel in household care segment.

Why Bleach Precursor Market in China is anticipated to Grow Faster Rate than the Global Average?

China is one of the largest market bleach precursor owing to the extensive consumption across households. China is the largest producer as well as the consumer of washing machine across the globe.

Growing population along with the growth across household requirements is the primary reason attributed towards increasing the sale of washing machine.

With the growing utilization of washing machine the demand for household cleaning solutions along with laundry detergent has been increasing at a steady pace from the past half decades in China which in turn driving the requirement for bleach precursor.

China bleach precursor market anticipated to grow at a CAGR 3.7% over the forecast period.

Russia is the coldest country across the globe and known for long cold winter and relatively low precipitation. Normal detergent is not that effective due to the low temperature across the country.

Here the bleach precursor come into picture which is specifically formulated for detergent and cleaning solution uses at low temperature.

Russia bleach precursor market valued over USD 57 Million during 2021 and anticipated to grow at a nominal CAGR of 1.1% over the forecast period. 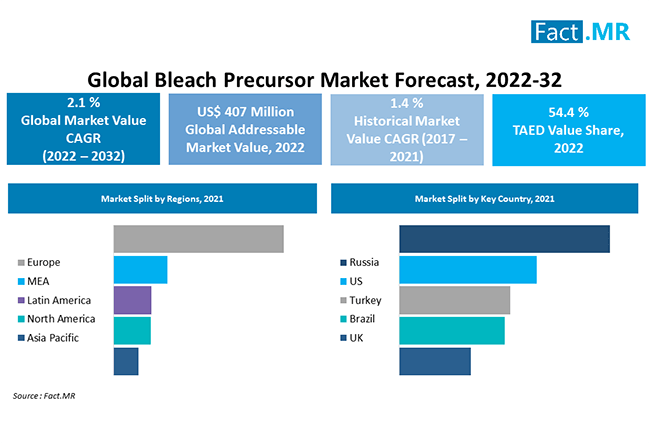 How Increasing Use of TAED in Laundry Detergents Accelerating Bleach Precursor Market Growth?

Tetraacetylethylenediamine (TAED) is the most common bleach precursor used in the laundry detergents, especially in Europe.

TAED offers significant advantages including highly-effective at lower temperatures, compatible with other ingredients in detergents, offers good biocidal activity even at 40°C, and no damage to fabrics and dyes.

TAED is being used on a large scale in concentrated and highly concentrated detergent powder formulations. New regulations and the introduction of high-efficiency washing machines with low washing temperatures are driving the demand for TAED, thus, resulting in bleach precursor market growth.

TAED, a bleach precursor is used on a large scale in detergents as it produces peracetic acid, a powerful stain remover for oxidizable stains, also killing bacteria, spores, and viruses.

However, poor solubility of TAED in water, leads to non-optimal bleaching performance, thus, impacting its growth in the bleach precursor market.

Paper and pulp industry has been thriving owing to massive consumption of paper which has risen by 400% in last 40 years, as reported by Green America. With the introduction of a digital era, paper consumption has impacted yet its popularity has remained consistent. Growing utilization of paper boards in the packaging industry has further enhanced the demand of paper.

But the higher consumption of papers has generated direct negative impacts on environment with the massive cut down of trees. To resolve the higher demand of paper, paper recycling has also become an important sector of the paper industry which also holds significant utilization of bleaching agents. Thus, paper and pulp industry remains one of the important end user of the bleaching agents which ensues the future demand of bleaching activators.

Also, new strategic approaches have been adopted by the leading companies to upscale their market presence among consumers. These strategies have resulted in the incorporation of high demand for bleach precursor.

*126 figures and 74 tables includes by FactMR