The Asia-Pacific and Middle East and Africa markets account for over 60% of the revenue in the growing up milk market.

Despite of the declining birth rates in developed nations, a rapidly surging number of working women has hugely contributed to the recent rise in demand for nutritional supplements and growing up milk products.

Parents are majorly relying on growing up milk products to meet the nutritional needs of toddlers to ensure that they grow strong.

To attract a larger consumer base, manufacturers in the growing up milk market are fortifying growing up milk products with minerals, vitamins, and prebiotics that can enhance toddlers’ nutritional intake and improve their immunity

Furthermore, market players are expanding the range of their target consumers by introducing growing up milk products for older infants to meet the burgeoning demand for nutritional supplements for toddlers.

According to the National Health and Family Planning Commission (NHFPC) statistics, after China dropped its one-child policy, the number of births in the country increased by 7.9% to reach 17.86 million in 2015 over 2014, and the number is likely to stand between 17-20 million in 2020.

According to the World Fertility report published by the United Nations (UN), fertility rates in Asia remained relatively higher in Asian countries during 2010-2015, which creates a lot of sales potential for growing up milk products in Asian countries. 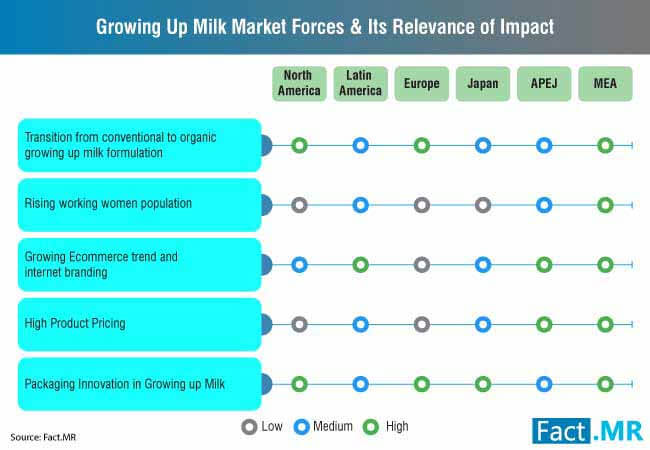 The marketing strategies adopted by leading manufacturers and distributors in the growing up milk market have invited criticism from governmental organizations, including the World Health Organization (WHO).

For example, WHO declared in one of its official statements that follow-up formula products are “unnecessary” and “unsuitable” for the growth and development of toddlers.

The Commission also modified to labelling requirements for substitutes for breast milk by delegating the Regulation (EU) 2016/127, which is likely to come in effect in 2020.

Stringent regulations and unfavorable recommendations from governing bodies may create more challenges for growing up milk market players in the upcoming years. 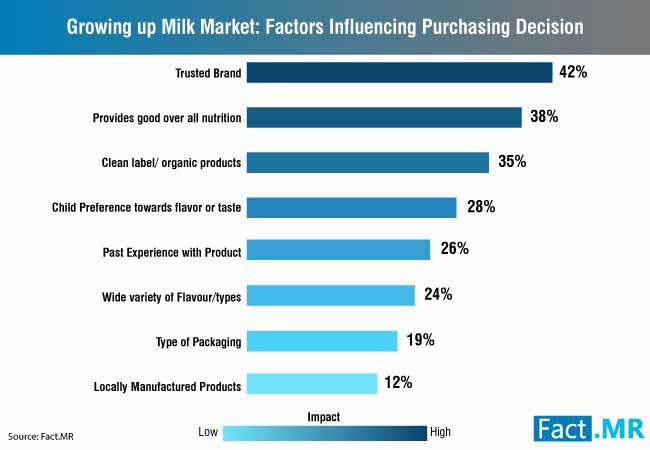 Modern parents are becoming highly aware of the health benefits of breastfeeding infants and young children for at least 1 year.

According to statistics published by the U.S. Department of Health & Human Services, the breastfeeding initiation rates in the U.S. increased in 2015 as more than 83% infants were breastfed in 2015.

Inclination of parents towards breastfeeding their infants as well as young children rather than turning to growing up milk products may make a significant impact on growth of the growing up milk market in the coming future.

Leading manufacturers in the growing up milk market are likely to invest heavily on research & development to further enhance the nutritional characteristics of growing up milk products in the upcoming years.

The recent discoveries on the important role Human Milk Oligosaccharides (or HMOs) in boosting health of toddlers and younger children are redefining the emerging trends in the growing up milk market.

Addition of HMOs to growing up milk products is known to improve the nutritional qualities of the products, which can further help to improve the immune health of toddlers.

This section in the Fact.MR study aids readers to fathom the most recent developments in the growing up milk market with the help of insightful information about the leading manufacturers and other stakeholders in the market. 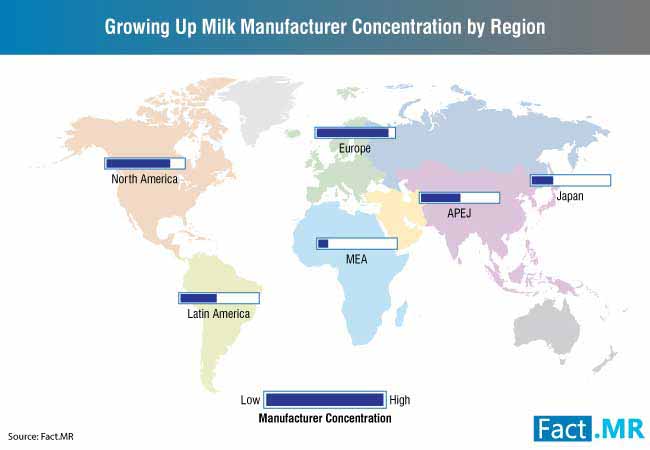 To be in line with the initiative, Nestlé is reformulating its product portfolio to enhance foods and beverages for children, including growing up milk products (Nido organic milk powder), with micronutrients.

Another leading player in the growing up milk market – Danone announced to have launched a €300 million social bond to focus on the positive social impacts of the company’s operations.

With the launch of this bond, the company is aiming to create a sustainable value for all stakeholders, including communities, consumers, as well as employees.

The leading manufacturer of growing up milk product is also a part of the NaturALL Bottle Alliance, which is a research consortium formed to promote the use of renewable and 100% sustainable packaging materials. This is likely to make the company one of the socially-responsible players in the growing up milk market in the upcoming years.

Mead Johnson Nutrition Company (MJN), another leading player in the growing up milk market, recently announced its merger with a British consumer goods company – Reckitt Benckiser Group plc. (RB). The company announced that its growing up milk product brands Nutramigen© and Enfa™ will be added to the consumer health product portfolio of RB.

The accuracy and authenticity of the qualitative and quantitative information on how the growing up milk market will grow during 2018-2027, is ensured during the research. 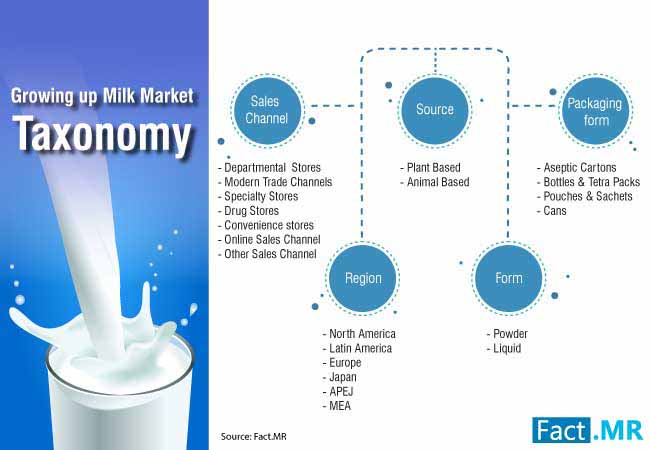 Who are the key players in the Growing Up Milk Market?

What is the CAGR for Growing Up Milk Market?

The Global Market For Growing Up Milk Is Anticipated To Grow At A Value CAGR Of 5.9% During The Forecast Period.

Milk Mineral Market is set to witness healthy growth by 2027. The growing demand for calcium & miner...