PBT demand from the automotive industry is expected to grow at a healthy 6.8% CAGR, and is anticipated to generate sales close to US$ 1.5 Bn by 2031. Moreover, developed countries such as the U.S., Canada, Germany, U.K., and Italy held significant share in the global market.

Historically, polybutylene terephthalate has been used in range of automotive applications, including structural parts for ignition coils and chassis creating remunerative opportunities in the market. Besides, owing to the superior properties of PBT at higher temperatures as compared to its substitutes, electrical and electronic application is forecast to become prominent and expected to be valued over US$ 2.3 Bn by 2031.

Innumerable applications of polybutylene terephthalate in electrical encapsulation materials, electrical insulation polymers, and electrical and electronic plastics are set to invigorate its demand over the forecast period.

It has been observed from the past half-decade that 51% of engineering plastic products and materials utilized in automotive, electrical, and electronics applications are PBT-based. Furthermore, owing to its high melting point, PBT has been gain popularity in the thermoforming of packaging and extrusion of films.

Considering growing adoption of polybutylene terephthalate in numerous industries and shift in overall market dynamics, globally, the PBT market is forecast to expand at a healthy CAGR of more than 6% over the coming 10 years.

What are the Key Opportunities for PBT Manufacturers?

Government of countries such as China and in several countries of European Union are supporting manufacturers of polybutylene terephthalate by looking into incentivizing the producers over the PBT produced and encouraging the investors to channel their investments in this high potential business.

Due to extensive production and consumption of PBT in East Asia especially China, has favored economies of density. This factor is anticipated to invite foreign players to invest in production of PBT in the country which would not only provide higher absolute $ opportunity but also would pave way for the manufacturers to enhance their market share across the globe over long-run forecast period

Moreover, government-led campaigns such as “Make in India” planned to reduce the import dependency of engineering plastic including polybutylene terephthalate. The plan includes invitation of global players in Indian market simultaneously encourage them to build up new manufacturing plant in Indian soil which leads to increased availability of engineering plastics at comparatively lesser cost.

What are the Challenges Faced by PBT Suppliers?

For instance, Shell Chemical is focusing on production of polytrimethylene terephthalate (PTT) as a replacement for PBT. In the year 2019, the company announced a cluster of commercial-scale expansions to serve markets related to PBT. The company also planned to sell 600 million pounds worth of PTT as a replacement of PBT.

Like PBT, PTT’s primary monomer is terephthalic acid (TPA), but PBT contains 1,4 butanediol and PPT uses 1,3 propanediol as its glycol. Keeping aside the difference in chemistry, the properties of polytrimethylene terephthalate (PTT), including flexural modulus, tensile strength, and heat deflection temperature are quite similar to PBT. Moreover, the substitute has already penetrated the market, and is likely to affect demand for PBT over the long-run forecast period.

Will Sales of Polybutylene Terephthalate Gain Traction Due to Escalating Demand for e-Mobility?

Growing utilization of polybutylene terephthalate in electric vehicles for manufacturing of interior as well as exterior body parts is set to propel the market growth during the forecast period 2021-2031.

Growing awareness towards environmental pollution is causing a shift in consumer preference towards electric vehicles instead of fuel (diesel, petrol and CNG) based vehicles. Automotive trends, such as electrification, automated driving and a push towards reducing emissions are creating a progressive growth environment for polybutylene terephthalate market.

In addition, hydrolytically resistant PBT made a great impact in manufacturing of several sensitive electronic sensors for electric vehicles. Owing to a plethora of applications in electrical vehicles, consumption of polybutylene terephthalate is anticipated to increase by over 6% CAGR during 2021-31.

Which Region Offers the Largest Opportunity for Sales of PBT?

East Asia is forecasted to be the most lucrative market for PBT suppliers, and the region will maintain its dominance with an anticipated absolute $ opportunity worth around US$ 1.4 Bn by 2031.

Being a prominent automotive producer in the world, China is witnessing the highest consumption of polybutylene terephthalate in the region. China accounted for over 1/3 of the global market in 2020, and is expected to continue its dominance over the forecast period.

Additionally, over the past half-decade, region has witnessed steady growth in electric vehicles production, which has provided a clear picture of the PBT consumption growth.

After East Asia, Europe, led by Germany, is the second-highest consumer of PBT, and is considered as a relatively mature market. Europe’s has captured over 35% of the global market share in terms of value, and is poised to expand at a CAGR of 4.6% during the forecast period of 2021-2031. 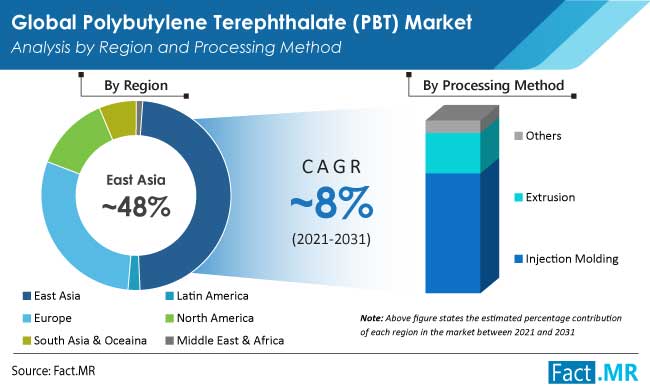 Why is Germany Driving Most PBT Demand in Europe?

In terms consumption, European demand for PBT is dominated by Germany. The market of Germany grew by 2.6% from 2016-2020. Additionally, the country is one of the highest manufacturers of automobiles, which leads to growing utilization of PBT.

In the year 2020, Germany accounted over 10% of the global market share and over 27% of the European market share. The country’s automotive industry planned to spend US$ 60 Bn in 2021.

It has been seen that approx. 15%-20% of PBT-based products are used by German automobile manufacturers during the assembly process of automotive manufacturing. Owing to extensive spending in the automotive sector, the country continues to be one of the key consumers of PBT.

What Makes China the Demand Epicentre for PBT?

In 2020, China accounted for over 28% share of the global market and over 70% of the East Asian market for PBT. The electrical and electronics segment corresponds to over 40% of all PBT-based products and material sales in China.

China is a prominent consumer and producer of PBT-based products in the market. Besides, the country has observed an upsurge in exports of PBT-based electronics and automotive parts during 2016-2020.

China has not only evolved as a potential hotspot for PBT business but also expanded as a key investor in engineering plastics. This is anticipated to strengthen the PBT business in the country.

Owing to this fact, the market in the country is anticipated to surge at a CAGR of more than 8% CAGR over the long-run forecast period.

Why is Reinforced PBT the Most Utilized in Several Applications?

Demand for reinforced polybutylene terephthalate is expected to register a CAGR of 6.3% over the forecast period and account for over 80% of the global market share in terms of value by 2031.

Reinforced PBT is the prominent PBT type available in the market. Besides, the demand for 30% reinforced PBT has gain traction in the past half-decade. It is expected to grow at a CAGR 6.7% and anticipated to be valued over US$ 1.9 Bn by 2031.

Compared to unreinforced PBT type, it is proven that all grades of reinforced PBT (15%, 30%, 50% and >50%) are more effective in terms of product manufacturing. As such, demand for unreinforced polybutylene terephthalate is less. 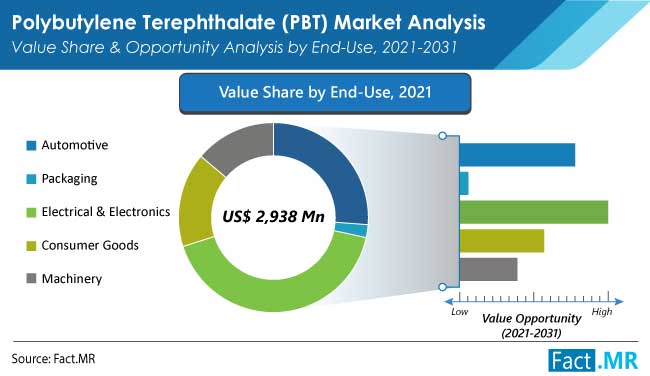 Among all the electrical and electronics end-uses, the utilization of PBT is prominent in producing transformer coil bobbins. It thereby accounts for over 29% of the demand for polybutylene terephthalate in the electrical and electronics industry. Utilization of PBT in making adapter coil bobbins also expected to increase at a CAGR of 6.2% over the forecast period.

How Has the COVID-19 Pandemic Impacted Sales of PBT across the Globe?

Despite decline in sales of PBT in FY2020, investors’ confidence level is firm owing to the strong potential of PBT. Major investors in China and Europe have pinned their hopes on the market owing to less demand in FY2020 and speculations of a surge going ahead.

Speculation has surged production and also normalized inventory volumes, thus providing a thrust to PBT prices in Q1 of FY2021. Prices are anticipated to reach a nominal level by the mid of Q2 FY2022.

Majority of companies discussed in the report have focused on product launches and expanding their manufacturing units in developing regions. Some of the key strategies include innovation, collaborations with key players, partnerships, strategic alliances in order to strengthening of regional and global distribution networks.

Similarly, recent developments related to companies manufacturing polybutylene terephthalate have been tracked by the team at Fact.MR, which are available in the full report.

The global polybutylene terephthalate market is estimated to be valued at US$ 2,938 Mn in 2021, and is expected to expand at a CAGR of more than 6% over the next 10 years.

Demand for PBT is expected to emerge in consumer goods and machinery end-uses over the forecast period. Both these end-use segments cumulatively account for over 26% market share.

Over the historical period of 2016-2020, the PBT market created an absolute dollar opportunity of US$ 70.6 Mn globally.

Governments around the world will continue to implement new fuel emission norms and e-mobility. This will positively impact vehicle weight, and will encourage component manufacturers to introduce more plastic components to reduce weight.

Upsurge in demand for engineering plastics for better performance in automotive, electrical, and electronics products is a key factor driving demand for PBT.

China, the U.S., Japan, Germany, and U.K. are among the top 5 countries driving demand for PBT.

North America, led by the U.S., is the third-largest market after East Asia and Europe. This regional market is expected to reach US$ 696 Mn at a CAGR 5.4% by 2031-end.

China, Japan, Germany, and the U.K. are key producers of PBT due to the presence of leading manufacturers in these countries.

China, Germany, and the U.S. are the top three exporters of PBT. These nations have clusters of engineering plastic manufacturers with multiple production bases.

Japan is one of the leading markets for PBT, and accounted for more than 10% market share. South Korea is expected to top US$ 200 Mn in terms of value by 2031.