The global scrubber dryer market is slated to expand at a healthy CAGR of close to 8% from 2021 to 2031. Demand for scrubber dryers is increasing due to rising concerns about healthcare and hygiene across regions and verticals. Scrubber dryers are used in various end-use sectors such as healthcare,

households, commercial, government institutions, airports, and railway stations, to name a few. Battery-operated scrubber dryers are most sought-after, holding around three-fourth of the global market share.

In the latest report, Fact.MR examines key factors that are expected to drive demand for scrubber dryers through 2031. This report tracks the trends of various markets, in which North America, followed by Europe and East Asia, lead the way. The study also discusses the effect of the COVID-19 pandemic on this sector, as well as the market's possible future trajectory through 2031.

Over the past half-decade of 2016-2020, value of scrubber dryer sales propagated at a CAGR of 2.6%. Increasing urbanization and rising health concerns among the people are prime bellwethers for growth. Increasing adaptability in households has also led to heightened sales. Up-gradation of scrubber dryer machines to eco-efficient modes has increased their productivity and demand, ensuring high growth of the market.

Owing to these factors, demand over the long-term forecast period can be estimated by segregating the forecast timeline into three parts.

Short-run: Recovery growth set to be observed over this term.

Medium-run: Demand and price normalization set to be exhibited over this period. 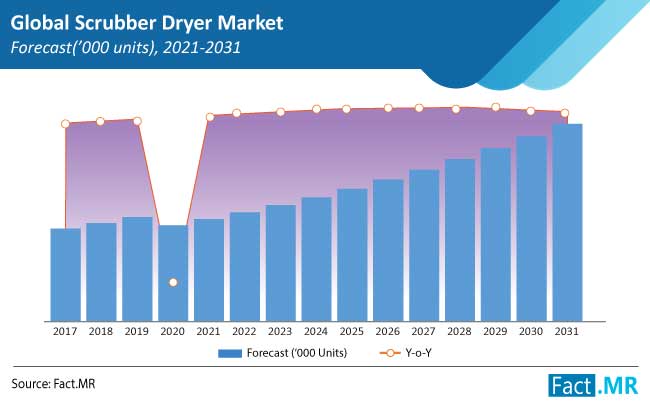 Why is Demand for Scrubber Dryers Increasing?

Latin America, South Asia, and the Middle East & Africa have low adsorption rate of scrubber dryers. Infrastructural facilities in these regions is slightly on the lower side. Increase in utilization among various end-use industries along with elevated standards of living with increasing awareness has diversified the scope for scrubber dryer manufacturers all around the globe.

Many countries have fully-equipped healthcare facilities that use scrubber dryers for cleaning purposes, to provide hygienic care and a germ-free environment. Regions such as Europe and North America are among the leading utilizers of scrubber dryers in the world.

Increasing the legalization for terminating the use of harmful chemical disinfectants and overutilization of water has promoted the use of scrubber dryers, as these machines employ the utilization of environmentally friendly chemicals and devices that utilize less water.

These factors have motivated manufactures towards the development of compact-sized and user-friendly scrubber dryer equipment.

How is Indirect Market Shaping Demand for Scrubber Dryers?

Many companies are investing in small startups to increase their brand portfolio and come up with innovative ideas for the cleaning market. An example of this trend is Karcher. Companies are also investing in digitalization of machinery and installation of numerous new technologies that help in the up-gradation of these devices.

Development of new sizes and variants, along with sensor technology innovation, plays an important role in market players communicating with customers, promoting their offerings, and building brand loyalty.

What are the Key Challenges for Scrubber Dryer Manufacturers?

A significant surge in the taxes and prices of scrubber dryers has affected demand for the product. High maintenance cost and automation of these machines make it difficult for many users to afford them.

North America, especially the U.S., sees the highest demand for scrubber dryers, due to extensive presence of manufacturers in the region. Advanced infrastructure and higher per capita spending on household appliances have made North America among the leading manufacturers as well as consumers for scrubber dryers. The region accounts for around one-third of the global market share.

Europe is prominent in the terms of value and volume, holding the second position after North America. Germany accounts for the highest share, which was around 23% in the year 2020. Utilization at airports and railway stations is expected to increase at a CAGR of around 8% from 2021 to2031. 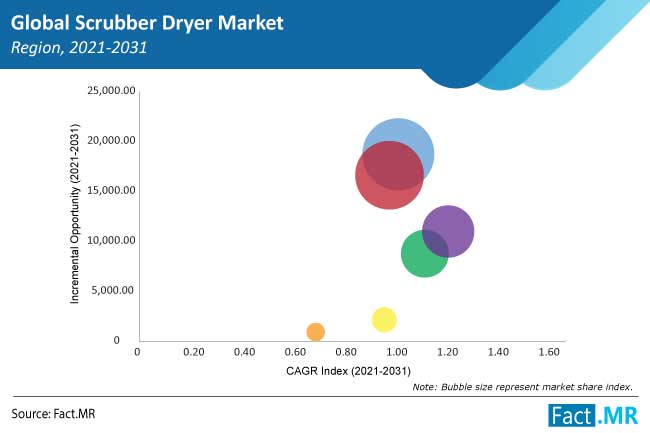 What Makes the U.S. the Growth Epicenter for Scrubber Dryers?

The U.S. remains the major contributor to the growth of the market, as there are around 130 Mn units of scrubber dryers sold annually in the country. The U.S. accounted for US$ 1.1 Bn market value in the year 2020. Increasing population, abundance of raw material, and early development have set the stage for the U.S. to be the most attractive market for scrubber dryers.

Why Does the United Kingdom Have a Huge Market for Scrubber Dryers?

In terms of output, the United Kingdom ranks second. Manufacturers of scrubber dryers have set up facilities to meet demand on the spur of the moment, providing the industry with a significant growth platform for the country. The market in the United Kingdom is expected to create an absolute $ opportunity of nearly US$ 253 Mn over the forecast period.

Will Demand for Scrubber Dryers Keep Increasing in South Asia?

With increasing construction units and elevated standards of living, demand for household as well as commercial scrubber dryers is rising across India. There has been a slight shift in consumer sentiments from traditional cleaning equipment to scrubber dryer.

Walk-behind scrubber dryers have the highest demand from various end-use industries, and this segment is expected to offer an absolute dollar opportunity of around US$ 1.9 Bn over the next ten years.

Walk-behind dryers hold 44.5% share of the market due to ease of use and availability in compact sizes. Manufacturers are adding advanced technology such as eco-efficient modes for water conservation in these models.

Various government regulations regarding environmental safety and increasing health concerns are creating need for the development of scrubbing pads that have anti-microbial properties.

How Big is the Opportunity for Battery-operated Scrubber Dryers?

As there is no cable attached, there are fewer chances of any hazards. According to health and safety executives, the common causes of injury at the workplace are slips and trips, which costs around US$ 688 million per year to the industry.

The battery-operated scrubber dryer segment is anticipated to expand at a CAGR of more than 7% over the forecast years, offering an absolute dollar opportunity of around US$ 1 Bn in the same time period.

Will the Eco-efficient and Compact Size of Scrubber Dryers Aid Demand Growth?

Usually, people use large-sized machines or traditional cleaning equipment for cleaning purposes. The trend in the market for the development of compact-sized machines is popular in region such as North America and Europe due to higher standards of living.

The market will be able to sustain itself in the future due to rising demand for compact scrubber dryers.

How Has COVID-19 Impacted the Sales of Scrubber Dryers?

Pandemics such as COVID-19 are unforeseen and affect all leading economies of the world. COVID-19 has also resulted in impacting demand for scrubber dryers across geographies, though in a positive manner.

Demand for scrubber dryers has increased during the pandemic because of increased consumption in end-use industry for cleaning and hygiene purposes. The market is expected to grow 2.1X by 2031.

Aforementioned players rely on a blend of organic and inorganic strategies to increase penetration across lucrative markets. These strategies include product launches, collaborations and partnerships with prominent scrubber dryer manufacturers and suppliers, acquisitions, and strengthening of regional and global distribution networks.

Similarly, recent developments related to companies manufacturing scrubber dryers have been tracked by the team at Fact.MR, which is available in the full report.

Fact.MR projects the market to register a CAGR of close to 8% by value across the 2021-2031 assessment period. Higher penetration of walk-behind scrubber dryers will bolster demand over the coming years.